Special Forces: For the extreme soldier 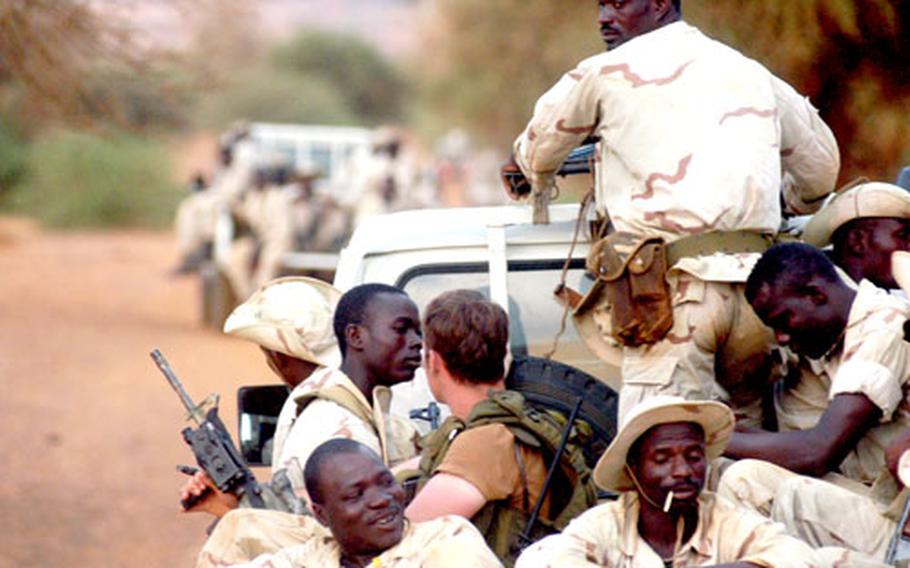 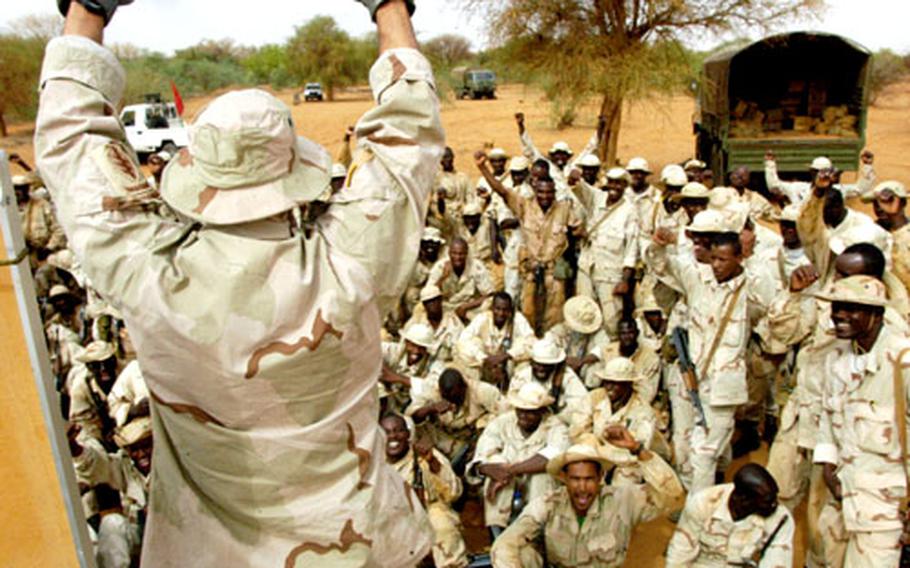 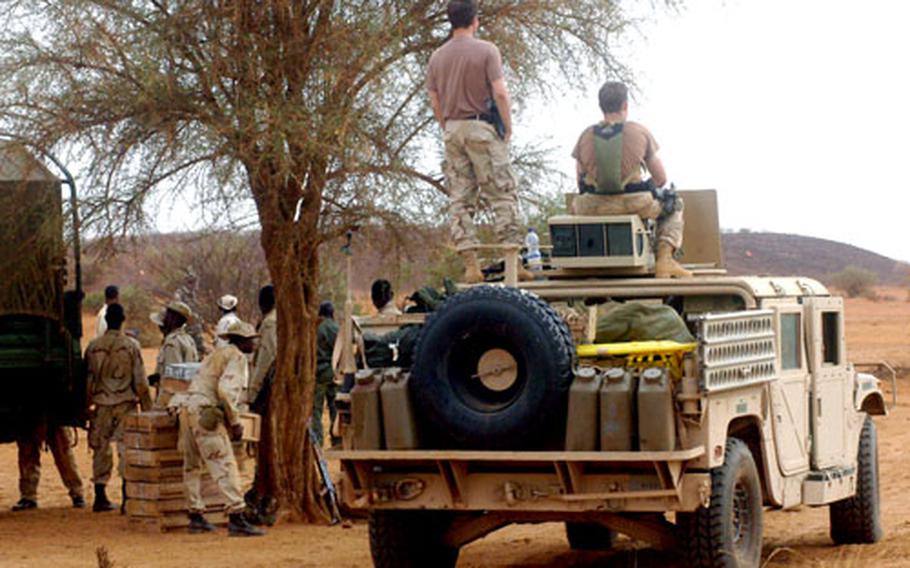 Green Berets watch as Nigeriens unload ammunition from a truck prior to their live-fire exercise. (Charlie Coon / S&S) 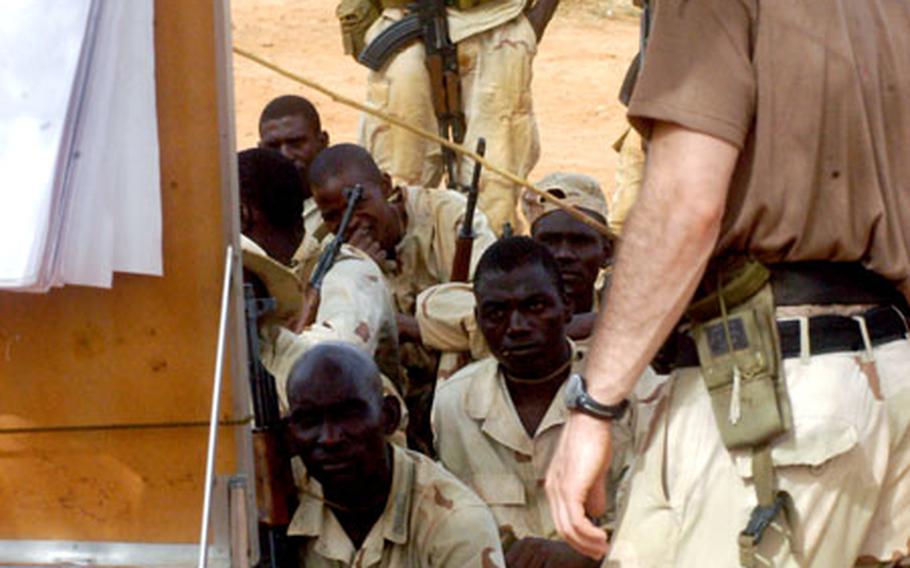 TAHOUA, Niger &#8212; The three U.S. soldiers were driving through town when they pulled off the main drag &#8212; several blocks of one-story buildings made of adobe, branches and sheet metal &#8212; to pick up a passenger.

A man named Benjamin who spoke English hopped into the SUV and they exchanged big smiles and &#8220;How ya doing?&#8221; They then drove to a dusty shop where scraps of metal were strewn on the floor among drill presses and welding equipment. Normally the shop would have been closed on a Sunday, but these were special customers.

Inside the shop, the soldiers drew a sketch and used hand gestures and their new interpreter, Benjamin, to explain the job. They wanted to build a gun mount and have it bolted onto the bed of a white, four-wheel-drive pickup truck.

As the men huddled, Johnny, a 25-year-old Green Beret staff sergeant, told the group, which included a few soldiers from Niger, to &#8220;think like a soldier.&#8221; The gun must be able to fire up, down and around at the enemy, he said. It must be adjustable, too, so both tall and short soldiers could use it.

Six hours later, the Nigerien soldiers locked one of their German-made MG-3 machine guns on top of the mount. The gun slid into place and pivoted smoothly. Everyone smiled and shook hands.

While the design now belonged to the army of Niger, the operation was typical &#8220;SF.&#8221; Find someone who speaks the local language, the resources to do a job, and then get it done.

The Green Berets, known formally as U.S. Army Special Forces, or SF, are paid to work outside the box. As a group, members have mastered weapons skills, tactics and engineering. But they want more. They feel restricted by conventional Army ways, and are drawn to the excitement of special operations. Some say they are impressed by the &#8220;adult&#8221; way special operators are treated.

So they bolt for Special Forces qualifying school.

They call themselves achievement-oriented, impatient doers. The sometimes towering bureaucracy of the regular Army didn&#8217;t fit their personalities. Special Forces provided both an outlet and a niche for their mojo.

Not that they&#8217;re cowboys, a tag that once may have been true among special operators.

Discipline to learn foreign languages, to keep cool like a diplomat, to be engaging. Time and again they are reminded by their commanders that, while performing missions inside foreign countries, they are the face of America.

The Green Berets travel in small teams, often performing missions that are secret and potentially dangerous. So they shun publicity, reflexively ducking their faces when the cameras come out.

If the Green Berets can help prevent &#8220;good&#8221; governments from being toppled or &#8220;bad&#8221; ones from existing, or if their small teams can eliminate the need for larger U.S. deployments, the quiet professionals have done their jobs.

The U.S. government deems north-central Africa to be a potential breeding ground for insurgents. Like in Afghanistan, the poverty, unstable governments and hundreds of miles of ungoverned territory make it a possible destination for extremist Muslims and others who could exploit the region.

On June 4, for example, Algerian-linked extremists who were believed to have traveled through the Nigerien desert stormed a Mauritanian army camp and killed 15 soldiers.

Green Berets all say they respect their comrades in the regular military.

SF troops on the ground counter by saying they&#8217;re just doing what they&#8217;ve got to do to win friends and influence foreign people. Beards, for example, are a symbol of manliness to Afghans. From a distance, they help special operators blend in, Tim said.

Chris, the captain and a team leader with the 10th SFG, said it&#8217;s better for SF guys not to bring home their work.