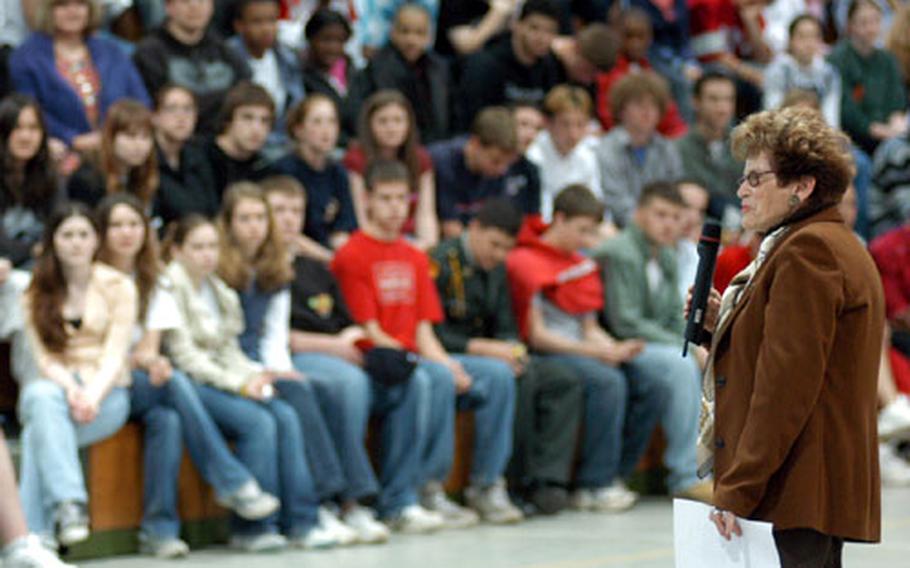 Rachel Dror, whose parents were killed in Auschwitz during the Holocaust, tells a packed gym of students at Stuttgart’s Patch High School how Nazi guards ransacked her house and forced her to flee Germany when she was in her teens. (Ben Murray / S&S)

STUTTGART, Germany &#8212; It was a chilling thought for students at Patch High School: Teenagers much like themselves suddenly became the target of genocide.

Sixty years ago in Stuttgart, teens might go home from school to find friends, sometimes parents, missing, their homes destroyed and the police looking for them.

It was that kind of ordeal that Holocaust survivor Rachel Dror endured when she was a young girl in Stuttgart during the rise of the Nazi party. During a Holocaust remembrance Wednesday, Dror told Patch students what it was like as a Jewish teen in those days. Her message hit close to home.

Dror spoke about how she was forced to flee Germany for Palestine as Nazi persecution increased in the early 1940s, leaving behind family and friends whom she would never see again.

Her talk was part of the school&#8217;s weeklong &#8220;Days of Remembrance&#8221; program to study the Holocaust on the 60th anniversary of the liberation of some concentration camps at the end of World War II. She spoke to a packed Patch gymnasium, along with Helene Schneiderman, a professional opera singer whose parents survived internments in German concentration camps.

But while Dror relayed some harrowing stories &#8212; including one involving her parents&#8217; death &#8212; it was her recollections of the events leading up to the genocide that resonated with the audience.

Freshman Lauren Goodwin, 14, wondered what she would do if, like Dror, she went home to find a friend missing, her house ransacked by government police. Thinking about her own possible reaction to that situation, &#8220;really brings a reality to it,&#8221; Lauren said.

Others were disturbed by Dror&#8217;s story of how Jewish kids were eased into a sense of complacency about being discriminated against because of their faith. Dror told of how she and other students were first segregated from non-Jews at school, then later came to accept rules against interacting with other children.

A pint-size woman with a heavy German accent, Dror brought tears to the students&#8217; eyes when she told of how her mother and father were separated at the gates of Auschwitz.

Her father was put in one line because he was healthy enough to work, and her mother in another, she said. But the two wouldn&#8217;t leave each other, and in the deepest silence of the presentation, Dror told of how her father removed himself from the workers&#8217; line and rejoined his wife in the one that &#8220;went straight to the stove.&#8221;

After Dror&#8217;s talk and several readings by Patch students, Schneiderman sang a Hebrew song that held the assembly rapt. Schneiderman, whose parents survived stays in the notorious Dachau and Buchenwald concentration camps, said presentations such as the Patch program are important for today&#8217;s youth.