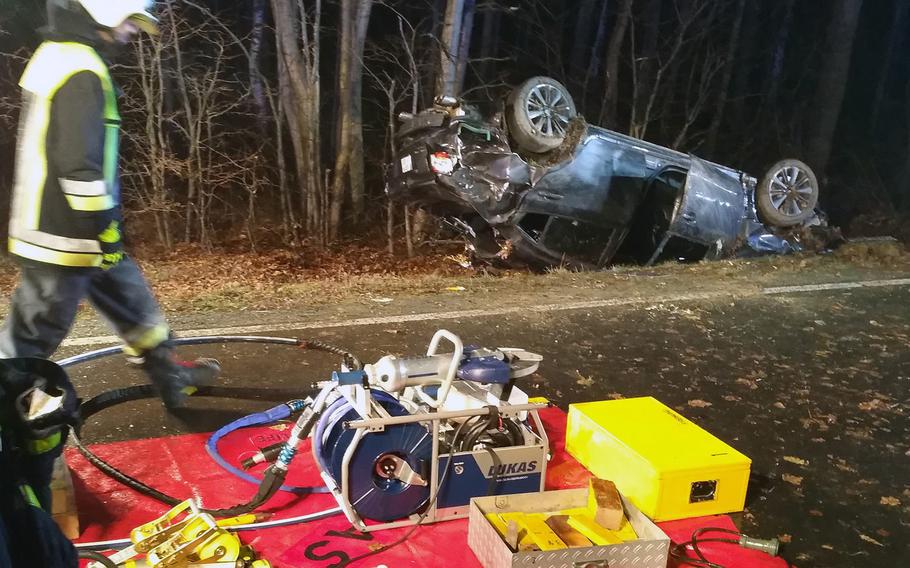 A 22-year-old soldier stationed in Vilseck, Germany, was killed on March 18, 2017, in a car accident near the Grafenwoehr Training Area. Recently there were three DUIs in one day involving Americans in the Grafenwoehr area. (COURTESY OF THE FREIHUNG FIRE DEPARTMENT )

In a recent string of incidents on Sunday, German police said they pulled over three cars where the drivers — all U.S. soldiers — were under the influence of alcohol.

Unlike in Japan or South Korea — where an arrest involving a U.S. servicemember can trigger large protests and public apologies from flag-level officers — Germany rarely sees local rancor directed toward the U.S. military. U.S. personnel and their families outnumber Germans in some towns, which gain large economic benefits from their presence.

Nevertheless, U.S. officials are aware that such incidents can inflame sensibilities if they go unchecked.

“Community security is my number one priority as garrison commander,” Col. Lance Varney, USAG Bavaria garrison commander said in a statement Thursday following questions from Stars and Stripes. “We are very closely integrated with the German authorities and their emergency management systems. Together, we meet regularly and maintain a strong relationship.”

The 19-year-old was turned over to military police and his car was confiscated.

According to German law, driving with a blood alcohol level of 0.11 or above is considered a more serious criminal offense.

Eschenbach Deputy Chief of Police Armin Bock said one of the reasons that U.S. soldiers are found driving under the influence of alcohol was “the rotation of the troops.”

“New soldiers come here quite often,” he said. “Often, they are not sensitive enough to how Germany is treating drivers who are caught behind the wheel when they are drunk.”

He also said that there were many young soldiers who sometimes were not mature enough to understand the risks of drinking and driving.

Bock said the German police are in close cooperation with military police. Both the Germans and the military police will revamp their education and prevention programs, he said. Bock declined to provide numbers on DUIs over the past few years involving servicemembers because he said the police would not want to make soldiers look bad.

More Americans get arrested for DUIs than Germans around Grafenwoehr, Bock said, but he added that Americans considerably outnumber the German population in the area.

Garrison figures provided for November of last year and this month through Nov. 29 show little change in incidents. There were 24 combined incidents of assault, DUI and drunk and disorderly conduct last year in Bavaria involving U.S. personnel, compared to 26 this month.

“And while the numbers don’t indicate a spike in DUI’s, we have an obligation to ourselves and to the citizens of Bavaria to reduce and eliminate all cases of drinking and driving,” said Lt. Col. Mike Burden, the garrison’s director of emergency services, in a statement.

The garrison’s efforts at combating drinking and driving include discussions by military police on American Forces Network Radio, joint courtesy patrols and on-post checkpoints, among other actions, he said.

In March, a U.S. soldier with a blood alcohol content of .096 caused an accident in which another soldier died and two others were seriously injured. Spc. Tyler Vaughan, a 22-year-old soldier stationed in Vilseck, Germany, died when the vehicle veered off the road and rolled into a tree near the Grafenwoehr main gate.