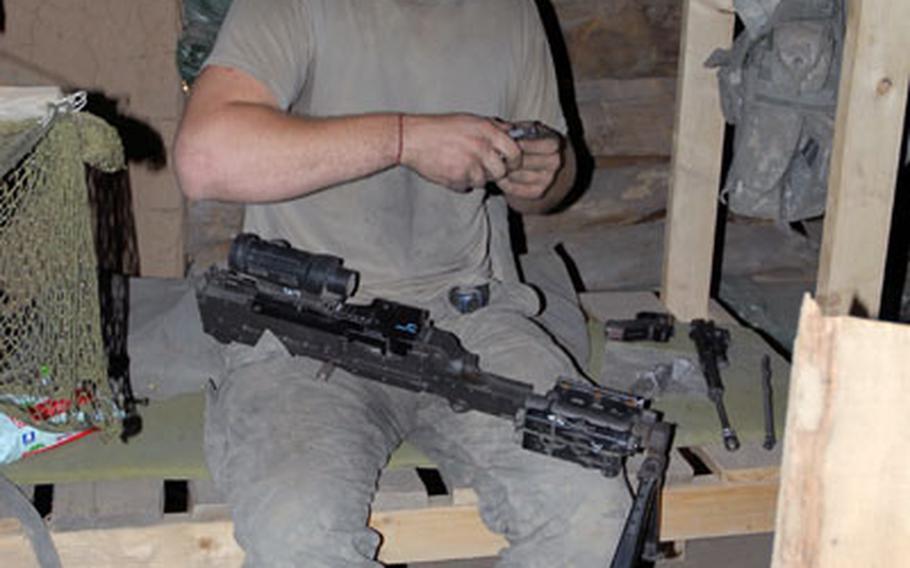 Pfc. Carl Vandenberg, 20, cleans his M-240B, which weighs 35 pounds when loaded, on Monday, hours after he and other members of his platoon came under intense fire at Fire Base Phoenix. At 6 feet, 5 inches, and over 250 pounds he&#39;s the biggest man in his company. (Mark St.Clair / S&S) FIRE BASE PHOENIX, Afghanistan &#8212; The firefight lasted an hour, and by the end, thankfully only one man was wounded.

Sitting almost 1,500 meters high on a steep hill in the Korangal River Valley in eastern Afghanistan, above the towns of Babeyal, Ali Bad and Darbart, Phoenix might not rise far enough. It&#8217;s surrounded on all sides by hills and ridgelines almost 250 meters higher. Fire on Sunday was coming from the south, east and southwest, and from below, near places nicknamed Table Rock, Nipple Rock and Honcho Hill.

Intelligence from the platoon of 10th Mountain Division infantrymen, whom the Spartans replaced, said enemy fighters farther up the valley liked to attack at dusk. After being on Phoenix nearly two months and seeing only one small burst of enemy fire on the base, some of the Spartans had begun to wonder whether having every man pulling security was worth it.

But sure enough, 10 minutes before the troops manned their positions, all hell broke loose.

Running to get their helmets and body armor, men were donning each other&#8217;s gear, protecting themselves as soon as possible.

Hit immediately was Staff Sgt. Ramon Padilla, a 32-year-old father of four and the Spartan third squad leader. Wounded in the head and left hand, pinned down by fire and too dazed to move, he shouted, &#8220;Man down! Man down!&#8221; and waited for help.

As bullets made the dust around their feet come alive, Sgt. Daniel Richardson, 22, closely followed by Spc. Aron Hijar, 24, picked up Padilla and moved him under cover.

Up and talking the entire time, shortly after receiving first aid from his buddies, Padilla was on his way down the mountain, en route to Jalalabad Air Field and the 173rd Airborne Brigade Combat Team medical assets there.

In the controlled chaos that followed Padilla&#8217;s removal, the men began sorting out whose weapon or helmet was whose and resupplying each other with ammo and water, every man firing hundreds of rounds.

As platoon leader 1st Lt. Matt Piosa, 24, was calling back to company headquarters and watching from above, Staff Sgt. Matthew Simon, the second squad leader and senior enlisted man on-scene, led the men on the lower portion of the base.

Piosa said because many of the Spartan senior enlisted leaders &#8212; including the platoon sergeant &#8212; were away on other missions, men like Simon, 31, and Spc. Brendan O&#8217;Byrne, 23, stepped up and took charge.

For more than two hours after the fight, and under cover of darkness, the men with Simon monitored hills, draws and spurs with night-vision devices, looking for enemy activity. When men carrying flickering flashlights were seen less than 50 meters from Phoenix and in locations enemy fighters have been before, Simon was given the go-ahead to tell his men to shoot. The lights went out.

It was only the second time Phoenix has been hit directly since the Spartans moved in, though the men have taken fire on many of their patrols.

Because of the terrain, the Spartans said it&#8217;s almost impossible to tell how many enemy fighters there were or still are in the valley, and that it&#8217;s relatively easy for them to crawl up over a ridgeline and &#8220;spray and pray&#8221; or make more coordinated efforts like those Sunday.

Simon said because some recent Spartan patrols have been in territory the enemies deem their own, they might be becoming more aggressive. And even though the militants wounded only one person, radio chatter might claim they killed as many as 45 to boost their morale.

As Phoenix is the southern-most outpost for Company B, it&#8217;s in one of the most dangerous locations. Padilla is the second Spartan who has been wounded. Pfc. Timothy Vimoto, 19, the son of 173rd sergeant major Command Sgt. Maj. Isaia Vimoto, was killed on June 5.