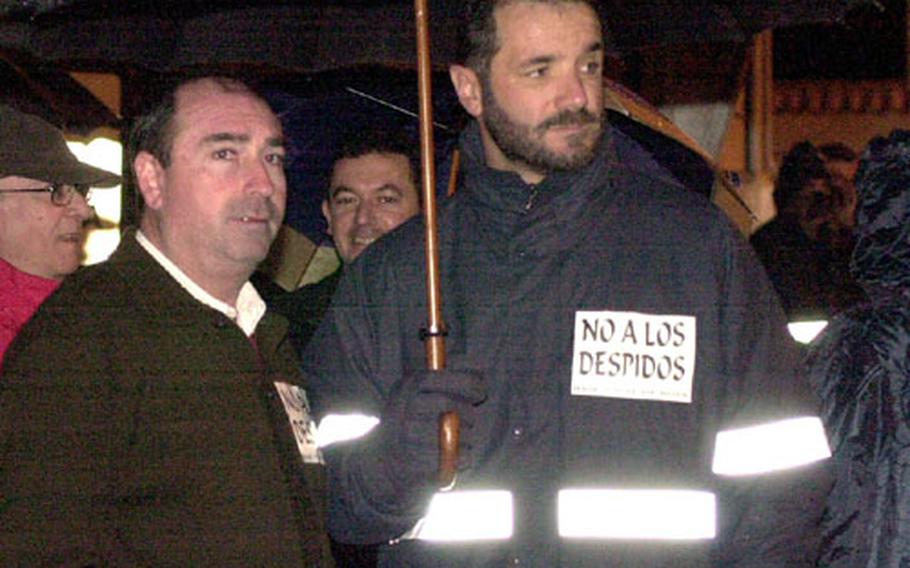 Spanish workers stand outside the “Rota Gate” at Naval Station Rota, Spain, to protest possible workforce cuts during a demonstration Tuesday morning. The workers claim that the U.S. military wants to eliminate the jobs of 75 Spanish civilians who work at the base. (Scott Schonauer / S&S)

Workers were protesting potential job cuts by the U.S. military. Employees claim that as many as 75 jobs could be lost as the U.S. Navy tries to find ways to be more efficient and save money at installations throughout Europe.

The U.S. Navy said Tuesday that it has not determined if any Spanish jobs would be cut.

&#8220;The United States Navy has not presented the Spanish Ministry of Defense with any specific plan or number for reduction in number of Spanish employees,&#8221; base spokeswoman Lt. Allie Freeman said in a statement to Stars and Stripes.

Rota police diverted traffic away from the gate, and base officials opened up a fourth gate to ease early-morning traffic in and out of the naval station.

The base radio station instructed Americans trying to enter the base to avoid the demonstration and pass through one of the other gates.

Unless employees see improvements during negotiations, union leaders said they would continue to hold similar protests. However, they did not give any details.