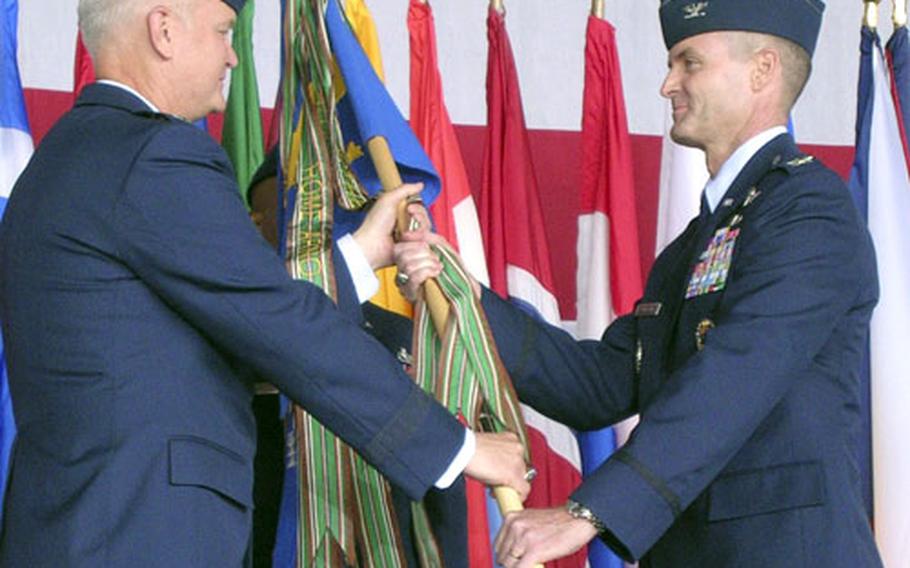 SPANGDAHLEM AIR BASE, Germany &#8212; Remember the past. Rule the present. Reach for the future.

That&#8217;s what the new commander of Spangdahlem Air Base&#8217;s 52nd Fighter Wing is asking of his airmen.

Air Force Col. Darryl Roberson officially assumed command of the 52nd Fighter Wing from Col. David L. Goldfein during a change-of-command ceremony Friday morning at the base. The 52nd Fighter Wing boasts F-16CJ Fighting Falcons and A-10/OA-10 Thunderbolt II aircraft and is the only Air Force fighter wing in Germany.

In his farewell speech, Goldfein, the fighter wing&#8217;s commander since July 2004, told airmen that they had accomplished great things during the past two years.

Roberson, an honors graduate from the U.S. Air Force Academy, comes to Spangdahlem from the Pentagon, where he was assistant deputy director for anti-terrorism and homeland defense in the office of the Joint Chiefs of Staff directorate for operations.

Shortly after taking command Friday, Roberson had already scored some points with German guests in attendance.

His statement was met by loud applause.

The new commander then addressed the airmen.

Airmen, including A-10 pilots, from the 52nd are serving in Operation Enduring Freedom. Spangdahlem Air Base is home to about 5,000 servicemembers and about 10,000 Americans.