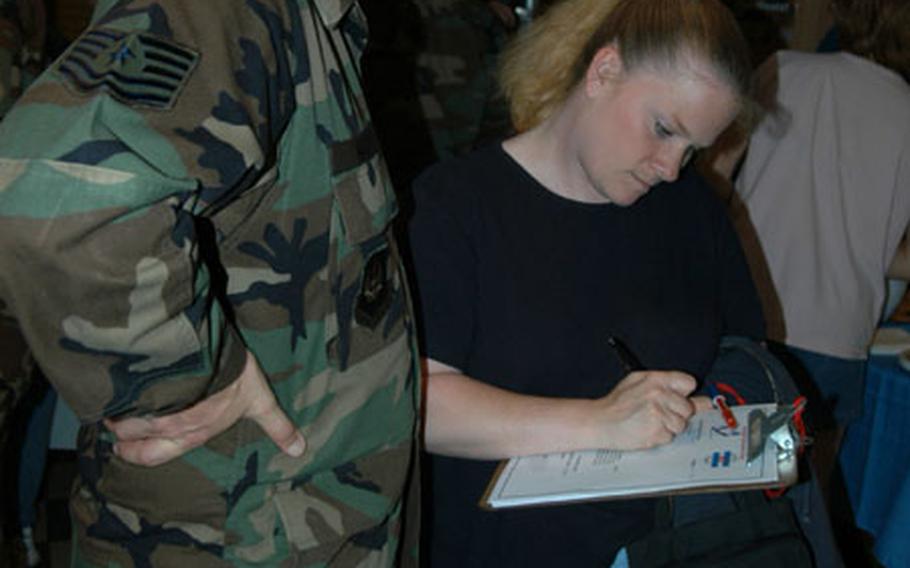 Shari Nance fills out a form so she can stay in touch with other spouses when her husband, Tech. Sgt. Randy Nance, left, goes downrange. Nance, of Spangdahlem&#39;s 606th Air Control Squadron, is deploying in the next AEF rotation. (Marni McEntee / S&S)

SPANGDAHLEM, Germany &#8212; Nearly one-fifth of Spangdahlem&#8217;s troops are deploying for up to six months in the coming weeks, but base leaders promised Thursday that no family would be left behind.

At a town meeting in the base theater, leaders rolled out a well-organized support system that includes a spouses&#8217; network, German contacts in the community, special deals on base services and even a few luxuries such as a spa night and discounted day trips for families of deployed troops.

&#8220;No one in our wing goes through this deployment alone,&#8221; 52nd Fighter Wing Commander Col. David Goldfein said.

Experts also walked families through the mountain of paperwork that must be done before a deployment, such as getting a power of attorney and a will, making sure the vehicle is registered, and registering with the American Red Cross in case of an emergency.

The support system falls under the Combat Care program, meant to give families the care and information they need during all phases of the deployment. Every spouse who attended got a Combat Care button that entitles them to all kinds of benefits, including:

&#8226; Going to the front of the line at the post office, base exchange and other facilities.&#8226; Shopping early (9 a.m.) at the commissary.&#8226; Free oil changes up to $21.95 and a car safety check at Army and Air Force Exchange Service garages.&#8226; Five hours of free child care.&#8226; Payment for some college course fees from the Air Force Aid Society.&#8226; Deployed Family Days at the bowling alley, with half off all games and shoe rental.&#8226; Ten percent discount on repairs at the auto skills center.&#8226; Discount movie rentals.

About 1,000 of the wing&#8217;s airmen are deploying as part of the Aerospace Expeditionary Force rotation. Most will be gone for four months, but some high-demand troops could go for six months or more.

At the meeting Thursday, Denice Miller, whose husband Master Sgt. Christopher Miller is deploying with the 52nd Maintenance Squadron, said she&#8217;s gone through the deployment separation a couple of times already.

She only wished more spouses new to Air Force life had been at the meeting.

Goldfein said troops who remain at Spangdahlem aren&#8217;t getting off the hook.

&#8220;They&#8217;ll be working triple duty,&#8221; to make up for the troops downrange, he said. He&#8217;ll be monitoring services to maintain the highest standards possible, despite a reduced number of people to do the job, he said.