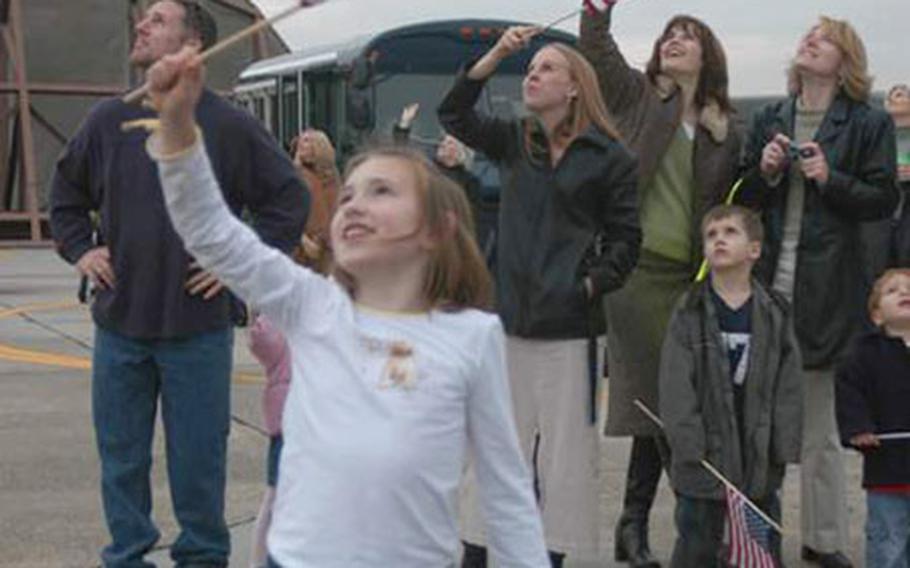 Stephanie Ramer, 8, watches as several A-10 Thunderbolt II airplanes fly over Spangdahlem Air Base on Monday. The last eight members of the 81st Fighter Squadron returned from Bagram, Afghanistan, after a six-month mission. (Marni McEntee / S&S)

Stephanie Ramer, 8, watches as several A-10 Thunderbolt II airplanes fly over Spangdahlem Air Base on Monday. The last eight members of the 81st Fighter Squadron returned from Bagram, Afghanistan, after a six-month mission. (Marni McEntee / S&S) 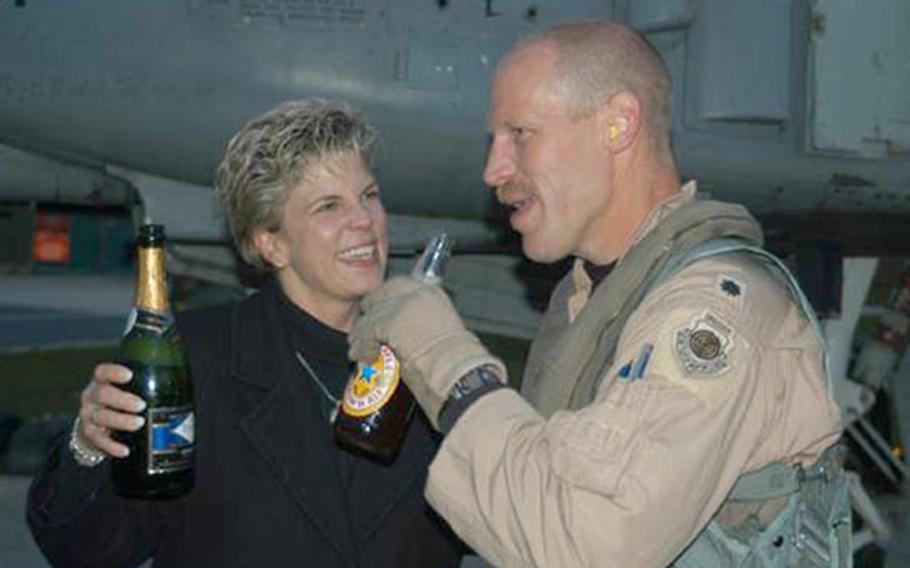 Lt. Col. Patrick Malackowski and his wife, Carol, share a drink after he returned Monday from Bagram, Afghanistan. Malackowski, commander of the 81st Fighter Squadron, returned with seven others from the squadron - the last of the squadron to finish the six-month deployment. (Marni McEntee / S&S)

SPANGDAHLEM AIR BASE, Germany &#8212; After circling their A-10 Thunderbolt IIs above Spangdahlem Air Base in a traditional &#8220;We&#8217;ve returned&#8221; formation, the final eight members of the 81st Fighter Squadron touched down on home turf Monday.

A bevy of wives, kids and squadron mates waved U.S. flags for the pilots as they taxied their fighters down the runway, the last stretch back to their homes after a six-month deployment to Bagram, Afghanistan.

&#8220;I feel excited and humble and proud and in love,&#8221; said Carol Malackowski, who greeted husband Lt. Col. Patrick Malackowski, commander of the squadron, as soon as he jumped from the last rung of his aircraft&#8217;s cockpit ladder.

Soon the couple was celebrating with a little champagne and a little beer. But that was about all the revelry they expected Monday night.

The return of the 81st, whose remaining 300 members have come back in dribs and drabs since mid-October, marks a step closer to normalcy at Spangdahlem, home of the 52nd Fighter Wing, wing commander Col. Stephen Mueller said. An average of about 10 percent of the base&#8217;s 5,000 airmen have been deployed at one time or another since January.

Between February and June, roughly 20 percent of the base&#8217;s airmen were gone due to the war in Iraq, Mueller said.

&#8220;We&#8217;re reuniting people with their families after they&#8217;ve seen some sacrifices in order to do their mission,&#8221; Mueller said. About 100 Spangdahlem airmen are still deployed in various missions around the theater.

The 81st Fighter Squadron flew nearly every day while on duty in Afghanistan in support of Combined Joint Task Force 180 and Operation Enduring Freedom, Malackowski said.

It did its signature mission as close-air support for ground troops, occasionally taking enemy fire in skirmishes with Taliban forces, said Maj. Michael Young, a pilot who returned Monday. All planes and airmen made it back safely, and no one was injured.

Young met his wife, Joanne, and children, Shelby, 10, and Mason, 6, at the flight line.