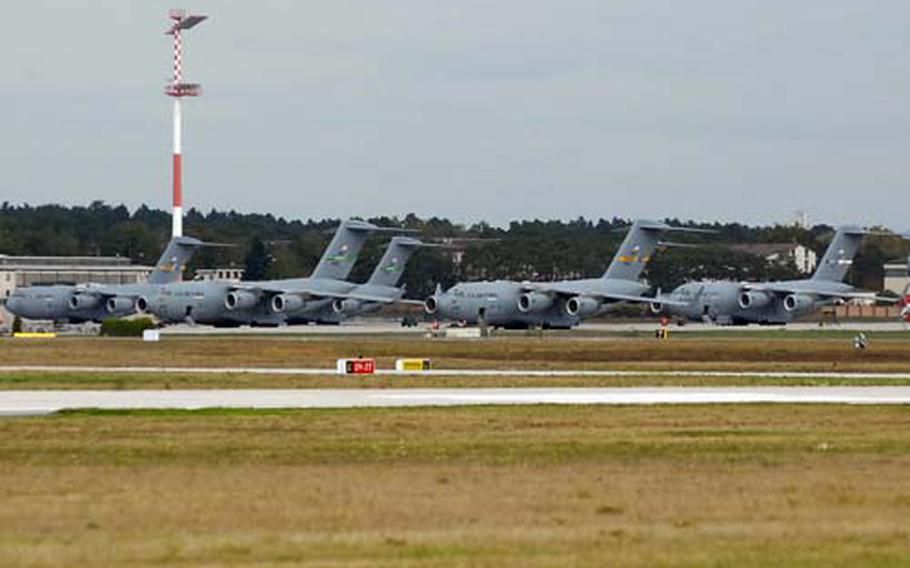 A flock of C-17 Globemaster IIIs sits on the flight line at Ramstein Air Base, Germany. Ramstein and Air Base will see an increase in heavy-lift operations starting in early February, due to the troop increases in Afghanistan. (Michael Abrams / S&S)

KAISERSLAUTERN, Germany &#8212; Nighttime and early morning flights at Ramstein and Spangdahlem air bases in Germany will noticeably increase over the next seven months as the military ferries additional troops and equipment to Afghanistan, U.S. Air Force officials said Friday.

The bases&#8217; airfields are typically less busy at night, with quiet hours enforced except for emergency or mission-essential flights. But starting next week and continuing until August, more large aircraft will be taking off and landing seven days a week, including during the base&#8217;s normal &#8216;quiet hours&#8217; between 10 p.m. and 6 a.m. Flights usually are limited on Sundays and German holidays.

The aircraft missions are tied to the 30,000-U.S. troop buildup in Afghanistan announced by President Barack Obama in December, Air Force officials said. About half the additional airlift missions will go through Ramstein and Spangdahlem, said Aaron Schoenfeld, an 86th Airlift Wing spokesman at Ramstein.

On average, Ramstein will see an additional eight flights per night, and Spangdahlem four, Schoenfeld said. Those numbers include return flights from Afghanistan.

Nighttime arrivals and departures will be necessary during the surge period because "we&#8217;re trying to accommodate their ability to receive and launch aircraft in Afghanistan," Schoenfeld said. "Flights need to be spread out."

Ramstein and Spangdahlem will serve mostly as pit stops where aircraft can refuel and crews can rest, Schoenfeld said. The military&#8217;s heavy lifter, the C-17, is expected to carry the bulk of the cargo into theater.

But some residents said Friday that they&#8217;re irritated by the prospect of more aircraft noise.

"I just do not get it," said Doris Emrich, a leader of a local citizens group against aircraft noise. "We live in an area at which the impact of aircraft noise is already higher than anywhere else in Germany."

Emrich, who lives in Dansenberg, southwest of Kaiserslautern, said her group doesn&#8217;t believe there will be only eight additional flights at Ramstein.

"We know when military authorities speak of eight night flights, it will be 10, 12 or 15."

Because flying patterns into Spangdahlem won&#8217;t change, the same neighboring towns that experience current aircraft noise may be affected, Polesnak said. Those include Spangdahlem, Speicher, Binsfeld and Beilingen.

As for the potential impact to Ramstein-area communities, Schoenfeld said there&#8217;s "no good way to answer that," as flight patterns depend on current wind direction, weather conditions and other variables.