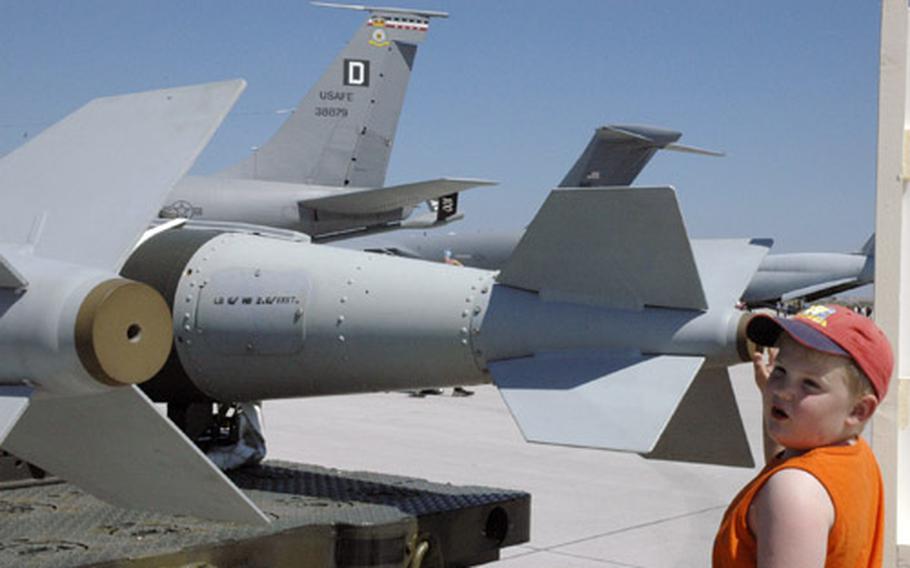 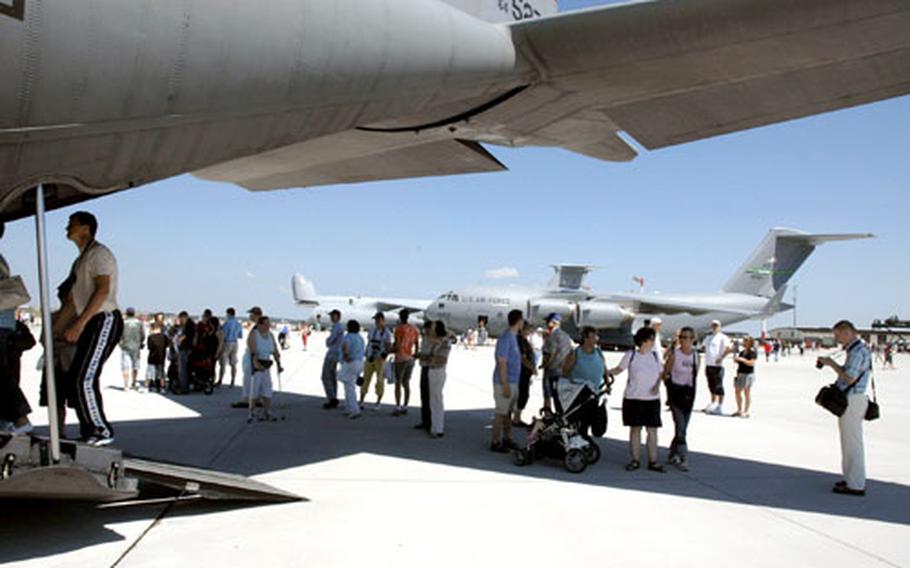 The shadow of the tail of a C-130 plane offers spectators some protection from the blazing sun as temperatures reached in the high 80s at Saturday’s open house event at Spangdahlem Air Base, Germany. (Robin Hoecker / S&S) Lt. Col. Angel Diaz, 52nd Wing operations commander, stands in front of a C-5 and a C-17 plane, which were on display at Saturday’s open house at Spangdahlem. (Robin Hoecker / S&S) Members of the Thörnich family — Klaus, Timo, Linda and Nico — walk along the tarmac at Spangdahlem Air Base, Germany, during the base’s open house Saturday. They were excited to see the large planes, such as the C-17 behind them. (Robin Hoecker / S&S)

SPANGDAHLEM AIR BASE, Germany &#8212; After seeing Air Force planes fly over their homes every day, residents living near Spangdahlem Air Base finally got to see the mechanical beasts up close Saturday.

For the first time in eight years, and the first time since the Sept. 11, 2001 attacks on the U.S., members of the 52nd Fighter Wing invited their neighbors to an open house, the only one of its kind among U.S. Air Force bases in Europe, said Iris Reiff, public affairs officer at Spangdahlem.

The open house occurred every year until 1998 when Spangdahlem&#8217;s workload increased as Rhein-Main Air Base near Frankfurt began to close. After 9/11, the event was put on hold.

Some of the most popular attractions at the one-day event were the large aircraft, the C-5s and C-17s, which were open for people to board and explore. The 2005 opening of the Air Mobility Command at Spangdahlem allowed the airport to handle the bigger planes.

Seeing all of the planes and the bombs reminded Gierenz&#8217;s father, Karl, of World War II, which he lived through as a boy.

Signs of cooperation and friendliness between Germans and Americans were everywhere.

Visitors spoke both German and English as they mingled among the booths and displays; American and German flags stuck out of people&#8217;s hands and out of back pockets. Bilingual vendors served bratwursts with both ketchup and mustard, and accepted payment in dollars as well as euros.

Planning for the event began in January under the command of Col. Dave Goldfein, who left on June 23 to become commander of Holloman Air Force Base in New Mexico. He was replaced by Col. Darryl Roberson.

Much of the preparations focused on security issues. Every person coming to the event was searched and screened. Bags, bottles and pets were not allowed.

&#8220;We wanted to make sure it&#8217;s safe,&#8221; Diaz said. Military police worked with German police officers and medical teams to make sure the event ran smoothly. At noon, everything had run according to plan, except for a brief power outage that made people wait a few minutes longer for their bratwursts.

Those attendees without a military identification card had to enter by a separate entrance, where the line of cars backed up along the road.

Klaus Gillen and his 7-year-old grandson, Dennis, from Seffern, waited more than an hour to get through security.