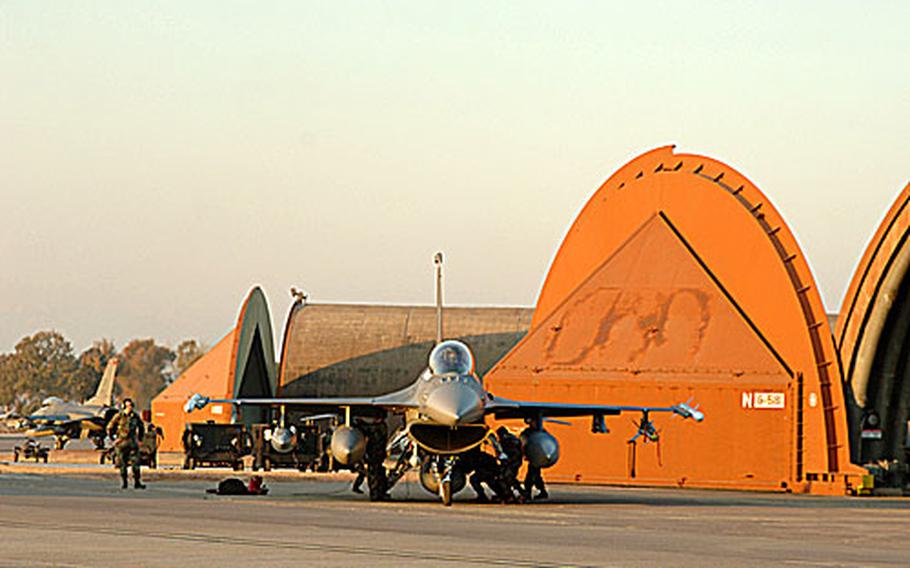 Maintainers from the 52nd Aircraft Maintenance Squadron from Spangdahlem Air Base in Germany attend to a F-16CJ Fighting Falcon after it landed at Incirlik Air Base, Turkey, last week(Jan. 8). The 22nd Fighter Squadron deployed here as part of a rotational squadron deployment. (Courtesy of U.S. Air Force)

The familiar roar of F-16 fighter jets is back at Incirlik Air Base in Turkey.

U.S. warplanes from Spangdahlem Air Base&#8217;s 22nd Fighter Squadron are at the Turkish base as part of a new training deployment.

It is the first squadron to rotate in and out of the base since the Air Force stopped enforcing the no-fly zone nearly four years ago.

The base served as a launching point for fighter jets enforcing the no-fly area over northern Iraq between 1997 and the beginning of the Iraq war in 2003. Large cargo aircraft have since replaced those fighters.

About 250 airmen from the Germany-based squadron are in Adana to take advantage of the area&#8217;s great flying conditions this time of year, said Lt. Col. David Youtsey, commander of the 39th Operations Squadron at Incirlik.

The airmen plan to stay at the base for the next three weeks. They will be replaced by its sister squadron, the 23rd Fighter Squadron, which plans to stay there the same length of time.

&#8220;The weather is really good this time of year,&#8221; Youtsey said. &#8220;Obviously, that&#8217;s the main reason for the guys at Spangdhalem to leave their home station. There&#8217;s flying and training they need to stay proficient that they cannot get during the winter time months in Germany just due to the weather.

&#8220;Meteorologically speaking, we&#8217;ve got weather down here that helps them meet their training objectives.&#8221;

Although Germany has had a warm winter this year, winter often is not kind to pilots who need time in the cockpit.

It&#8217;s not unusual for fighters to deploy to Incirlik for training. U.S. fighter jets regularly participate in the Turkish Anatolian Eagle exercise at Konya. But those numbers are a far cry from the days before the war.

Before U.S. forces invaded Iraq more than three years ago, as many as 50 U.S. and allied jets were stationed at the base at any time. The last no-fly mission was flown right before coalition forces entered Iraq in March 2003.

Since that time, the base has seen few if any fighter jets and the base decided to upgrade some of the facilities for the airmen coming for training. The Air Force upgraded the squadron operations center and refurbished other base facilities to accommodate the pilots and maintainers.

&#8220;The objective was to make it look as much like their home station squadron as possible so it&#8217;s comfortable and meets all their needs,&#8221; Youtsey said.

No other units are scheduled to travel to the base for training. But Youtsey said the hope is that other units in Europe or elsewhere could go to Turkey to hone skills in the future, adding that the training helps boost relations between the U.S. and Turkey.