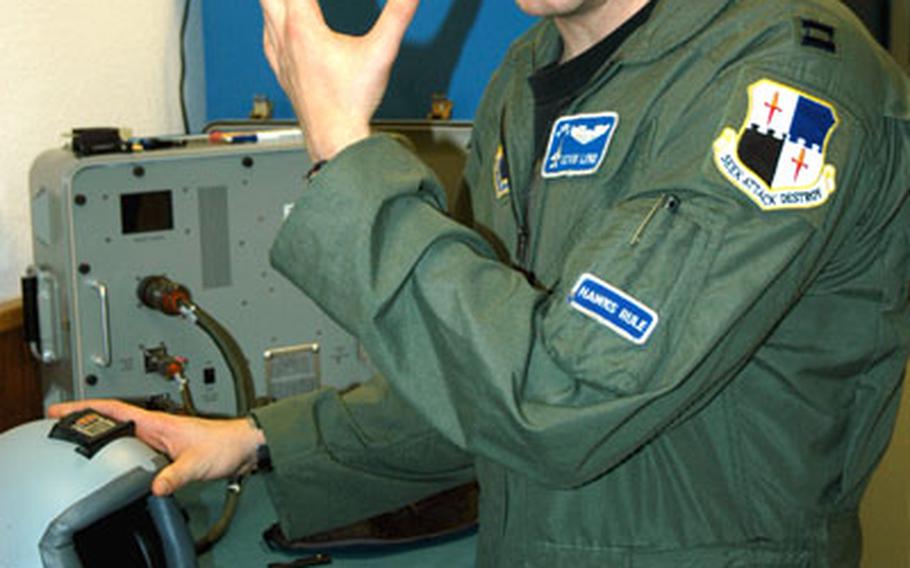 Capt. Kevin Lord, 23rd Fighter Squadron life support officer at Spangdahlem Air Base, Germany, talks about the unit’s new helmet system that allows a pilot to lock on a target with the glance of an eye. (Marni McEntee / S&S)

SPANGDAHLEM AIR BASE, Germany &#8212; Spangdahlem&#8217;s fighter pilots are finding out that looks really can kill.

The base&#8217;s two F-16CJ fighter squadrons are among the first F-16 units in the Air Force to get a new helmet system that allows them to simply glance at an enemy target and lock onto it before firing.

No more turning the entire jet before the targeting system can lock on to the bad guy.

The Helmet Mounted Cueing System, which costs nearly $100,000 per unit, display flight information on the inside of helmet visors, keeping the data in sight at all times. It also allows aiming or deploying sensors and air-to-air or air-to-ground weapons with little more effort than looking at a target and pressing a switch, according to a Web site on the helmet by its manufacturer, Boeing.

Lord said the new system is safer than the older system because it allows a pilot to keep his full attention outside the cockpit, rather than on internal displays just below eye level inside the plane. That could help avoid midair collisions in crowded airspace.

Air Force F-15 pilots and Navy F/A-18 pilots have been using the system for several years. Spangdahlem pilots received the new headgear several months ago and have been training with it since.

The Spangdahlem fighters haven&#8217;t used the new system in a war zone, but it&#8217;s only a matter of time until that happens, Lord said.