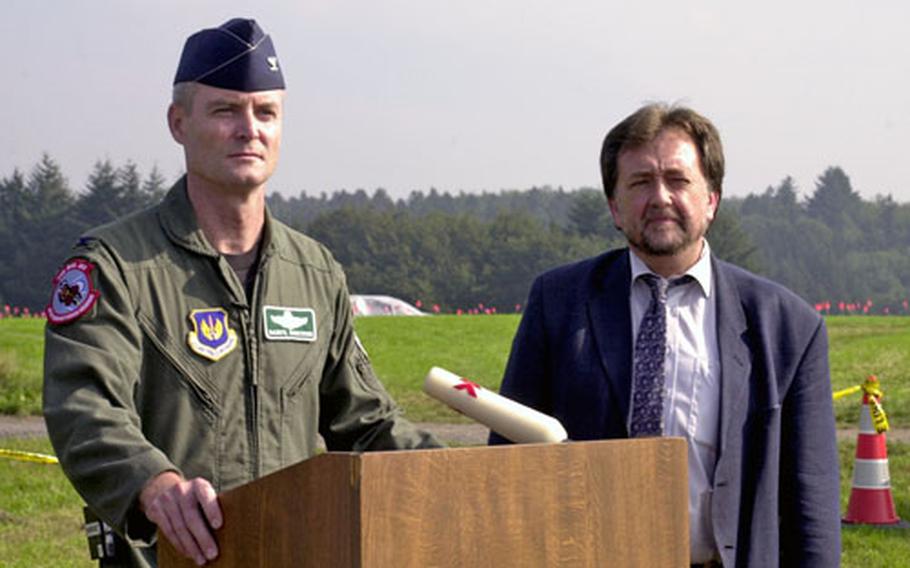 OBERKAIL, Germany &#8212; An F-16 fighter jet that an Air Force pilot safely ejected from before it crashed Thursday clipped an airfield antenna at Spangdahlem Air Base prior to experiencing a landing gear problem.

Col. Darryl Roberson, commander of the 52nd Fighter Wing, said Saturday that investigators will determine whether striking the antenna caused the plane&#8217;s landing gear problem, forcing the pilot to perform a &#8220;controlled bailout&#8221; a few miles from base.

The F-16, which is assigned to the wing&#8217;s 22nd Fighter Squadron, crashed into a cow pasture just outside this farming village. It happened at the end of a routine training mission. The pilot knew of the landing gear problem and tried to fix it before ejecting. He landed in a field about a mile from where the plane did.

The pilot, 1st Lt. Trevor Merrell, received minor injuries. He will not resume flying until the investigation is complete, Roberson said. The inquiry could take several weeks or longer.

Flight operations at the base have been suspended so safety issues can be reviewed &#8212; a normal procedure after a crash or mishap. Flying will resume Monday.

Air Force and German officials held a press conference at the crash site Saturday to answer questions and to allay any fears by local residents.

Michael Billen, a county commissioner in the area, said many residents are concerned about the environmental impact of the crash and whether there is any danger to the surrounding area.

There were no injuries reported on the ground, and Air Force environmental crews determined there is no indication of any hazardous exposure to local residents or permanent damage to the land. The jet was not armed.

F-16s carry a bottle of hydrazine, which is used to fuel an emergency power unit. Hydrazine is a volatile and toxic chemical compound but not harmful when exposed to the air. Crews safely recovered the plane&#8217;s hydrazine canister with no problems, Roberson said.

Investigative teams consisting of officers from American bases across Europe arrived on the scene Saturday. Crews marked every piece of debris they found the last two days, placing hundreds of fluorescent orange flags across the site.

Clear plastic sheets covered the plane&#8217;s rubble, which is a few hundred yards from a Catholic chapel overlooking the village.