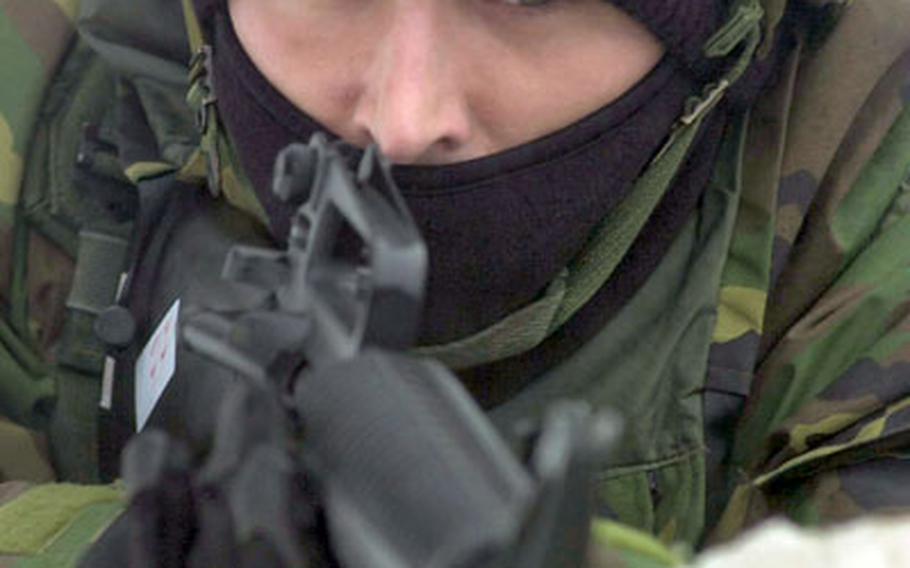 An airman protects the perimeter of a convoy during combat skills training. (Scott Schonauer / S&S)

An airman protects the perimeter of a convoy during combat skills training. (Scott Schonauer / S&S) 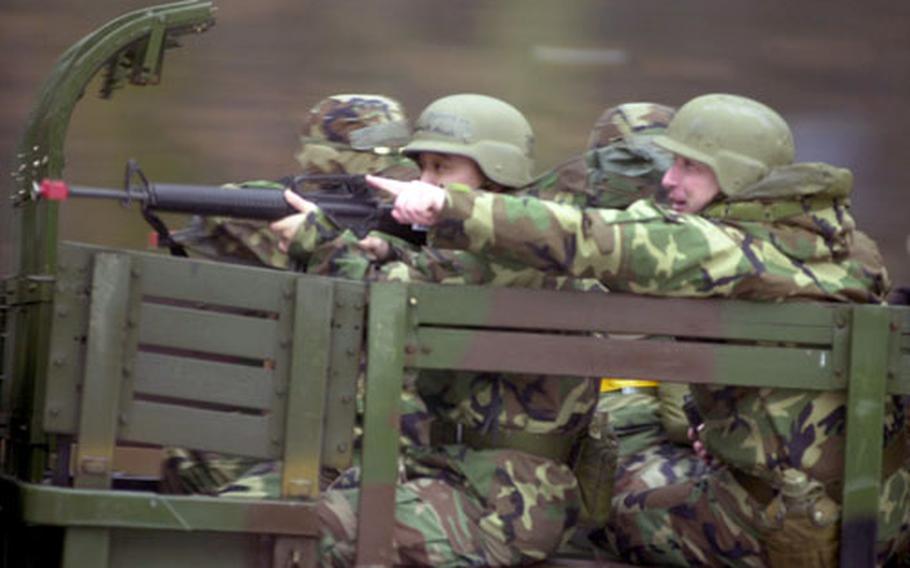 An airman points to an "insurgent" shooting from the woods during combat skills training at Spangdahlem. The airmen were taking part of the field portion of the training, which includes riding in a convoy and encountering insurgents. (Scott Schonauer / S&S) SPANGDAHLEM AIR BASE, Germany &#8212; The military trucks stopped and camouflaged troops armed with automatic rifles quickly fanned out to protect the convoy.

Some belly-flopped onto the snow, aiming at the tree line in search of any insurgents lurking in the woods.

At first glance, it might have looked like the troops were part of an Army unit preparing for a deployment to Iraq or Afghanistan.

But these men and women aren&#8217;t soldiers. They&#8217;re airmen, from computer technicians to aircraft mechanics.

With the Pentagon struggling to sustain ground troop levels in Afghanistan and Iraq, more airmen are being deployed to take on traditional combat roles filled by soldiers and Marines. That&#8217;s part of the reason why the Air Force is requiring bases to teach deploying members basic combat skills.

Tech. Sgt. James Geiss said the training is important to his survival in a combat zone.

Geiss is a member of the base&#8217;s logistics readiness squadron and among the 240 airmen who took the two-day expeditionary combat skills training at Spangdahlem last week.

Last year, the Air Force began requiring deploying members to take at least 19 hours of combat training. Since November, 2,300 airmen have gone through the training at Spangdahlem, which is home to about 5,000 active-duty servicemembers in western Germany.

Security forces personnel teach the course, which includes 12 hours of class work and seven hours of field training. Airmen are drilled on weapons familiarization, convoy protection and rifle fighting. They also learn what to do when confronted by hostile fire or roadside bombs.

The training isn&#8217;t easy for some, especially those more accustomed to working in an office on a computer. One airman separated his shoulder, and a few other airmen vomited during the field training.

Deploying airmen will have to be ready physically and mentally.

The war on terrorism has required the Air Force to do more than just fly planes and manage satellites.

Airmen from various specialties have deployed to Iraq to guard convoys and bases to help the Army, which has the bulk of the 130,000 U.S. servicemembers fighting the insurgency in Iraq.

The dangers airmen face in places such as Iraq and Afghanistan have also led to additional training. The Air Force wants all airmen regardless of their job title to be able to pick up a gun and defend the base, if needed.

While women are barred from serving in combat roles, male and female airmen go through the same combat training prior to a deployment.

The majority of the airmen deployed for convoy duty have come from logistics readiness squadrons, but other career fields are getting the call.

Master Sgt. Tim Schneck, who has deployed to Iraq, teaches a quick overview of convoy protection at Spangdahlem. He said airmen in desk jobs thinking they won&#8217;t be picked for combat duty in Iraq or Afghanistan could be in for a rude awakening.