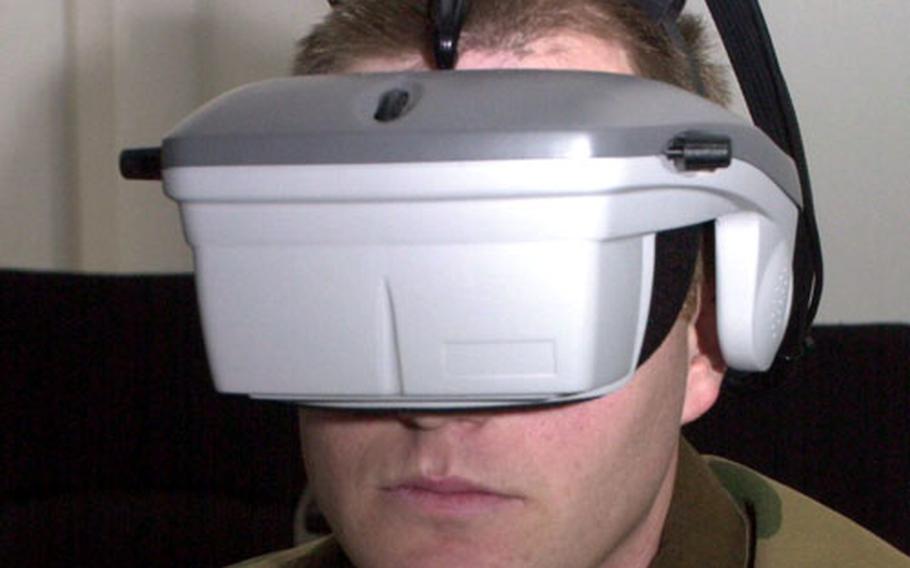 Chief Warrant Officer 2 Shawn Middleton trains on a simulator at the Joint Fires Center of Excellence at Spangdahlem Air Base in Germany. The center is the U.S. military’s only Europe-based firepower education center. (Scott Schonauer / S&S)

The mission calls for tremendous timing and flawless communication between troops on the ground and pilots in the sky. Even a small mistake can be fatal to friendly forces.

The Joint Fires Center of Excellence at Spangdahlem Air Base aims to train pilots and ground troops from all the services to avoid such breakdowns and improve the way the military conducts close air support. The center opened in October and is the only school of its kind in Europe, but instructors are already predicting growth.

Military operations in Iraq and Afghanistan have proved the importance of close air support as troops on the ground have had to rely on aircraft from all services and even coalition partners.

But the missions do not come without danger. During military operations in Afghanistan in 2001, errors made while conducting close air support led to &#8220;friendly fire&#8221; incidents. A General Accounting Office study in 2003 found that the military did not provide realistic and standardized training.

Ground and air forces had few opportunities to train together in a &#8220;joint environment&#8221; and often had to create ad hoc procedures on the battlefield, the report found.

The center at Spangdahlem, known by the acronym JFCoE, has eight Army and Air Force instructors and gives European-based pilots and ground forces a school right in their backyard. Before, Nellis Air Force Base in Nevada provided the only Air Force school that schooled airmen on close air support techniques and procedures.

Another benefit of the program, instructors say, is that the center brings in servicemembers from all the services in addition to NATO military personnel and coalition partners.

A typical class includes two weeks of academic and simulator work, followed by a week on a range where the trainees work with actual aircraft.

Last month, Apache pilots with the 6-6 Cav regiment based in Illesheim, Germany, were at the center learning how to direct close air support for their helicopters. They used a simulator that required wearing a headset and provided a video-game like test on how to direct aircraft to bomb targets.

Although the Army has performed the mission in emergency situations in Iraq, the military is experimenting with allowing the attack helicopters to take on more of the missions downrange.

So far, only F-16s and A-10s have participated in the training. But instructors hope U.S. and NATO aircraft from throughout Europe will train with students from the center on the range. Eventually, the center plans to bring Army forward observers so they will be better prepared for places such as Iraq and Afghanistan, where they have a good chance to use what they learn.