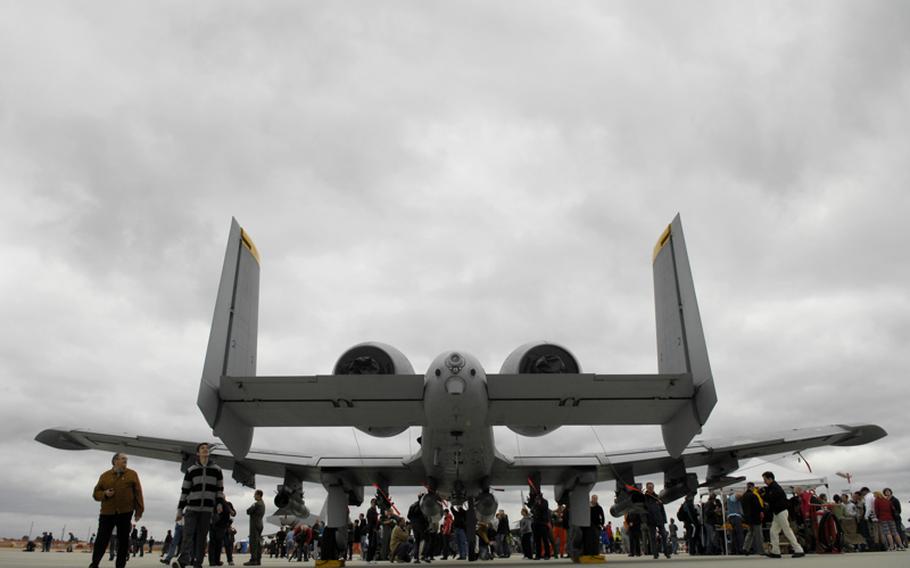 Buy Photo
Spectators get a close look at an A-10 Thunderbolt II, nicknamed the Warthog, during the 2011 open house and aerial demonstration at Spangdahlem Air Base, Germany. This year's edition of the event has been canceled due to budget constraints. (Joshua L. DeMotts/Stars and Stripes)

KAISERSLAUTERN, Germany — This spring’s open house at Spangdahlem Air Base, an event that drew about 40,000 visitors from around Europe when the base last opened its gates to the public two years ago, has been canceled due to Air Force budget constraints, officials said Monday.

The open house and aerial demonstration, tentatively on the calendar for May 11 and 12, was in its initial planning stages when the plug was pulled.

“Due to the current budget situation, the Air Force has cancelled flying participation in air shows, installation open houses, tradeshows, and flyovers, including the Thunderbirds and other demonstration teams,” base officials at Spandahlem said in a written statement.

The Air Force says it’s facing a $12.4 billion shortfall for the current fiscal year due to the across-the-board sequestration budget cuts that went into effect March 1. With plans under way to reduce flying hours by as much as 18 percent to cut costs, the Air Force says it needs to re-allocate flying hours that would have been used at air shows to combat readiness training.

Spangdahlem officials had planned to combine the open house with a commemoration of the base’s 60-year anniversary, said Iris Reiff, a base spokeswoman. Now that the open house is canceled, the base’s 52nd Fighter Wing “is making tentative plans to showcase the mission and capabilities on a smaller scale” and celebrate the anniversary on May 10, Reiff said. The base won’t open its gates to the public, but it’s expected that some members of the local community will be invited to the festivities.

The Air Force halt on air show participation could affect other military and civilian air shows in Europe.

“At this time, USAFE-AFAFRICA is not participating in air shows, installation open houses, tradeshows and flyovers,” Master Sgt. Norris Agnew, a spokesman for U.S. Air Forces in Europe-Air Forces Africa said in a written statement.

Participation by USAFE-AFAFRICA aircraft, however, at two popular international aircraft shows this spring is still under review, Agnew said. Those are the Royal International Air Tattoo in Britain and the Paris Air Show.