Spangdahlem airmen get ready to deploy 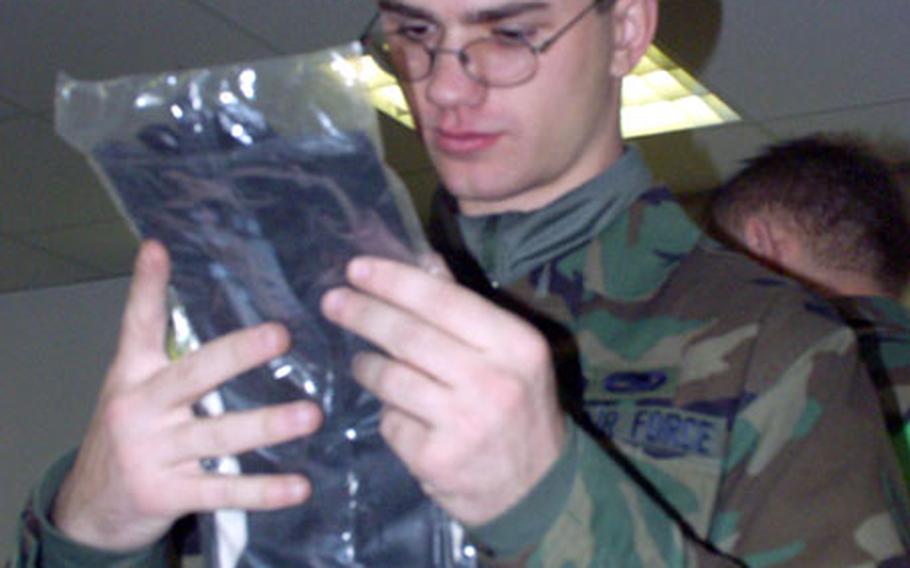 Airman 1st Class Matt Spruit, a 22nd Aircraft Maintenance Unit weapons technician scrutinizes the rubber gloves for his chemical warfare suit carefully. Any holes or leaks in the gear could prove deadly for the troops, warned chemical warfare specialists on Friday. The team of airmen from Spangdahlem Air Base, Germany, took a full range of protection against chemical and biological warfare attacks for their deployment to the U.S. Central Command area of operations. (Sean E. Cobb / S&S)

Airman 1st Class Matt Spruit, a 22nd Aircraft Maintenance Unit weapons technician scrutinizes the rubber gloves for his chemical warfare suit carefully. Any holes or leaks in the gear could prove deadly for the troops, warned chemical warfare specialists on Friday. The team of airmen from Spangdahlem Air Base, Germany, took a full range of protection against chemical and biological warfare attacks for their deployment to the U.S. Central Command area of operations. (Sean E. Cobb / S&S) 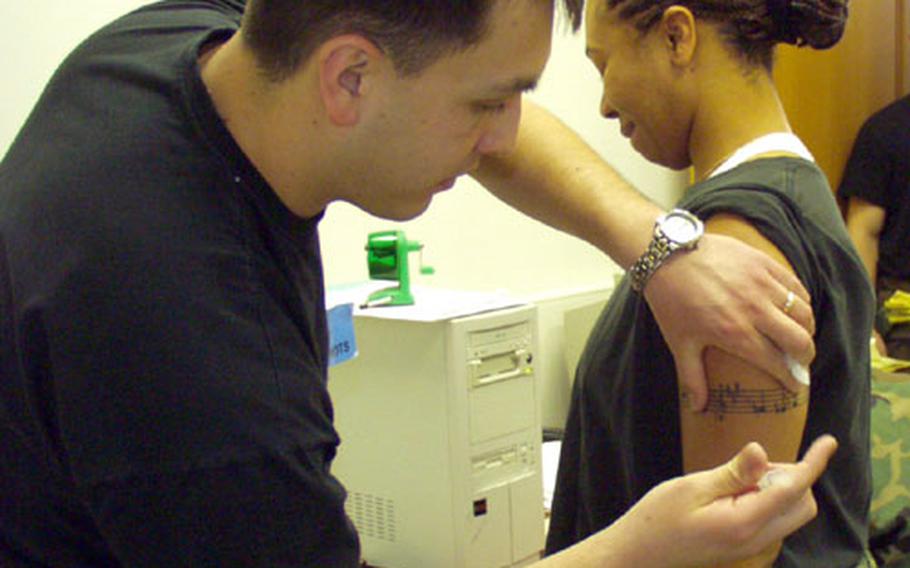 Staff Sgt. Lynnde Boykin, a 52nd Aircraft Maintenance Squadron F-16 engine mechanic receives a booster Anthrax shot from Staff Sgt. Leonel Gonzalez, a 52nd Medical Group first responder. Most of the airmen deploying from Spangdahlem Air Base, Germany, over the next few days already had the first of a series of Anthrax shots and were due for the booster, immunization officials said Friday. (Sean E. Cobb / S&S) 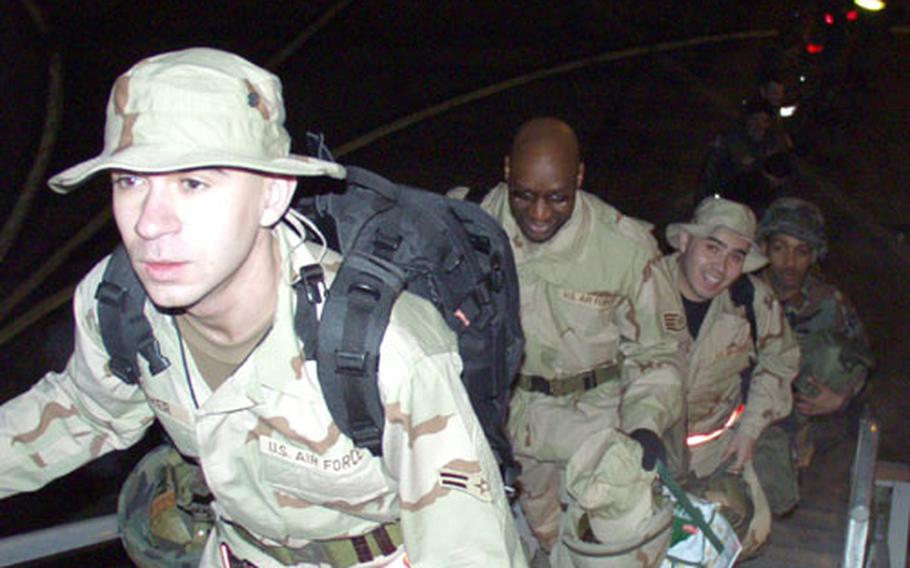 Airmen from the 52nd Fighter Wing out of Spangdahlem Air Base, Germany, load onto a commercial contract DC-10 early Sunday morning en route for the Persian Gulf region. The airmen left for the gulf to support the ongoing Enduring Freedom operation and position themselves for possible future action in the region if called upon by national leaders, wing officials said. (Sean E. Cobb / S&S) 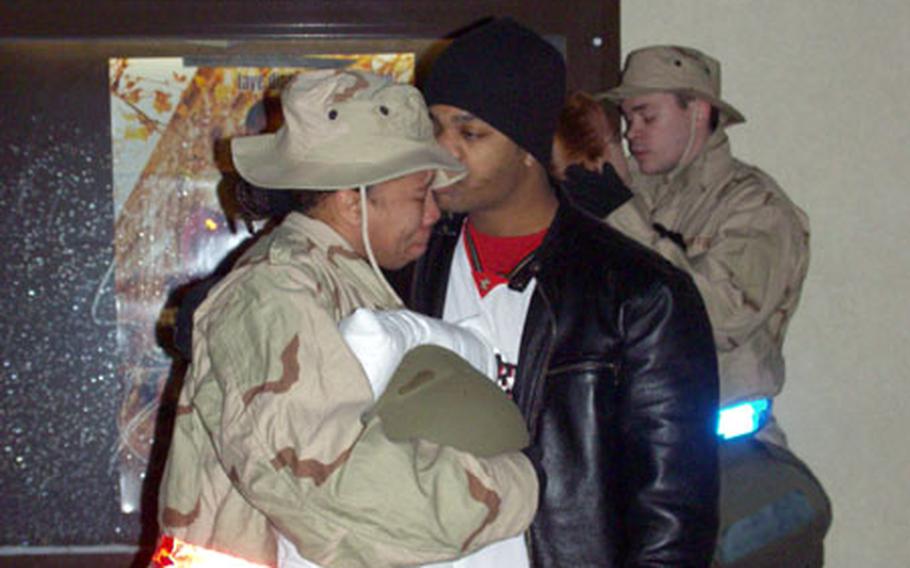 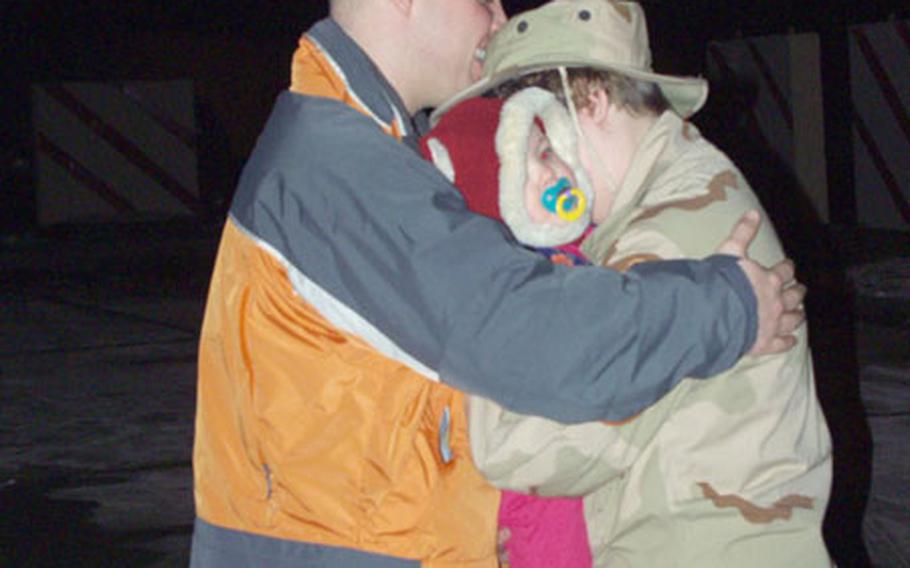 The first large force of European-based airmen and planes will leave over the next few days en route to an undisclosed location somewhere in the Central region.

More than 500 Spangdahlem airmen and about half the F-16CJ aircraft from one of the base&#8217;s three fighter squadrons are leaving, said Maj. Melinda Morgan, a 52nd Fighter Wing spokeswoman. The wing maintains its headquarters at Spangdahlem, located in Southwest Germany.

The actual number of airmen and aircraft deploying is classified, Morgan said.

Air Force officials are also not revealing the deploying unit&#8217;s destination, to protect the airmen as they move and settle in to their new duties, Morgan said.

For Airman 1st Class Nicholas Johnson, uncertainty over where he goes makes no difference to how the mission&#8217;s accomplished.

Spangdahlem officials do know the nature of the unit&#8217;s mission.

The unit will fly in to support Operation Enduring Freedom in the Central region, and the plan is to position and be prepared for possible future action in the region when ordered by national leaders, officials said.

Normal Air Force deployments call for airmen to leave for 90 days. However, this deployment appears open-ended.

The aircraft are also armed with two global positioning system-guided missiles and have a 500-round 20 mm multibarrel cannon.

On Friday, the airmen spent part of their day processing for their deployment.

Since this is a short-notice deployment so quickly after the holidays, base officials sought to give the airmen more time with their families and less time in a processing line, said Capt. Claudia Bermudez, the wing&#8217;s installation deployment officer.

The base pre-processed airmen days before the planes were to depart, then released the airmen to go home instead of keeping them for longer periods of time immediately preceding their departure, Bermudez said.

The deployment processing team also shaved the time airmen spent in an out-processing line from almost four hours to a little over two hours, Bermudez said.

Airmen staying behind at the base did their part to make it easier for the deploying airmen, Bermudez said.

Instead of the deploying airmen carrying numerous heavy bags around as they processed, teams literally took the bags off their hands and carried the bags to waiting C-5 cargo aircraft.

Are we there yet?

The airmen received several briefings Friday on customs, security and health issues for the Central region. After briefings, it was time to hit the processing line.

Medical immunization troops pulled many of the deploying airmen aside to receive an anthrax booster shot. At times, airmen crowded the shots room, joking with each other about how painful the shot felt.

Other airmen in the room were not fooled.

&#8220;I made sure my will and powers-of-attorney were updated, and my wife and I talked to the chaplain,&#8221; Williams said.

Williams cautioned his family of the dangers that servicemembers face while doing their part to keep the country free, he said.

Williams has been spending as much time as he can with his wife, Marrika, and three daughters, Chandler, 7, Chainie, 4, and Ciera, 6 months, before leaving, he said.

For airmen staying behind at the base, it is hard to watch friends leave, said Airman 1st Class Jennifer Heath, a support squadron personnel specialist, as she checked weapons qualifications in the deployment processing line.

Ernesto Bolanos has not deployed for almost two years, so they knew his time would come soon, she explained.

The couple has a daughter, Elaina, 14 months, and child care is more challenging when a spouse is away, she said.

&#8220;Alarm clock, shaver, flashlights. I also told him to check for scorpions in his boots and camel spiders in his bed.&#8221;

Michele stayed busy with her family and helping other deploying airmen in her shop.