Spangdahlem airmen deployingto 21 locations for up to six months Spangdahlem airmen go through the base&#39;s deployment center, talking to finance, medical, and legal specialists, as well as unit chaplains. About 1,000 of the air base&#39;s 5,500 airmen are deploying to 21 locations worldwide in the coming weeks. (Marni McEntee / S&S)

Spangdahlem airmen go through the base&#39;s deployment center, talking to finance, medical, and legal specialists, as well as unit chaplains. About 1,000 of the air base&#39;s 5,500 airmen are deploying to 21 locations worldwide in the coming weeks. (Marni McEntee / S&S) 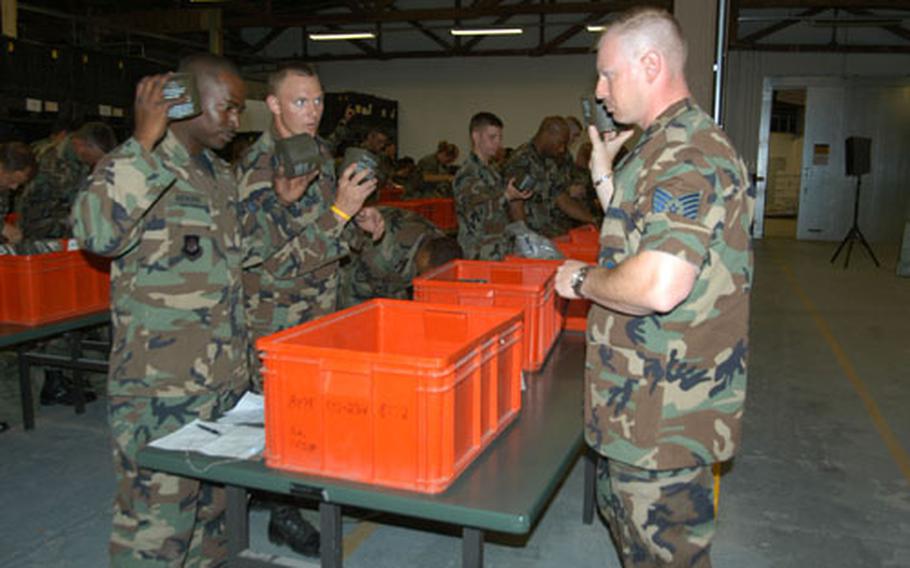 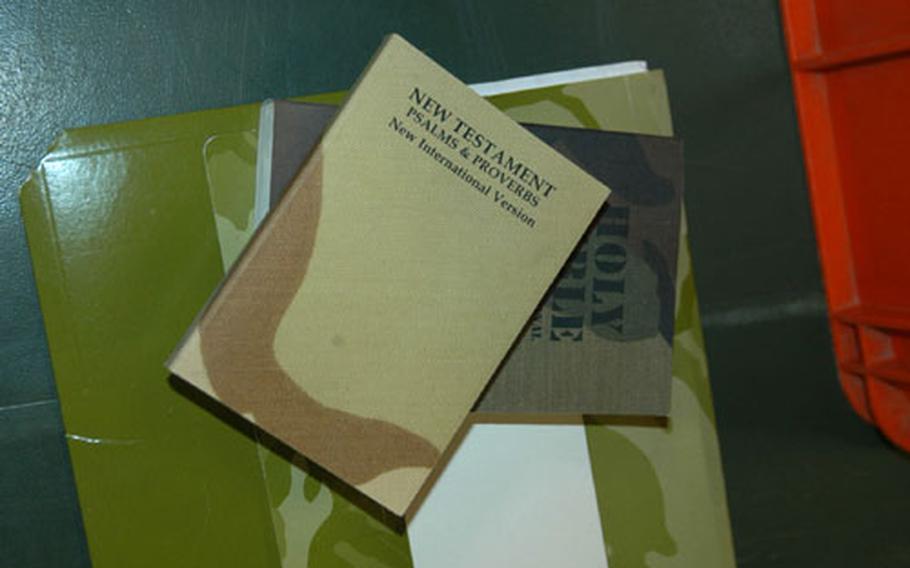 Airmen can take along the Holy Bible and New Testament psalms and proverbs when they deploy. About 1,000 of Spangdahlem Air Base&#39;s 5,500 airmen are deploying to 21 locations worldwide in the coming weeks. (Marni McEntee / S&S)

SPANGDAHLEM AIR BASE, Germany &#8212; Hundreds of Spangdahlem airmen were preparing this week to deploy for up to six months, including highly demanded security forces members.

In all, some 1,000 Spangdahlem airmen &#8212; nearly one-fifth of the base&#8217;s active-duty population &#8212; will go to 21 locations worldwide as part of the next Aerospace Expeditionary Force rotation.

Many will be going to the Middle East and other areas in the U.S. Central Command Area of Operations, but a few have garnered stateside postings. Public affairs officials would not release the exact destinations.

On Thursday, 200 airmen were getting vaccinated, collecting gear and getting their legal paperwork in order in a two-hour, well-organized deployment processing system.

They were briefed on medical issues, intelligence and cultural norms for their regions, and received information on family support systems that will take care of loved ones while they are gone.

Among them was Staff Sgt. Anthony Erskine, a 52nd Security Forces Squadron flight chief who will join 60 other security forces airmen leaving next week.

Erskine&#8217;s orders put him downrange for up to six months &#8212; two months longer than the current AEF rotation length. That&#8217;s the way of the world for airmen whose specialties &#8212; including communications, pararescue and aircraft maintainers &#8212; are in great need and short supply.

&#8220;Everybody here is motivated to go downrange and do for their country,&#8221; Erskine said. His last deployment 18 months ago was to the Middle East as well.

Others, like Master Sgt. Lisa Friend, superintendent of the 52 Fighter Wing&#8217;s administration office, are more experienced. But Friend, of Knoxville, Ill., is a single mom leaving two kids at Spangdahlem. Her mother is coming out to stay with them.

The deployment process looks like a well-oiled machine, but getting it that way took two weeks of planning, said Capt. Reggie Trujillo, 52nd Fighter Wing Installation Deployment Officer. Trujillo added four airmen to his eight-person staff to get the job done.

Each deploying airmen gets at least two bags of gear that, depending on whether they need a mix of cold- and hot-weather wear, can weigh up to 200 pounds, Trujillo said. His crew has to inventory it all before it goes out and again when it comes back in.

Airman Rosemary Wilkes, one of the few women deploying with the security forces squadron, was learning the process for the first time. She has barely been in the Air Force a year.

As a young troop, Wilkes said she has relied on her more experienced squadron members for help and advice. They haven&#8217;t let her down.