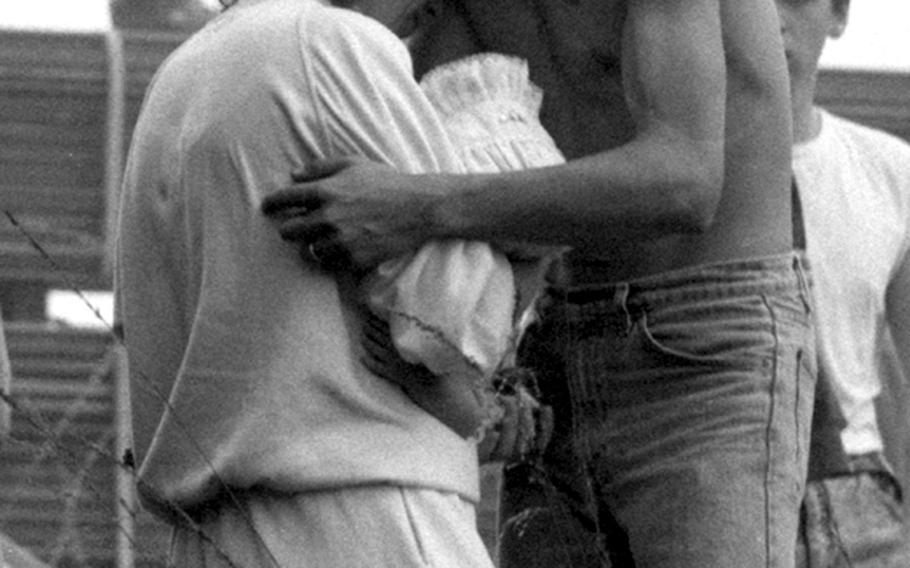 A woman is comforted after witnessing the crash at the Ramstein Air Show on Aug. 28, 1988. (Dave Didio/Stars and Stripes file photo)

A woman is comforted after witnessing the crash at the Ramstein Air Show on Aug. 28, 1988. (Dave Didio/Stars and Stripes file photo) A woman reacts to an accident that killed 70 people including pilots and injured 450 during the final maneuver of the Italian aerial demonstration team at the Ramstein Air Show on Aug. 28, 1988. (Dave Didio/Stars and Stripes file photo) 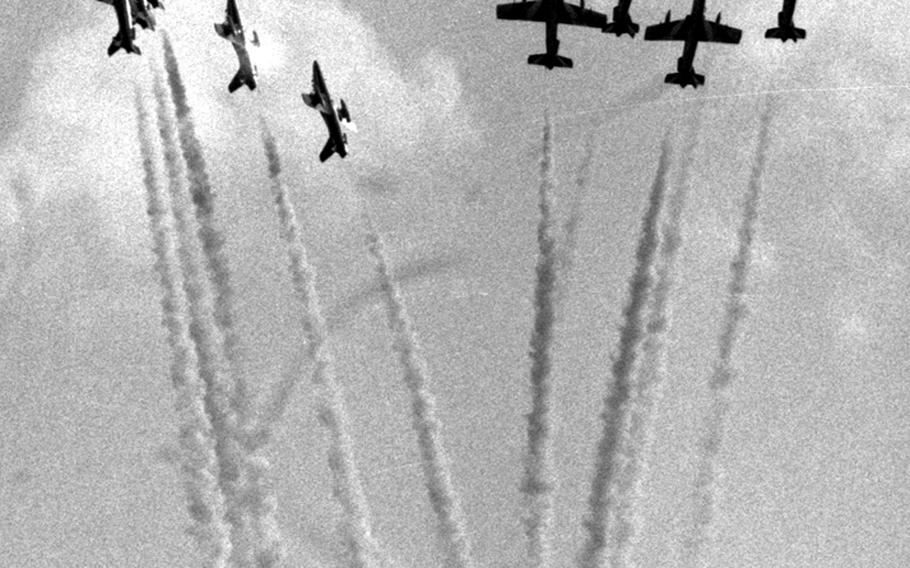 Italian Aermacchi MB-339 fighter jets perform an aerial maneuver moments before three collided in midair at Ramstein Air Base in Germany, killing 70 people and injuring 450 on Aug. 28, 1988. The jets were part of the precision-flying team Frecce Tricolori, and the crash happened during the show's final maneuver, called the "Pierced Heart." (Dave Didio/Stars and Stripes file photo) 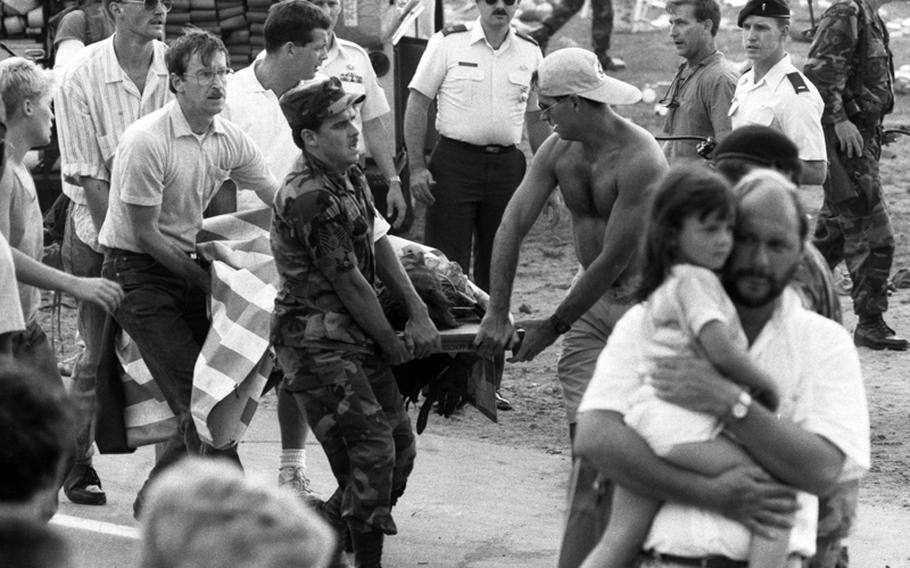 A victim of the Aug. 28, 1988, Ramstein air show accident is transported for medical attention. () A man injured in the collision of three Italian jets during an aerial maneuver at the Ramstein Air Show on Aug. 28, 1988, is checked out by a U.S. military member after the Ramstein air show accident. (Dave Didio/Stars and Stripes file photo) 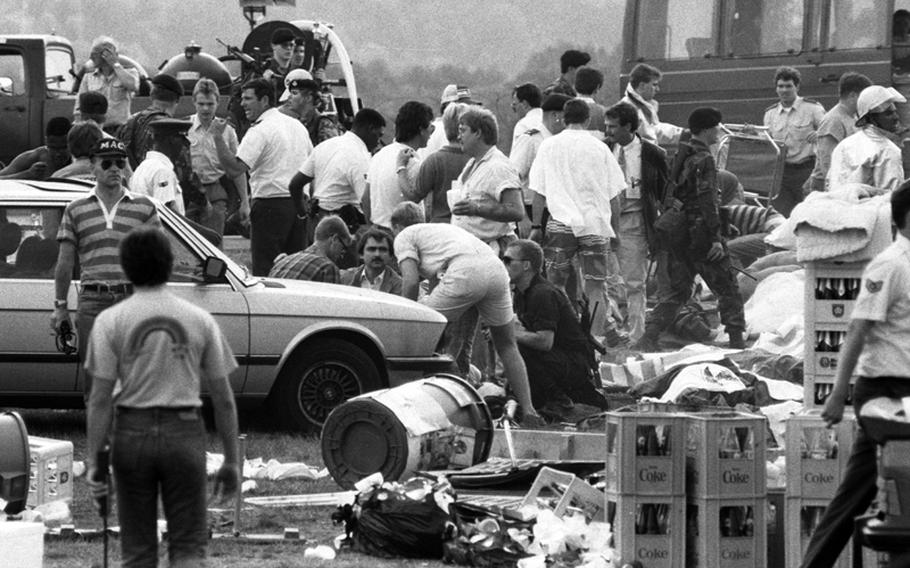 On Aug. 28, 1988, three Italian Air Force jets from the precision-flying team Frecce Tricolori collided in midair during the final performance of an air show sending one of the jets into the crowd of nearly 300,000 spectators at Ramstein Air Base. A total of 450 people were injured, and 70 people died, including 60 Germans, four Americans and three Italian pilots. (Dave Didio/Stars and Stripes file photo) 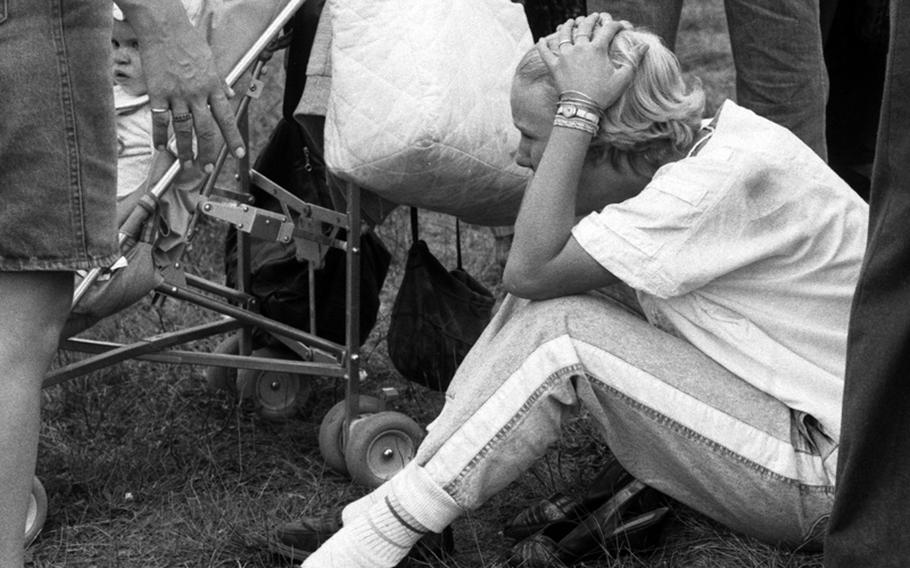 Emotions ran high after three Italian Air Force jets from the precision-flying team Frecce Tricolori collided in midair during the final performance of an air show sending one of the jets into the crowd of nearly 300,000 spectators at Ramstein Air Base on Aug. 28, 1988. (Dave Didio/Stars and Stripes file photo) 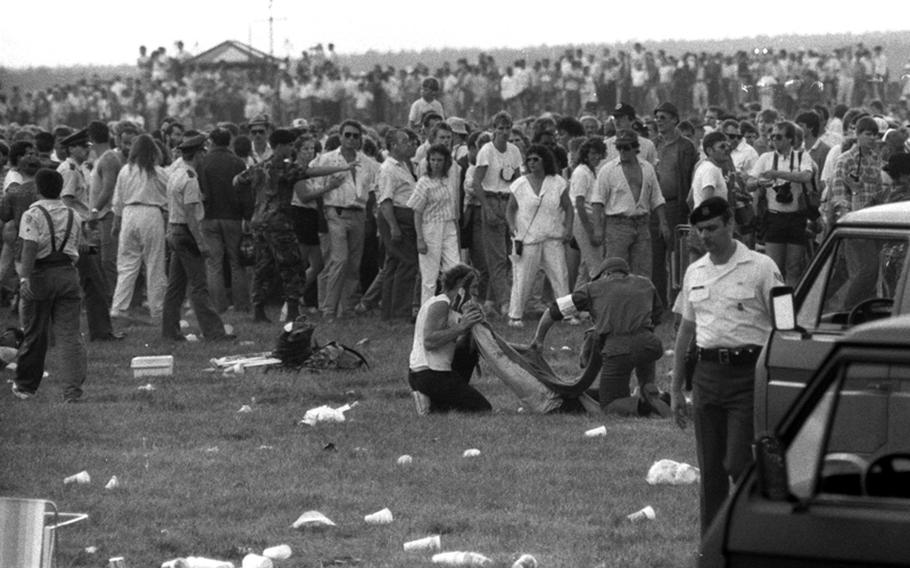 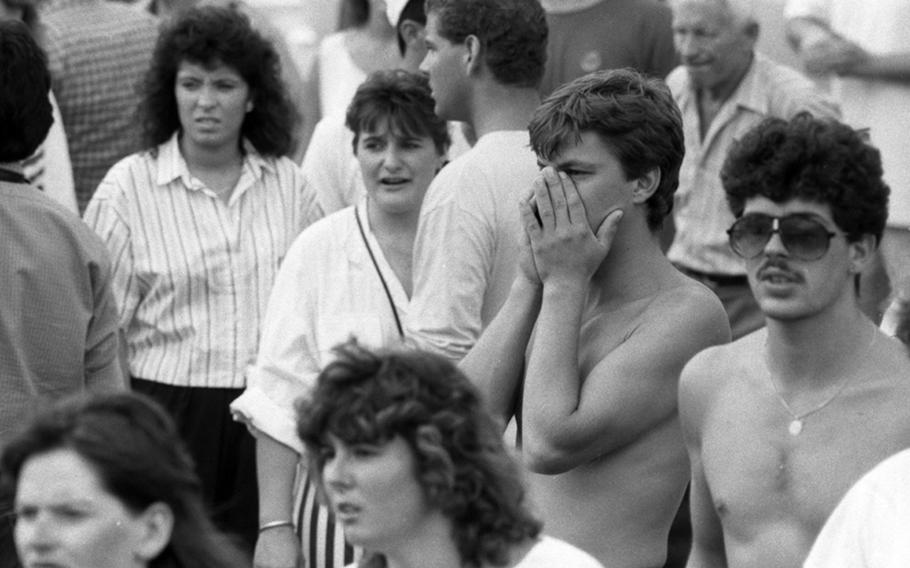 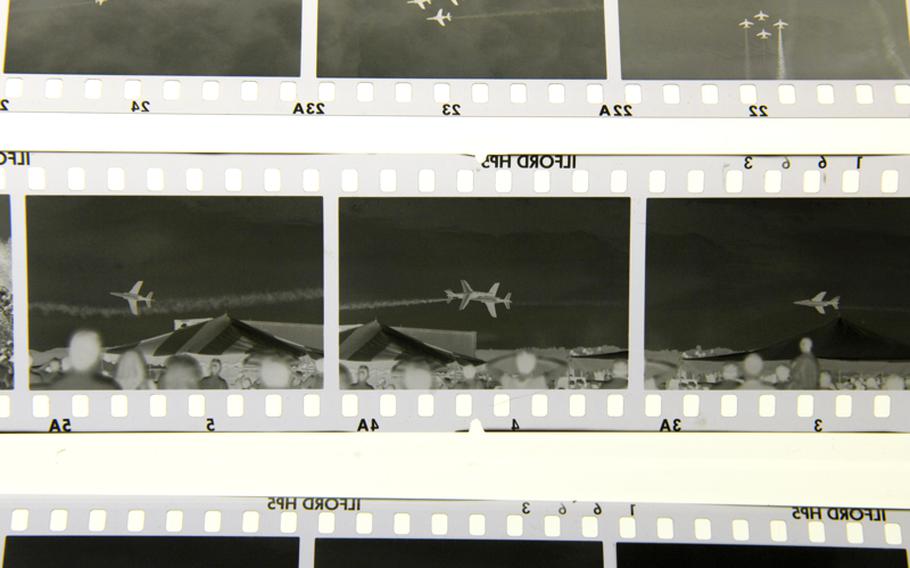 Negatives of photographs taken Aug. 28, 1988, during an air show at Ramstein Air Base, show how close the aircraft flew to the crowd of nearly 300,000 spectators. (Stars and Stripes) This public memorial dedicated to the victims of the 1988 air show catastrophe is located down the street from the west gate of Ramstein Air Base. (Joshua L. DeMotts/Stars and Stripes) 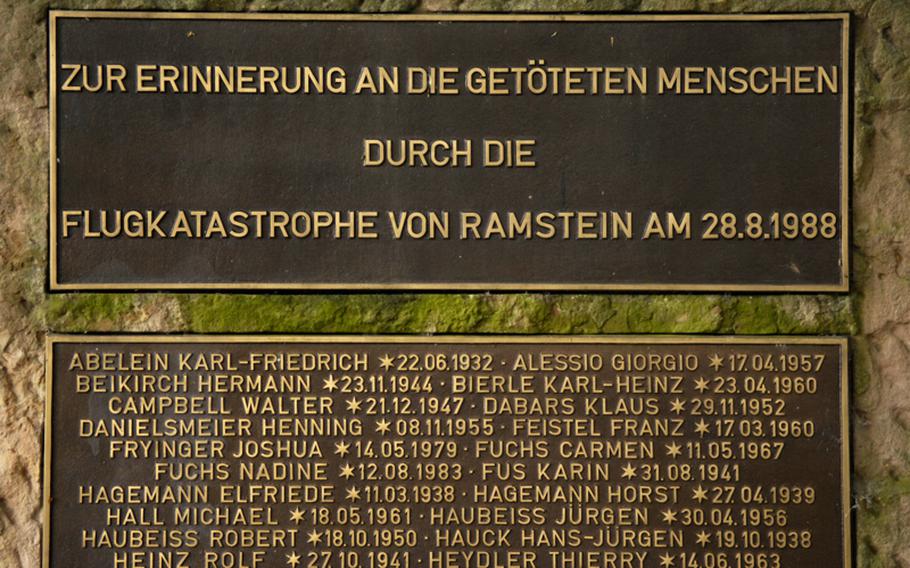 A detail of the public memorial dedicated to the victims of the 1988 air show catastrophe says, "In remembrance to the people who were killed in the Ramstein air show disaster on Aug. 28, 1988." (Joshua L. DeMotts/Stars and Stripes) 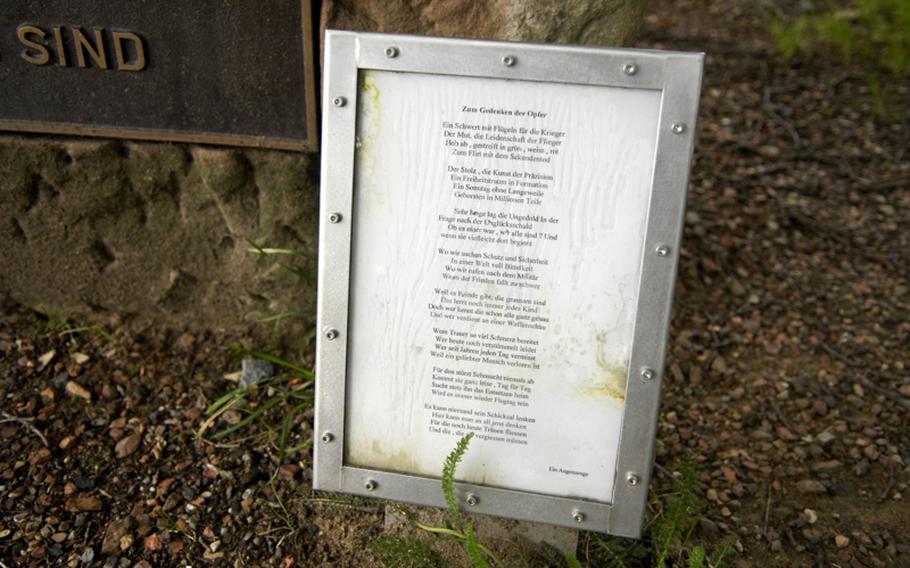 A poem at the side of a memorial to the victims of the 1988 Ramstein air show disaster titled, "In Memory of the Victims" and signed, "A Witness," concludes with the line: " Here, one can think of all those for whom even today tears flow, and for those who must shed them." (Joshua L. DeMotts/Stars and Stripes) Roland Fuchs, pictured here before the 1988 Ramstein air show. Fuchs lost his wife and 5-year-old daughter, and more than 65 percent of his body was burned. (Roland Fuchs/Courtesy to Stars and Stripes) 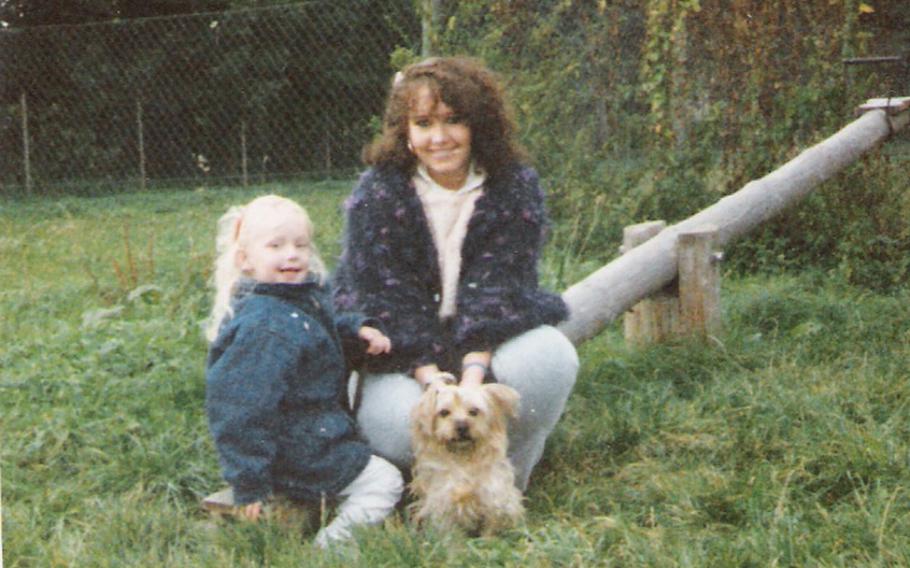 Five-year-old Carmen and Nadine Fuchs, were among 70 spectators killed at the 1988 Ramstein Air Show. (Roland Fuchs/Courtesy to Stars and Stripes) 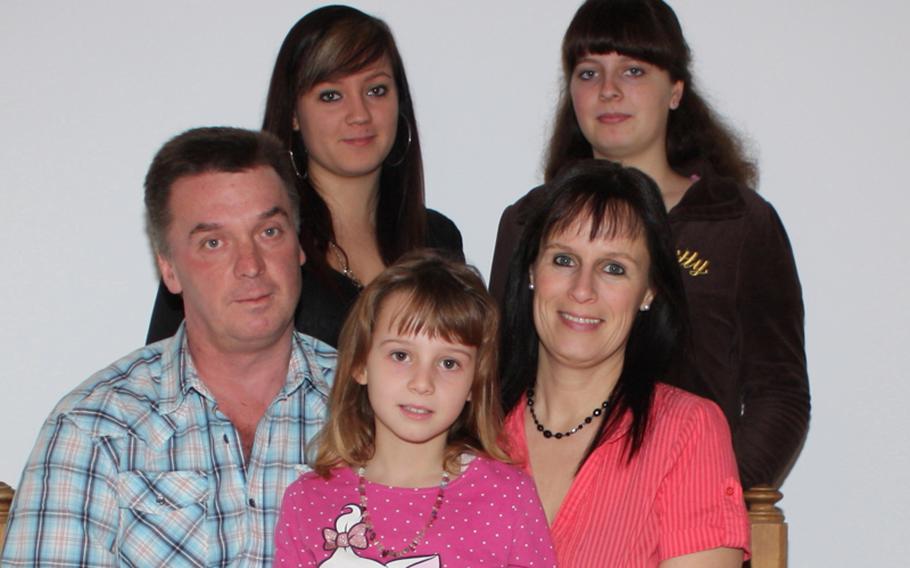 Roland Fuchs with his family today: Wife Elisabeth and daughters, left to right, Sabrina, 17, Daniela, 8, and Corinna, 14. (Roland Fuchs/Courtesy to Stars and Stripes) Deborah Hull and Myron Riggs lost their spouses in the deadly Ramstein air show disaster on Aug. 28, 1988. The couple found each other and started a new life together while recovering from their experiences. (Myron Riggs/Courtesy to Stars and Stripes) 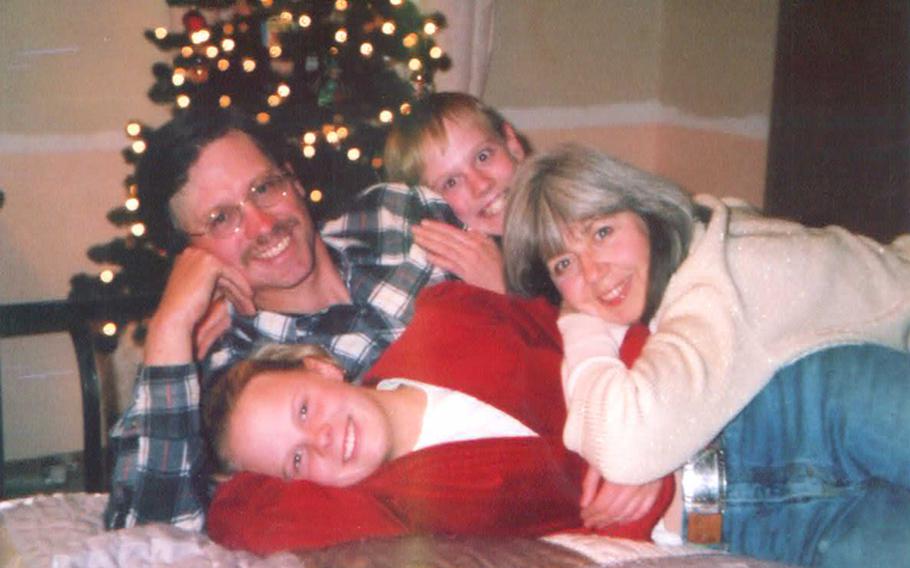 Deborah and Myron Riggs pose for a photo with their adopted children Stephen and Sarah. Myron Riggs/Courtesy to Stars and Stripes ()

KAISERSLAUTERN, Germany — When an F-16 fighter jet and other military planes take their turns in the sky over Spangdahlem Air Base this weekend as part of an open house, Roland Fuchs, a survivor of the 1988 Ramstein air disaster, won’t be among the bystanders.

The aerial demonstration — with maneuvers more complex than a flyby — is the first to be performed before the public on a U.S. military base in Germany since a 1988 air show crash at Ramstein Air Base, where 67 spectators were killed and more than 500 others injured, U.S. Air Forces in Europe officials said.

That disaster, in which three Italian pilots also were killed in a midair collision that sent one of the planes careening into the crowd, had far-reaching repercussions in Germany and is still vividly remembered by survivors.

Since that disaster, military air shows of the type held at Ramstein have been banned in Germany. Highly restricted air demonstrations are approved for open houses only after review of detailed plans, and German rules and restrictions must be adhered to.

Therefore, the flying portion of the Spangdahlem open house will be on a much, much smaller scale than the Ramstein shows, once a huge draw on the European flying circuit with aerobatic teams from all over Europe.

Only three aircraft are set to fly at Spangdahlem, each individually. There will be no team maneuvers. The planes’ flight maneuvers have been carefully scripted, and German restrictions prohibit flying over the crowd or lower than 500 feet.

“We carefully selected things that we knew were safe maneuvers and have been practiced over and over again,” said Lt. Col. Steve Horton, 52nd Operations Support Squadron commander at Spangdahlem.

But the news of any flying display at a U.S. military base here doesn’t sit well with some of the survivors of the 1988 disaster, who still bear deep emotional and physical scars from that hot August day.

Fuchs, a 46-year-old German, lost his wife and five-year-old daughter at the air show and suffered burns over most of his body, forcing him to give up his vocation as a carpenter because of scarring to his hands and fingers.

He can’t understand why the Americans would invite the public onto one of their bases again, even for a small aerial demonstration.

“I certainly do not want to criticize the people who go there and want to see the show,” Fuchs said, “but after what I had to go through, I … could never go to such an event again.”

“You’re not even close to what the (Ramstein) air show was,” said Wolfgang Hofmann, chief of USAFE civic outreach division. “It drew half a million people. It was flying, flying, flying. It was one of the major air shows in Europe.”

“I’m pretty sure this will not happen (here) for a long time.”

On his blog, Fuchs recalls the “festival atmosphere of American ice cream, hamburgers, French fries and the main attraction of the airplanes” on Aug. 28, 1988. As the Italian Frecce Tricolori began the last flight demonstration of the day, he remembers walking hand-in-hand with Carmen, his wife, and Nadine, his daughter, toward their car.

Then, “an incredible bang,” as he describes on his blog. He recalls fire and parts of wreckage and the spray of jet fuel hitting his body, and trying to put out the flames on his daughter’s dress with his bare hands.

Fuchs is part of a survivor’s group, formed shortly after the disaster and informally led by German couple Hartmut Jatzko, a psychiatrist, and his wife Sybille, a therapist.

Each year on the anniversary of the crash, survivors gather at a memorial near the west gate of Ramstein Air Base, which bears the names of all those who died: 60 Germans, four Americans, and one person each from Britain, Denmark and France, as well as the three Italian pilots.

“We then go inside the base and go direct to the point where the airplane came down and where their children stood and they died,” Sybille Jatzko said.

“All the people have a broken life story all at the same moment,” she said.

Myron Riggs also felt broken after he lost his wife, Genevieve, and 9-year-old stepson, Joshua, at the air show. A 24-year-old Army sergeant at the time, Riggs remembers the jets hitting and seeing the one “coming towards me,” he said by telephone from his home in Whitney, Nebraska. “The next thing I remember, I was on fire. It was just total chaos then.”

Riggs pieced his life back together. He remarried, a union born from tragedy. His wife, Deb, lost her first spouse, Air Force Master Sgt. Stephen Hull, who suffered a head injury at the air show and never awoke from a coma.

Because of his burns, Myron must still cover from head to foot, with long sleeve shirts, hat and gloves, when working outdoors, even in the withering heat of Nebraska summers.

He and Deb have been to air shows in the States.

“I loved air shows and I still do,” Myron said. “There are some things you just have to get over and get on with.” Of the aerial demonstration at Spangdahlem, he said, “I’m surprised they haven’t had one before this.”

Germany disbanded its F-4 aerobatic team after the 1988 disaster and remains without one to this day, Hofmann said.

“That was a result of the accident,” he said.

But in the ensuing years, aircraft have demonstrated their mettle for spectators at German military air fields, though not on the scale of a full-blown air show, U.S. military and German officials say. Such displays might include passes, demonstration flights and low-level refueling, Hofmann said. “You can show the capabilities of military aircraft but not fancy stuff,” he said.

“When Germans said OK, you can do some stuff … we were invited to do the same at our open houses, but we never did,” Hofmann said.

At Spangdahlem’s last open house in 2008, an F-16 and A-10 assigned to Spangdahlem’s 52nd Fighter Wing did “fly-bys” but no aerial maneuvers like those planned for this weekend, according to Spangdahlem officials. Approved maneuvers include a Cuban 8, Double Immelman, Aileron Roll, and High-G turns.

This time, the base invited an F-16 from Air Combat Command’s West Coast “Viper West” team at Hill Air Force Base, Utah; an OV-10B Bronco from Belgium; and an L-39, a former German military aircraft, to perform.

Coordination was worked through many channels, including USAFE headquarters, U.S. Air Combat Command and the U.S. Embassy in Berlin, according to USAFE officials. Approval was granted by the German Air Staff, said USAFE spokesman Mike Kucharek.

“We recognize the sensitivities of the survivors,” Kucharek said. “This is a far different type of event than an air show, because we’re essentially going to be flying basic aircraft maneuvers.”

“We’re fortunate to be able to show in better detail what we do as an Air Force,” Horton said.

Sybille Jatzko is opposed to any kind of air demonstration on U.S. military bases in Germany.

It gives survivors the feeling that the U.S. and German governments have forgotten what they went through, Sybille said.

“It’s the beginning again,” she said.

Marcus Kloeckner contributed to this story.svanj@estripes.osd.mil