Spangdahlem Air Base volunteers help winemakers with their harvest 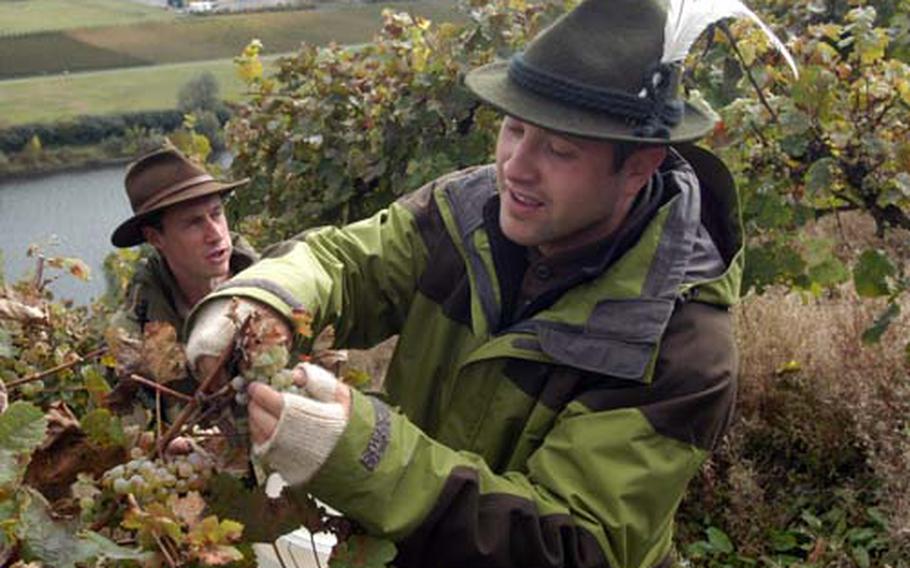 Staff Sgt. Valentino “Vito” Cipolla cuts the first grapes of the day at his vineyard in Piesport, Germany. In the background is one of his few employees, retired Air Force Maj. Mark Schmidt. (Seth Robbins / S&S)

Staff Sgt. Valentino “Vito” Cipolla cuts the first grapes of the day at his vineyard in Piesport, Germany. In the background is one of his few employees, retired Air Force Maj. Mark Schmidt. (Seth Robbins / S&S) 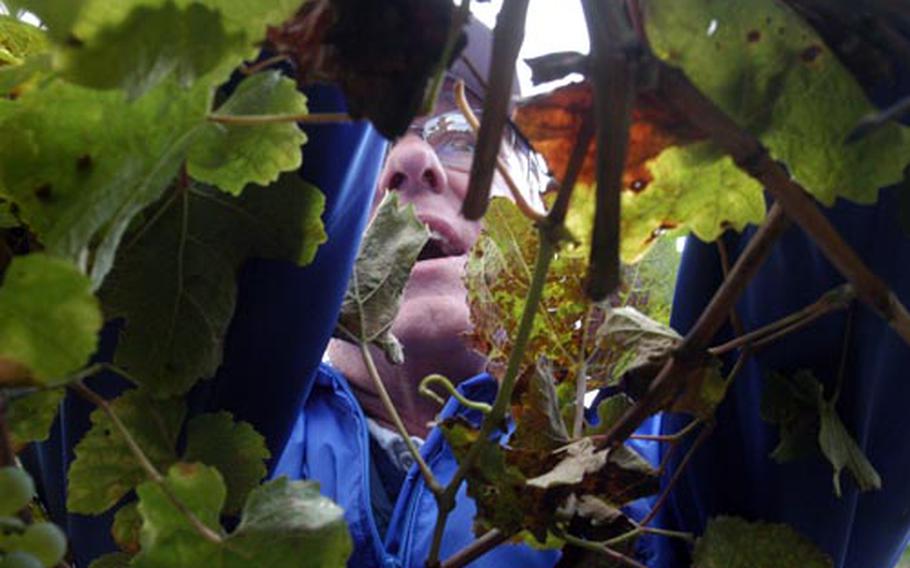 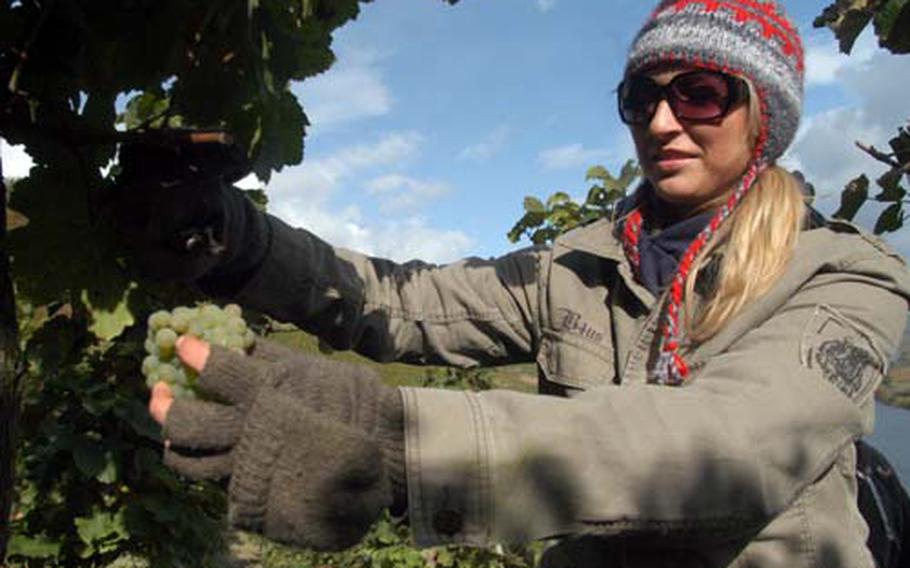 Staff Sgt. Martha Johnson, of the 52nd Logistics Readiness Squadron at Spangdahlem Air Base, plucks a grape bunch from the vine. She was among about 40 people who volunteered to pick grapes. (Seth Robbins / S&S) 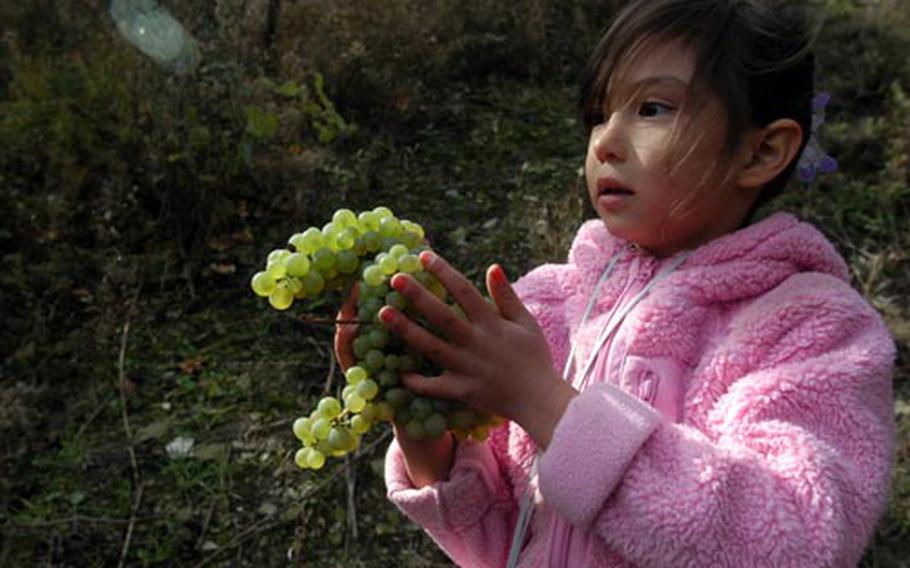 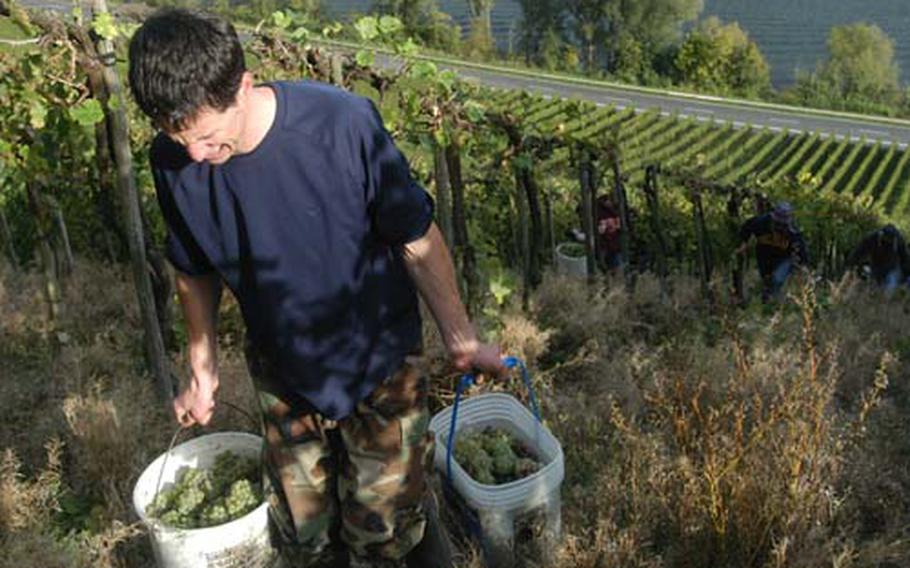 Retired Air Force Major Mark Schmidt hauls two buckets of grapes up the pitched slopes. He is one of the few employees at Cipolla&#39;s vineyards. (Seth Robbins / S&S)

PIESPORT, Germany &#8212; Hildegard Sailler&#8217;s family has tended vines on the slopes of the Mosel River since 1766. These days, stainless steel casks and a mechanical press make winemaking a little easier for Sailler and her husband, Staff Sgt. Valentino "Vito" Cipolla.

But one tradition remains unchanged since her great-great grandfather walked the vineyard paths: The finest grapes must be picked by hand.

On a damp and cold Friday morning, volunteers from Spangdahlem Air Base, where Cipolla works in the medical support squadron, stumbled down the pitched slopes with shears and buckets in hand. They cut off soft, pea-sized Riesling grapes by the bunch, dropped them into buckets and hauled the fruit up the 1,600-foot hill.

"I didn&#8217;t know picking grapes was going to be so hard," said Meisha, 6, as she handed a bunch to her mother, Tech. Sgt. Jane Camacho, of the dental squadron.

The adult volunteers were no less exhausted after five hours&#8217; work. These hillside vineyards were first planted by the Romans, who chose them for their excellent drainage and copious sunlight. But the Romans likely compelled a few of their pickers.

"There was definitely a point where it turned from fun to not so fun," said Schawann McGee, who works at a Spangdahlem church.

Feeling spent after seven rows of vines were plucked clean, the volunteers went home that evening with a few bottles of wine and the experience of standing on slopes that most Americans see only on gourmet magazine covers.

The work of making wine never really ends for Sailler and Cipolla, a Michigan native who bought a neighboring Piesport vineyard in 2006 and now works Sailler&#8217;s family holdings, too. Cipolla&#8217;s parents often drank Mosel wines with dinner, he said, and while most kids collected baseball cards, he kept wine labels.

"It began as a hobby," Cipolla said of his winemaking, and when he bought his first parcel, nearby vintners saw him as a "yahoo American." He gained local respect by apprenticing under master Mosel winemakers, including his wife. Most of their production is in the traditional Riesling wines of the area &#8212; kabinetts, sp&#228;tleses, ausleses &#8212; which they bottle under their own label, "SC."

"You will never find a screw cap on my wine bottles," Cipolla said.

Together Cipolla and Sailler tend about 17 acres, and all the winemaking is done by them, with the help of a few family members, employees, and harvest volunteers from the Air Force.

Last Christmas, retired Air Force Maj. Mark Schmidt showed up asking to volunteer for the harvest, not realizing it was long over. Instead, he became one of Cipolla&#8217;s employees. All winter, with his 2-year-old daughter bundled up on his back, Schmidt cut back the vines&#8217; old growth while singing her Elmo songs.

He pruned the vines again in the spring and summer, making sure the water and nutrients from the soil were feeding the grapes, not the leaves. On Friday, Schmidt sweated as he hauled most of the grapes up the hillside. He finally had his harvest.

"I will always appreciate, with every sip of wine, the labor that goes into it," said Schmidt, who as a former stockbroker in Washington, D.C., drank lots of wine without thinking much about it.

"People like to B.S. about wine," he said, "but you don&#8217;t know anything until you get out here with some clippers."