Spam I am: Koreans like meat from a can 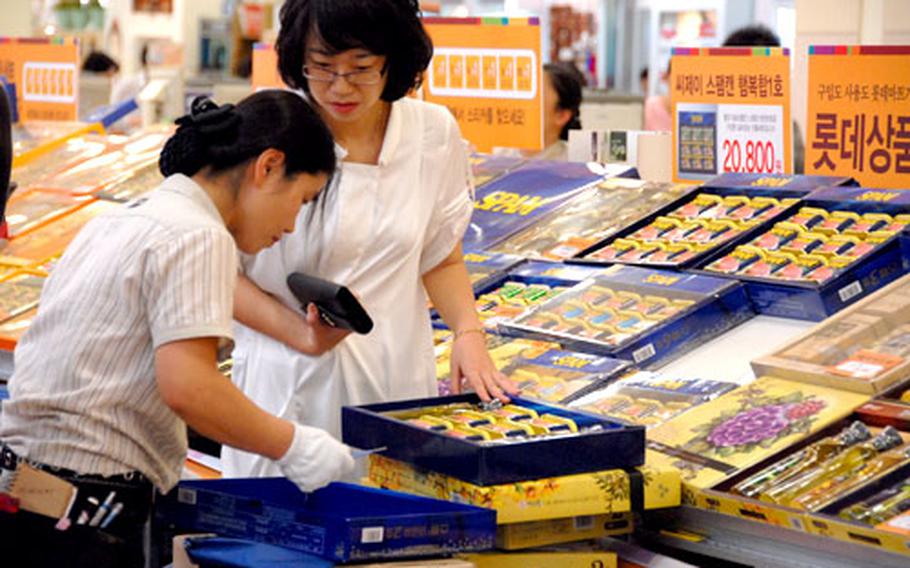 A customer at Lotte Mart in Seoul Station watches as a store employee checks a gift box of Spam. South Korea is one of the world&#39;s top consumers of Spam, which is a popular gift at Chuseok, one of the country&#39;s most important holidays. (Ashley Rowland / S&S)

A customer at Lotte Mart in Seoul Station watches as a store employee checks a gift box of Spam. South Korea is one of the world&#39;s top consumers of Spam, which is a popular gift at Chuseok, one of the country&#39;s most important holidays. (Ashley Rowland / S&S) 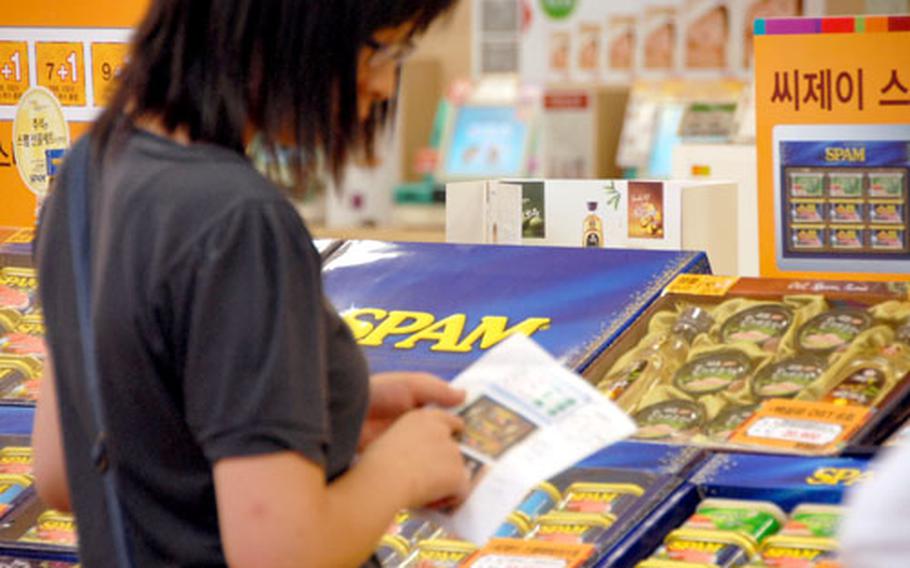 A customer at Lotte Mart at Seoul Station looks at a price list for Spam gift boxes, a popular present at Chuseok. (Ashley Rowland / S&S) 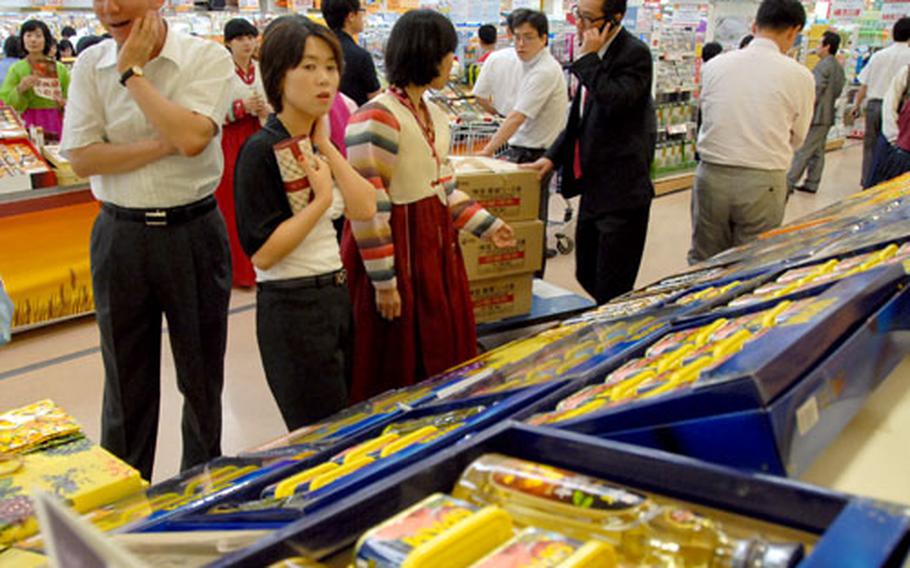 SEOUL &#8212; At a bustling Lotte Mart in central Seoul, Tae Hyun-jun bypassed the shelves of neatly packaged gift sets of Korean apples, grapes, ginseng and teas, and stopped in front of a display of potted hams. There, he filled his shopping cart with several blue, briefcase-sized boxes of Spam, gifts for his business partners on one of the country&#8217;s most important holidays.

Spam may be the brunt of jokes about mystery meat and clogged arteries in the United States, but the gelatinous canned meat is a staple in many Asian countries, a legacy of the U.S. military&#8217;s presence during World War II and the Korean War.

It&#8217;s especially popular in South Korea, where movie stars hawk it in TV ads and the U.S. military tracks sales of the commonly black-marketed item. In the last decade or so, it&#8217;s become a popular gift at Chuseok, which celebrates the harvest and is roughly akin to the American Thanksgiving.

South Korea is the only country in the world that sells Spam in boxed gift sets, said Jeon Sun-mi, a spokesperson for CJ Corp., the country&#8217;s Spam distributor. The sets of nine or 12 blue-and-yellow cans of Spam are heavily marketed during the Chuseok season.

Jeon didn&#8217;t know how many cans of Spam the company expected to sell this Chuseok season, but she said it&#8217;s the top seller among canned meats in South Korea, with about $72 million in sales so far this year.

Jeon said Spam is popular in South Korea because it can stay in storage "as long as you want," and goes well with Korean dishes, which tend to be spicy.

It&#8217;s often used in chigaes, or stews, and is mostly commonly served baked or fried and as an accompaniment to rice.

"The Korean people find it delicious, as well as very easy and convenient to cook," she said.

The U.S. military introduced nonperishable, easily portable Spam to Korea during the Korean War, when many people were starving, said Kim Jong-su, a history professor at Kunsan National University.

During the lean post-war years, when most Koreans survived on barley, and even fat and white rice were scarce, people considered American foods like Spam a luxury.

"I still remembered the first moment I ate Spam," said Kim, now 50. "My relatives brought it home from a U.S. military base when I was an elementary school student. It was a shock &#8212; too delicious to describe."

Like Spam, the practice of giving gifts at Chuseok is new to South Korea, said Mark Monahan, a professor of Asian studies at the University of Maryland in Seoul.

"In the city, they do not have a harvest or anything like that, so friends exchange gifts," said Monahan, who grew up in North Korea before the war. "Exchanging gifts is kind of a new thing in the city, a sign of urbanization."

At Lotte Mart, the South Korean equivalent of Target or Wal-Mart, customers recently perused a display of Spam gift boxes, located next to boxed sets of tuna and olive oil and sunflower oil.

Jung Soon-hee, 53, an assistant manager at a life insurance office, was there to buy Chuseok gifts for her co-workers. At the top of their wish list: Spam.

She said Koreans like Spam because it&#8217;s versatile, children love it, and it keeps longer than fruit, another popular Chuseok gift.

"With Spam, the whole family can enjoy their meals," she said.

"I think its saltiness attracts the appetite of the Korean people," she said.

South Korea now has the 11th-largest economy in the world and no food shortages, but many who grew up during or after the war, like Ko Jun-wha, buy Spam out of nostalgia.

She remembers when her oldest brother worked at Yongsan Garrison, the U.S. military base in Seoul, and took her on post while he bought Spam for their family.

"I felt very privileged. Every kid in the neighborhood was so envious of me," said Ko, 47, who talked to Stripes in a Seoul hospital. "People thought the Koreans eating American foods from the base were special. All the American foods were the best."