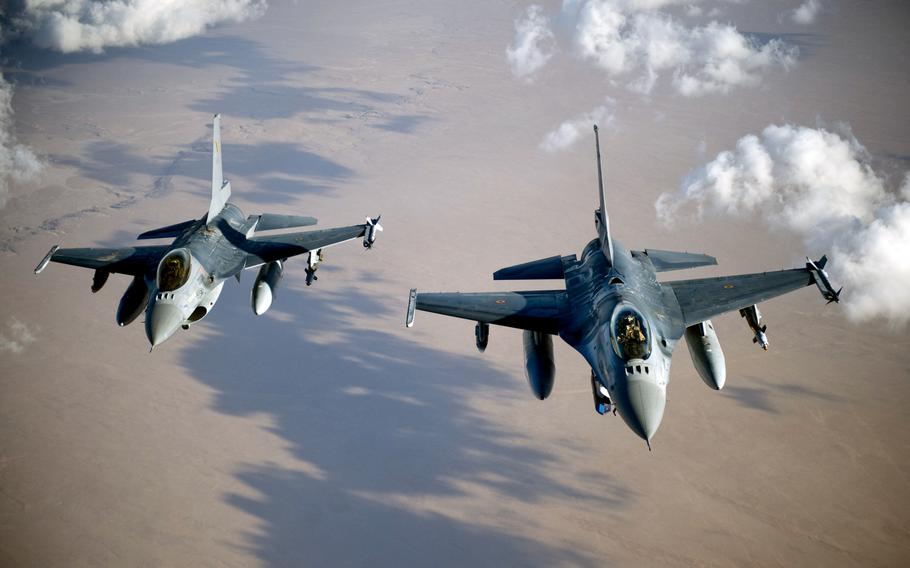 Two Belgian Air Component F-16A Falcons fly over Afghanistan after receiving fuel from a KC-10 Extender with the 908th Expeditionary Air Refueling Squadron in 2012. Belgian F-16s will take over the Baltic Air Policing mission from Germany at Amari Air Base, Estonia, while the Spanish air force will take over the mission at Siauliai Air Base, Lithuania, from Hungary on Jan. 7, 2016. (Courtesy U.S. Air Force)

Spain and Belgium are taking over NATO air patrols in the Baltics as part of a regular rotation focused on protecting alliance airspace in the region.

The transfer, which will occur Thursday in Lithuania and Estonia, marks the 40th rotation of NATO’s Baltic Air Policing mission since the effort began in 2004.

Spain will lead the Baltic mission for the first four months of 2016 with four Eurofighter Typhoon jets based at Siauliai, Lithuania. Four Belgian F-16 fighter jets will be based at the Amari Air Base in Estonia. They replace fighters from Germany and Hungary, which have been operating in the region since September.

The NATO air policing mission was launched to help the small nations of the Baltics, which don’t possess their own fighter aircraft.

Since Russia’s intervention in Ukraine in 2014 NATO has assumed a more muscular military posture across its eastern flank.NATO jets have been scrambled at higher rates than previous years, with more unidentified Russian aircraft operating near NATO territory.