SpaceX suing the Air Force to compete for launches 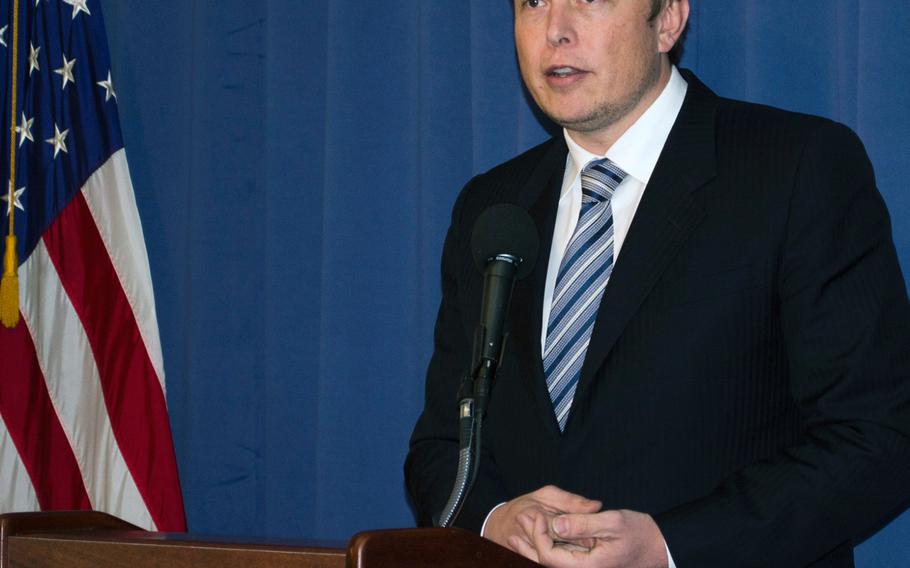 Elon Musk, the co-founder of private space exploration company SpaceX, said Friday that the company is suing the U.S. Air Force for the opportunity to compete for satellite launches. (Meredith Tibbetts/Stars and Stripes)

WASHINGTON — SpaceX says it has a cheaper way to launch satellites, and it’s suing the U.S. Air Force for the chance to prove it.

The private space exploration company with the ultimate goal of enabling people to live on other planets wants the Air Force to accept other contract bids and allowing them to compete for national security launches. They are filing the complaint through the Court of Federal Claims.

As of now, the Air Force has been working solely with United Launch Alliance.

“It just seems off that if our vehicle is good enough for NASA … that there is no reasonable reason we can’t launch a GPS satellite,” Elon Musk, CEO of SpaceX, said Friday during a news conference.

Atlas and Delta — ULA expandable launch vehicles — are currently used in space and in addition to the Air Force, customers include the Department of Defense, NASA, and the National Reconnaissance Office. The company is a 50-50 joint venture between Lockheed Martin and the Boeing Company that came together in 2005.

Musk testified March 5 before the U.S. Senate Appropriations Subcommittee on Defense that the virtual monopoly has suppressed competition since 2006.

The Air Force was notified of the claim shortly before Musk held the press conference, and is not commenting at this time.

Also at issue, Musk said, is that ULA uses rocket engines built in Russia, noting that the person who heads up the research in Russia is on a US sanctions list. With the ongoing crisis in Ukraine, Musk doesn’t think any Russian equipment should be used.

“It’s the wrong time to send hundreds of millions of dollars to the Kremlin,” he said.

The Air Force is paying ULA $750 million for the Space Expendable Launch Capability, and will pay ULA $630 million for three Air Force launch vehicles under a contract signed in December. ULA is guaranteed the payment of the former regardless of how many times they launch a year.

SpaceX says they could generate at least a billion dollars in annual savings.

“We’re on very good terms with most of the Air Force,” Musk said, adding that it was really just the procurement department that SpaceX has problems with.

SpaceX, founded in 2002, is the only entity involved in the suit, but Musk says other companies may join.

At the start of the press conference, Musk confirmed the soft landing of a SpaceX Falcon flight in the Atlantic Ocean. All Falcon vehicles for the company are made in America (manufactured mostly California and Texas), and are launched from Vandenberg Air Force Base or Cape Canaveral.

The craft was destroyed by large 20- to 30-foot waves, but the fact that it landed in one piece, Musk said, was a huge achievement.

They plan on landing one in Cape Canaveral by the end of the year, Musk said.

“Now we just need to bring it home in one piece,” Musk said.

SpaceX worked with Air Force to find a good landing area for the craft. Unfortunately, because of the high waves, they couldn’t get to it for two days. They were only able to recover pieces. They are only doing water landings until they land with accuracy.

The difference between the landings is important; an ocean landing means that it would take a couple of months for SpaceX to refurbish the craft. If the craft lands at the launch site on the ground, it could be ready to go again that day.

Musk understands that they will have to demo flights to show the public that reusing rockets can be achieved.