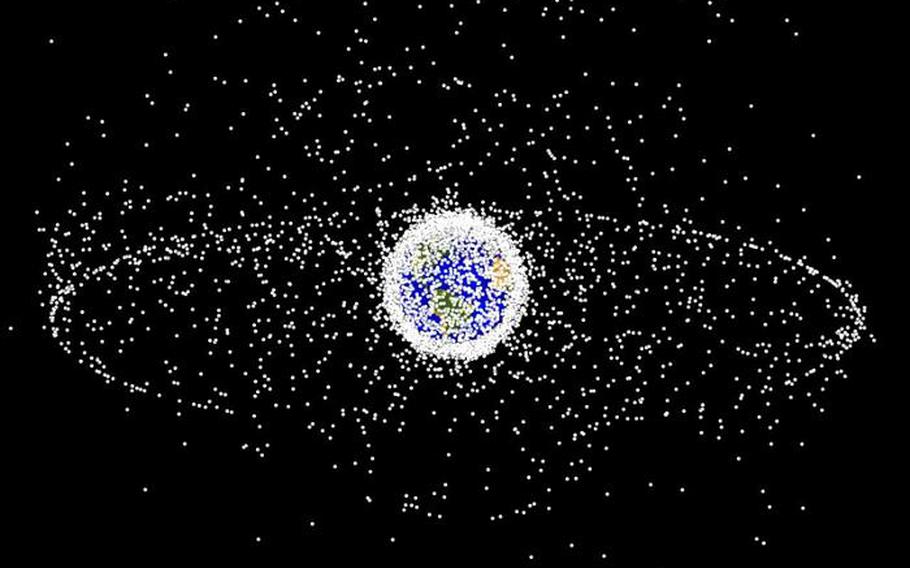 Computer-generated image of objects in Earth orbit that are currently being tracked. (NASA/Johnson Space Center)

Computer-generated image of objects in Earth orbit that are currently being tracked. (NASA/Johnson Space Center) 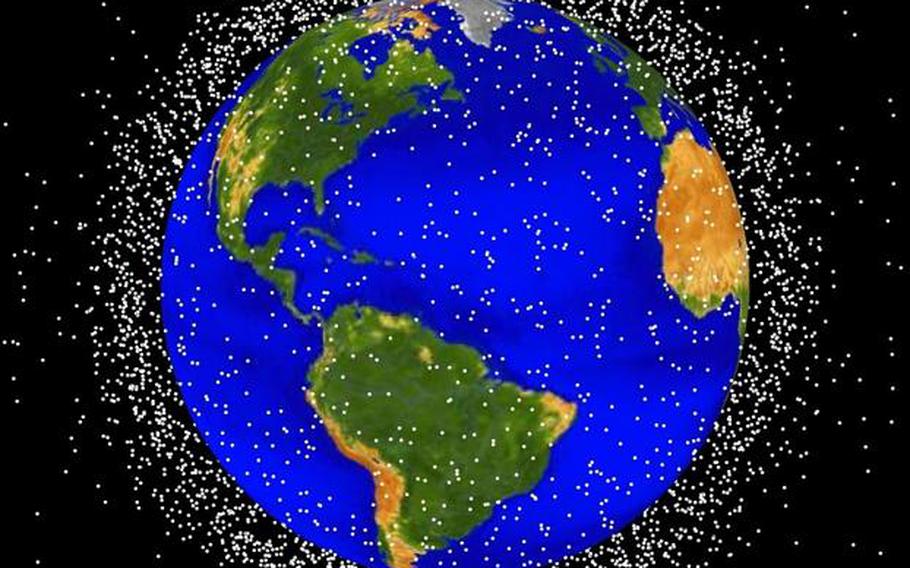 Most orbital debris is in low Earth orbit, where the space station flies. (NASA) 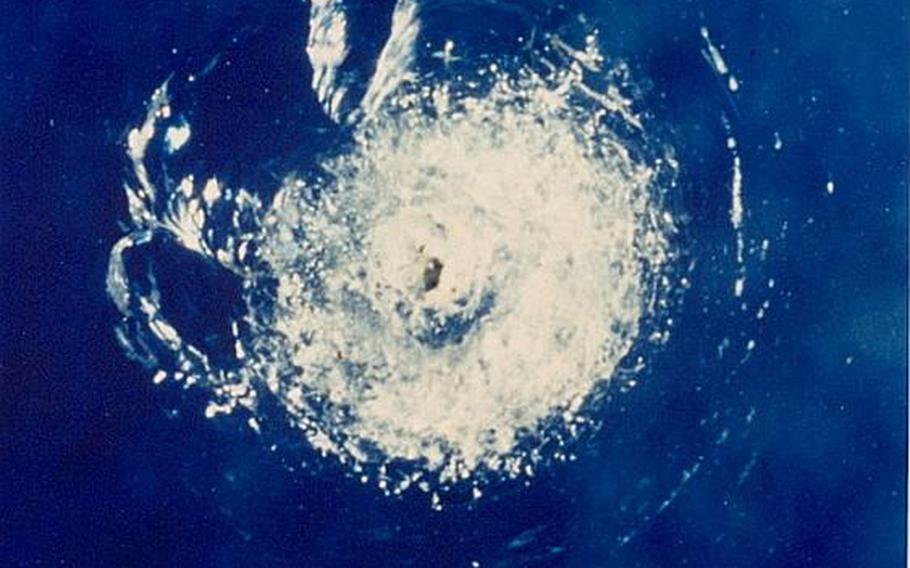 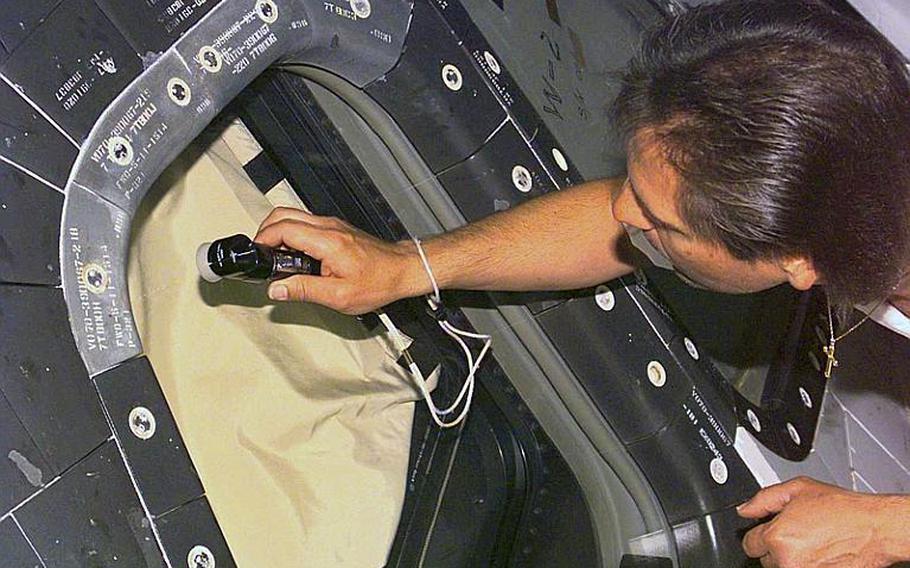 GRAFENW&Ouml;HR, Germany &mdash; Space may be the final frontier, but it&rsquo;s turning into a rough neighborhood &mdash; a limited number of Earth orbits increasingly crowded with satellites and littered with debris that can destroy valuable space assets.

Overcrowding in space is now a national security threat, experts say. U.S. Defense and State Department officials are grappling with the challenge of cleaning up the mess and encouraging &ldquo;best practices&rdquo; without compromising national defense.

In January, the Obama administration announced it would work with the European Union and other nations on an International Code of Conduct for Outer Space Activities.

The plan has sparked debate in Washington, with critics charging that any such agreement, though nonbinding, would limit defense activities.

But Gen. William Shelton, commander of Air Force Space Command, said a code of conduct could greatly ease the Air Force&rsquo;s &ldquo;nigh impossible&rdquo; job of monitoring traffic in the 73 trillion cubic miles of space between the Earth&rsquo;s surface and geosynchronous orbit altitude. It would also make distinguishing between friendly and potentially unfriendly launches easier.

Currently, more than 22,000 objects larger than four inches orbit the Earth, according to NASA. Many are catalogued, and closely monitored, but others aren&rsquo;t. Hundreds of thousands of smaller pieces of debris are equally capable of damaging orbital objects, the agency reports.

Meanwhile, more than 60 nations and government consortia have satellites in orbit, according to the State Department.

A 2011 report conducted by the National Research Council at the request of NASA and the White House concluded that the &ldquo;tipping point&rdquo; of orbital objects has already been reached.

The danger of such clutter has become more visible in recent years. Four of the eight known collisions among objects in orbit occurred since 2000, according to Securing the Skies, a 2010 report by researchers with the nonpartisan advocacy group Union of Concerned Scientists.

In 2009, a deactivated Russian satellite collided with a working telecommunications satellite owned by the multinational Iridium corporation. The result was the loss of both satellites and the creation of thousands of pieces of space debris.

As nations continue to rely on sensitive satellites, an accidental collision could easily be misunderstood as an attack, potentially sparking conflict, the authors of Securing our Skies argue.

&ldquo;It&rsquo;s in the United States&rsquo; best interest that those countries know how to handle their satellites, where they are and where they&rsquo;ll be,&rdquo; Laura Grego, a co-author of the report, said in a phone interview.

Theresa Hitchens, director of the United Nations Institute for Disarmament Research, in a U.N. podcast on disarmament issues, imagined what would happen if a satellite were to &ldquo;go dark&rdquo; as tensions ran high between two nations.

&ldquo;It&rsquo;s actually quite hard to know what&rsquo;s happened to your satellite because you just can&rsquo;t send up the repairman and take a look,&rdquo; she said. &ldquo;But in the heat of a crisis, what&rsquo;s going to be your first thought? So there&rsquo;s a whole lot of problems here.&rdquo;

Space in the battlefield

The tensions surrounding such a scenario have become less difficult to imagine. In 2007, the Chinese government used anti-satellite technology to destroy one of its own weather satellites. The move was widely criticized as both provocative and messy &mdash; the destroyed satellite slung thousands of pieces of debris into orbit, according to press reports.

China&rsquo;s test made it only the third nation to use anti-satellite technology, after the U.S. and the former Soviet Union, and the first to destroy a satellite with it since the end of the Cold War, according to a Congressional Research Service report.

In 2006, Chinese scientists used a ground-based laser to illuminate a U.S. satellite, a test of a system to &ldquo;blind&rdquo; enemy satellites, according to the report. And in 2010, China tested a ballistic missile defense system through an interception outside Earth&rsquo;s atmosphere.

Peter Hays, associate director of the Air Force&rsquo;s Eisenhower Center for Space and Defense Studies, said there is concern that China lacks diplomatic maturity when dealing with weapons testing.

&ldquo;We need to be real careful with the Chinese, because we did not grow up with them in outer space or on nuclear weapons as we did the Russians,&rdquo; he said.

The Department of Defense continues to develop and test anti-satellite capabilities of its own. In 2008, in what many saw as a response to the Chinese destruction of its satellite, the United States used an Aegis SM-3 Block IA missile to destroy a non-responsive satellite, USA 193, according to Securing the Skies. Although the satellite was at a low level of orbit &mdash; some 150 miles of altitude &mdash; newer versions of Aegis missiles are expected to reach 745 miles, Grego said.

At stake is a series of Earth orbits crucial to U.S. military and commercial operations. Satellites are used for mapping, communications and military reconnaissance. Global positioning satellites have become indispensible for many tasks.

Space is a &ldquo;contested domain&rdquo; akin to land, water, sea and cyberspace, according to the Pentagon&rsquo;s Joint Operational Access Concept released in January.

In a conflict, satellites would be targeted early, according to the Pentagon report, likely before the onset of lethal combat.

&ldquo;In fact, space and cyberspace will be priority domains for many future adversaries, both state and nonstate, because U.S. forces critically depend on them,&rdquo; the paper said.

The report warned that the U.S. must maintain a strong defense posture in space to deter and respond to any attacks.

&ldquo;In fact, even in the absence of open conflict, operations to gain and maintain cyberspace superiority and space control will be continuous requirements,&rdquo; the concept read.

Skepticism over a code

Congressional leaders have been especially vocal about a code of conduct and its consequences for national defense.

In a January letter to the president, four Republican congressmen likened a potential code to &ldquo;an international arms control agreement.&rdquo;

&ldquo;We are concerned that if the United States were to make a good-faith effort at implementing the requirements of such a code, there may be adverse operational impacts on U.S. military and intelligence community space operations,&rdquo; the congressmen wrote.

But for such a code to be effective at all, the major space-faring nations have to agree to it, said Jana Robinson, head of the Space Security Research Program at the European Space Policy Institute.

Both China and Russia prefer a new treaty to replace the Outer Space Treaty, a move opposed by most Western nations.

&ldquo;I think (agreement) is extremely important, because it&rsquo;s supposed to be a multilateral effort,&rdquo; Robinson said. &ldquo;So if just some of the nations sign up, it will basically not be effective.&rdquo;

Hays, of the Air Force&rsquo;s Eisenhower Center, said the code would set international norms as a first step to deterring conflict.

&ldquo;If you can&rsquo;t label something responsible or irresponsible, it makes it difficult to say something was bad,&rdquo; said Hays. &ldquo;That was one of the problems with the 2007 (Chinese anti-satellite) test &mdash; it didn&rsquo;t violate anything.&rdquo;

U.S. officials predict a multiyear effort before a code of conduct is complete.