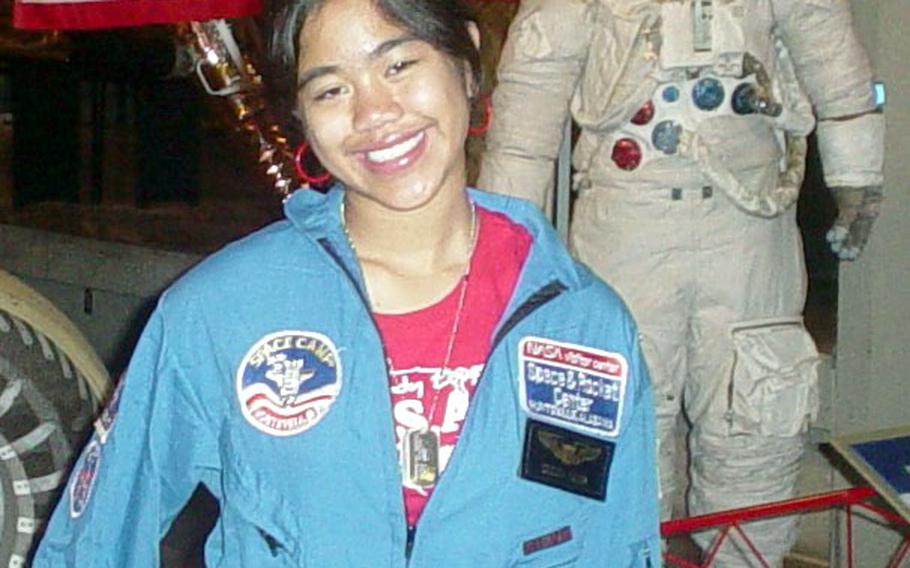 Kathrina Orozco, from Naval Air Facility Atsugi, during her July trip to the U.S. Space Camp in Huntsville, Ala. (Courtesy of Cynthia Orozco)

Kathrina Orozco, from Atsugi and an eighth-grader at Zama American High School, was the sole Navy dependent this year to earn a scholarship to the U.S. Space Camp in Huntsville, Ala.

Through the scholarship from the Military Child Education Coalition, the 13-year-old experienced low and high gravity in simulators, assisted on two mock space missions and built and launched a rocket.

She said the experience energized her love of science and space.

Through the Bernard Curtis Brown II Memorial scholarship, MCEC sends a handful of military children to the space education facility, where they can experience space exploration, bond with like-minded youngsters and strengthen their foundation in science.

The scholarship was named in honor of Bernard Curtis Brown II. The 11-year-old son of a chief petty officer died on Sept 11, 2001, when his flight was hijacked and crashed into the Pentagon. Brown was on his way to a National Geographic-sponsored student marine research project at the time.

The scholarship has sent children to Space Camp for the past four years. This year, 15 youngsters were selected, based on their application essays about patriotism and their love of science.

Camp participants experience something not unlike military life: weird terminology, cramped beds, lights-out curfews and strange food, such as the dehydrated ice cream given astronauts.

Participants faced many of the same experiences as astronauts through a series of simulators. For one activity, they were tossed around like a spaceship out of control; another placed them under heavy G-force pressure like that felt during take-off.

In another, they felt a moment of weightlessness, and the last let them play around at one-sixth the gravity felt on earth &#8212; just the conditions felt on the moon.

The group visited the space museum on site for lectures and &#8212; wearing space suits and helmets &#8212; took part in two mock space missions. As a mission specialist on the Endeavor, Orozco helped repair the Hubble telescope.

While Orozco experienced her first week away from her family, they made sure to keep close by. Her parents and sister spent the time shopping in Huntsville so Orozco could call them twice a day for updates.

Orozco said she would love to go back to Space Camp but whatever the future holds, this is one summer she plans to remember.