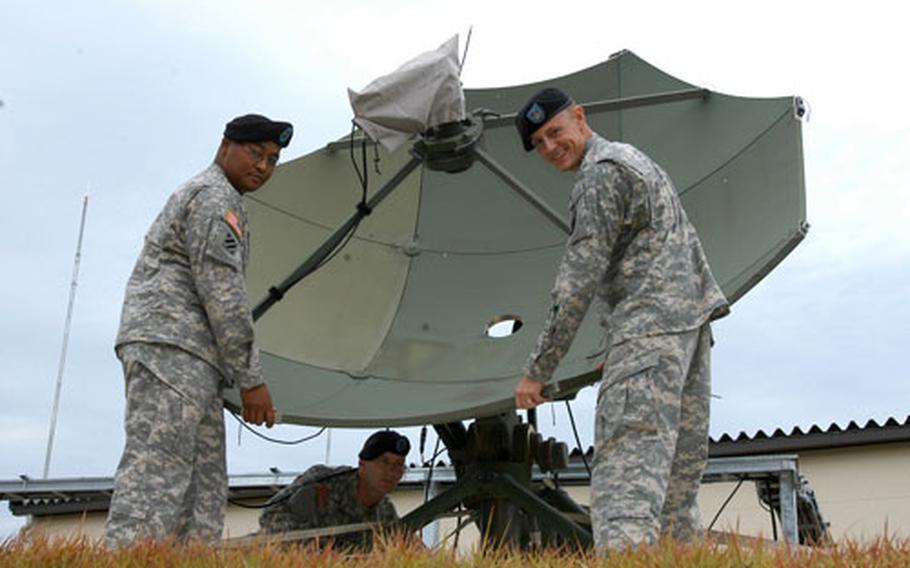 From left, Sgt. 1st Class Rickey Evans,Sgt. 1st Class Cody Dorman and Staff Sgt. Jonas Moody demonstrate how they move one of three satellite antennae that are part of the Joint Tactical Ground Stations detachment at Misawa Air Base, Japan. The unit uses satellite data to receive and process ballistic missile launch information. Its the first system of its kind in Japan, and the second in the Pacific theater. (Jennifer H. Svan / S&S)

MISAWA AIR BASE, Japan &#8212; About 24 soldiers will be assigned here to the Joint Tactical Ground Stations unit, or JTAGS, the first of its kind in Japan, according to U.S. Army officials.

Though its three satellite antennas can be picked up and moved in the back of vehicles, the station will be a permanent presence at Misawa for the foreseeable future, officials said.

Dalton was at Misawa on Friday to conduct a JTAGS site survey.

Though this is the first JTAGS in Japan, three others are deployed around the world: Osan Air Base, South Korea; Stuttgart, Germany; and an undisclosed location in U.S. Central Command&#8217;s area of responsibility.

Locating the system in Misawa &#8212; as opposed to another base in Japan &#8212; was more of a logistical decision than a strategic one, Army officials said.

&#8220;(The base) provided the support required for the soldiers, and it also had space available for us to put up a building,&#8221; Dalton said.

JTAGS is the second U.S. ballistic missile detection site in northern Japan. The Shariki Communications Site sits west of Misawa on the Sea of Japan. It&#8217;s been in operation for more than a year, run and supported by two soldiers and about 100 U.S. government contractors.

JTAGS is a space-based system, while the Shariki site is ground based, Jennison and Dalton said.

Shariki uses radar to &#8220;put out its own energy and receive a reflection back off of something in flight,&#8221; Jennison said.