Southern Afghanistan will be crowded for a few weeks 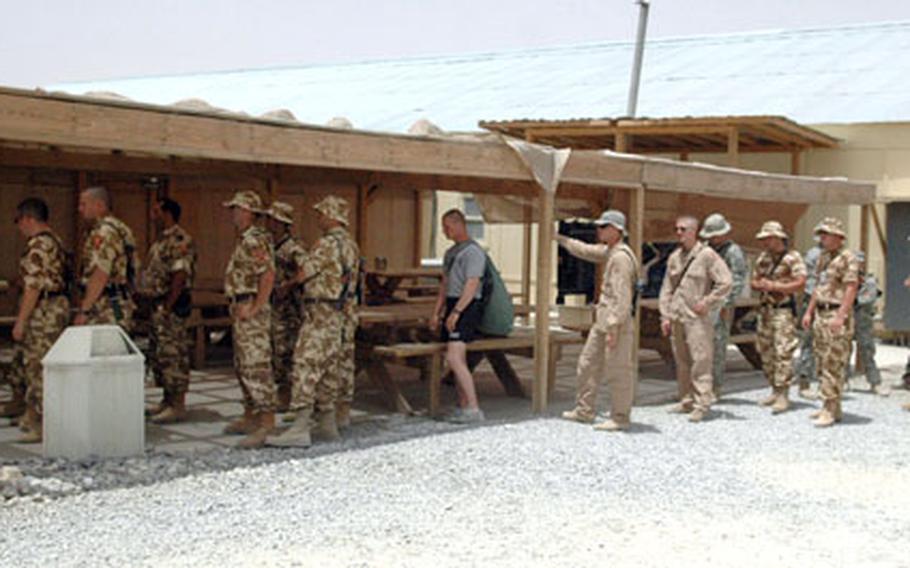 Romanian and U.S. soldiers line up outside of the dining hall at Forward Operating Base Lagman, Afghanistan, on Wednesday. NATO forces will soon take over major operations at this base and others from the soldiers of 2nd Battalion 4th Infantry Regiment, but for the next few weeks both sides will have to live with crowded conditions as the base absorbs several hundred new troops before the change-over. (Leo Shane III / S&S)

FORWARD OPERATING BASE LAGMAN, Afghanistan &#8212; After weeks of uncertainty, the 1,000-plus troops from 2nd Battalion, 4th Infantry Regiment in southern Afghanistan finally know what their future holds.

At least for the next few months. After that, it&#8217;s still a lot of question marks.

Battalion commanders received word last week that troops will move out of the southern part of the country in the next few weeks, as NATO forces take over security and nation-building operations in the region.

The 2-4 will shift its operations to the east to assist the 3rd Brigade, according to Lt. Col. Frank Sturek, commander of Task Force Warrior. That assignment will last until at least Thanksgiving.

The details of the mission are still classified, but Sturek said many of the new duties will mirror existing operations the troops have been performing since March in Zabul province and the surrounding areas.

Troops had been told they might leave the country as early as Tuesday and return to Fort Polk, La., or they might remain in the country until next spring.

While the new assignment answers questions about the near future, it still leaves in doubt where the battalion will be next summer.

Its parent brigade, the 10th Mountain Division&#8217;s 4th, is scheduled to deploy to Iraq in August 2007. While rumors had suggested the 2-4 might be exempted from that tour if it remained in Afghanistan past Nov. 1, Sturek said no firm details about the troops&#8217; role in Iraq have been released.

Even before the news came out this week, 2-4 troops tried to downplay their expectations.

One hub of the infantry&#8217;s operations in the south &#8212; Forward Operating Base Lagman &#8212; has welcomed several hundred Romanian soldiers during the past few days in anticipation of the impending turnover of Zabul operations, creating space issues.

Staff Sgt. Mahlehuho King, base housing coordinator, said he has moved dozens of U.S. troops into temporary tents without air conditioning for the next few weeks, and is still working to make sure everyone gets a bed of some variety.

There are long lines outside the base dining hall before every meal, and shower time has become increasingly difficult to get.

Sturek said the exact handover date hasn&#8217;t been announced and will be &#8220;conditions-based&#8221; on U.S. and coalition assessments of the overall security in the area.