South Koreans working for US military won't strike, for now 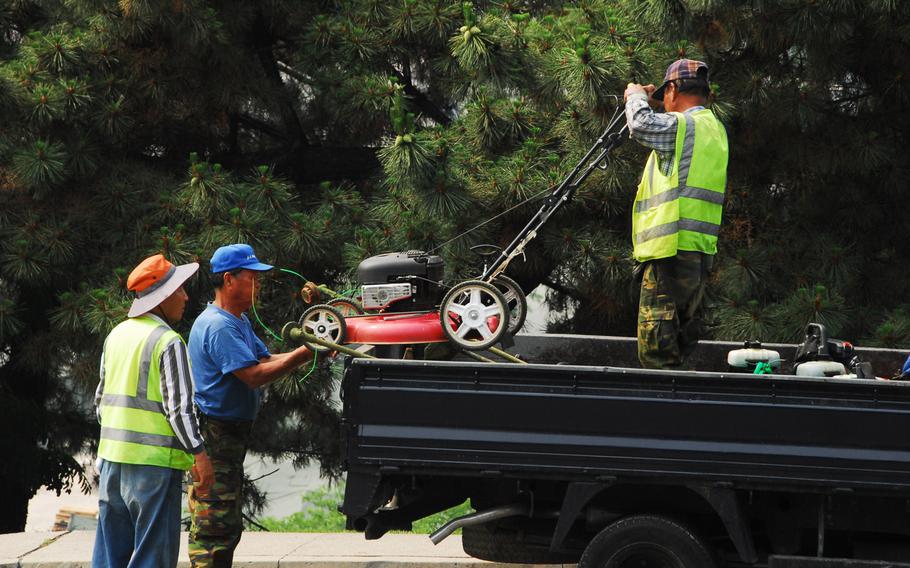 Workers load a lawnmower onto a truck at U.S. Army Garrison Yongsan's Camp Coiner in Seoul. A union representing thousands of South Koreans who work for U.S. Forces Korea says it will not go on strike for now, but plans to continuing negotiationg with USFK over unmet demands. (Ashley Rowland/Stars and Stripes)

SEOUL, South Korea — For now, thousands of South Koreans who work for the U.S. military will remain on the job, after threatening a strike earlier this year, according to the union representing the workers.

Union officials said members had voted overwhelmingly to strike in April — coinciding with President Barack Obama’s visit to Seoul — over complaints ranging from shortened work hours to frozen wages. However, the walkout was postponed after an April 16 ferry sinking that left about 300 people dead.

U.S. and South Korean officials said last week the strike had been averted.

Kim Song-yong, head of the Korean Employees’ Union, said that while U.S. Forces Korea has satisfied its demands for pay raises, a number of outstanding issues still have to be resolved.

“Members think USFK doesn’t care enough about them,” he said. Kim would not say whether or when the union might consider going on strike, saying it was taking a “wait and see” approach based on the progress of future negotiations with USFK.

South Korea’s Ministry of Foreign Affairs said in a press release that the labor dispute “was recently solved amicably,” and that USFK and the union will continue making efforts to improve their relationship and build trust.

USFK said in an email last week that the command “is pleased to note that the Korean Employees Union closed the current 2013-14 labor disputes and decided to move forward. Our Korean National employees are valued members of the team and USFK has made decisions which reflect our genuine concern for their well-being while maintaining force readiness to defend (South Korea).”

The union, which claims to represent about 9,500 workers, had asked for at least a 1.96 percent raise, retroactive to Jan. 1, with the expectation for additional negotiations this summer. USFK gave all South Korean workers a 1.7 percent raise, effective the beginning of May, calling it the maximum amount allowed by law. The command’s statement noted that the raise was given two months ahead of schedule.

In a letter posted on KEU’s website last week, Kim said he had decided to cancel plans for an immediate strike because of nationwide mourning over the ferry tragedy. “But,” he added, “our fight is by no means over.”

In a telephone interview, Kim said only the pay raise issue had been resolved, and the union has a number of outstanding complaints against USFK, including less-than-full time working hours for some Korean employees, a lack of promotion potential and salary increases for long-time workers who have reached the top of the pay scale, and job stability as U.S. forces relocate to Camp Humphreys.

Negotiations with USFK are set to resume next month, he said.