South Koreans show how they would assist in wartime 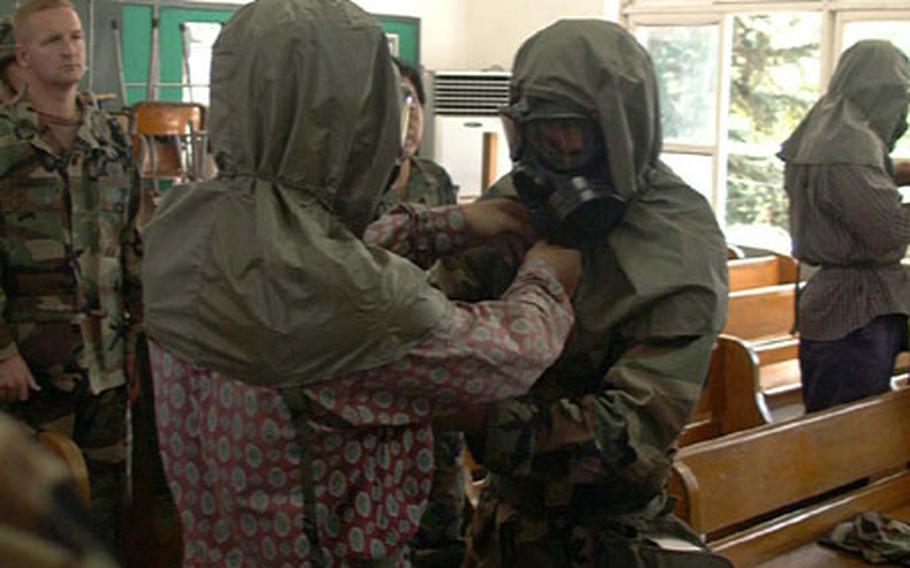 The two-day exercises &#8212; one in each of four locations around South Korea &#8212; drill the Korean Service Corps Battalion in setting up mobilization stations where wartime conscripts would receive initial equipment, training and administrative items.

During peacetime, the battalion serves as mechanics, drivers, carpenters, and other jobs.

Within about two days, those mobilized would be sent out from the stations to U.S. military units.

The company is based at the logistics headquarters Camp Henry, with the battalion based at Seoul&#8217;s Camp Kim.

Similar drills were held over the past three weeks in Pusan, Pyongtaek, and Seoul, Mullen said.

In Taegu, unit members set up a series of stations in the school classrooms.

Mobilized troops would pass through the stations and be given everything from field and chemical gear to identification cards and a quick health check-up.

&#8220;They would actually run a mobilization station for all the KSCs coming through the Taegu area, so it gives them a chance to practice on a small scale what they would have to do in a contingency,&#8221; said Lt. Col. Wilfred J. Plumley, the 20th ASG&#8217;s deputy commander.

In wartime, as the South Korean government drafted civilians to military duty, it would assign some 24,000 conscripts to the KSC, along with 800 South Korean Army Reserve officers.

Mullen said the Army would review the outcome of this summer&#8217;s mobilization exercise and pursue whatever improvements may be warranted.