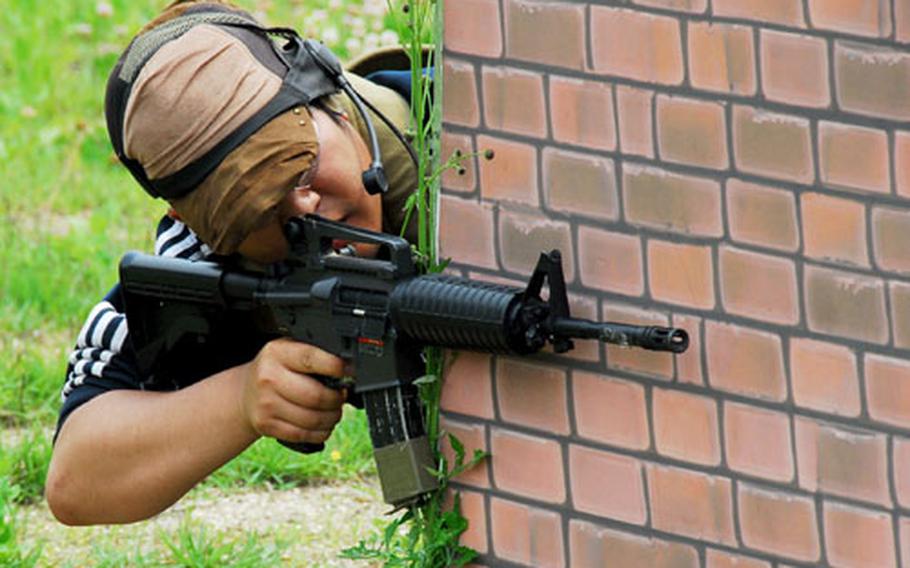 A player takes aim with a BB gun during the survival game. Survival games are popular in South Korea, despite the country&#39;s ban on guns and reluctance to send large numbers of troops to war. (Ashley Rowland / S&S)

A player takes aim with a BB gun during the survival game. Survival games are popular in South Korea, despite the country&#39;s ban on guns and reluctance to send large numbers of troops to war. (Ashley Rowland / S&S) A man playing a survival game peers from behind a prop before taking a shot, while another man who has been shot raises his hand. (Ashley Rowland / S&S) 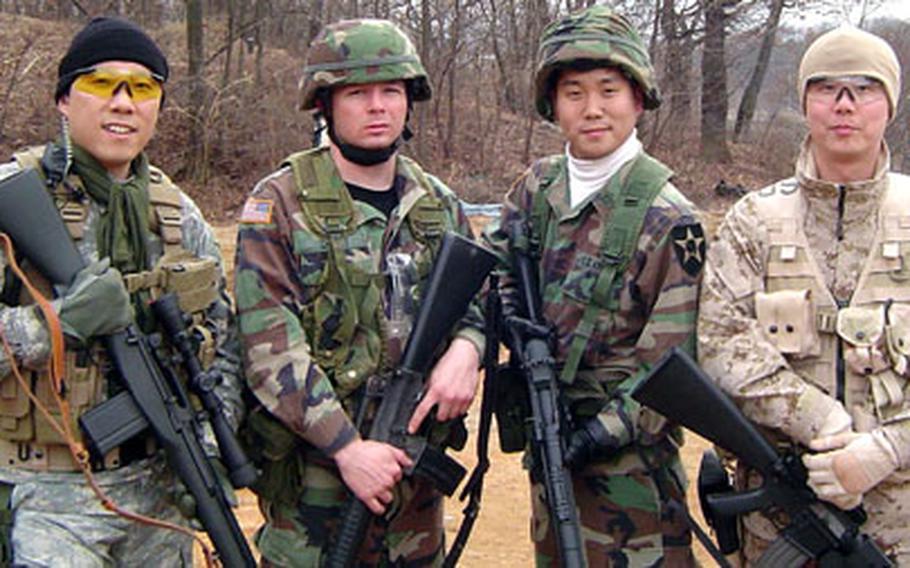 Spc. Clayton Baker, second from left, poses with South Koreans dressed in U.S. military uniforms after playing a survival game in which players pretend to be fighting a war. (Courtesy of Spc. Clayton Baker)

MUNSAN, South Korea &#8212; Dressed in U.S. military uniforms and carrying guns that look eerily like M-16s and M-240s, they run through the woods or dart behind man-made obstacles.

Just a few miles from the border between North and South Korea, these South Koreans stage their mock wars every weekend. Called "survival games," they have been popular across South Korea for years, among both military buffs and city slickers from Seoul and other urban areas.

"Why do I like shooting guns?" said Kang Tae-il. "Why do women like wearing makeup or playing with dolls? It&#8217;s the same thing."

In a country where few people have guns and talk of sending even small numbers of troops to Iraq or Afghanistan sparks outrage, playing war is a surprisingly popular pastime.

Survival games appeal to the "destructive instinct of the human being," said Baek Kyung-yeop, a former South Korean special forces soldier and owner of CQB OPS &#8212; short for "Close Quarters Battle Operations" &#8212; one of the 171 survival game businesses in South Korea.

"You think of yourself as a real soldier," he said.

He said between 40,000 and 50,000 people come to CQB OPS each year, often as part of a corporate outing. Most of those outings include playing paintball in the woods and riding all-terrain vehicles.

Serious gamers shoot at each other with BB guns, in the woods or at a firing range where they take cover behind props that look like buildings. When they are hit with a "fatal" shot, they raise their hands to signal that they&#8217;re out of the game, which usually lasts no more than three minutes.

Spc. Clayton Baker, a dental assistant at Camp Stanley, plays every weekend. He said the South Koreans spend lots of money buying expensive U.S. uniforms and their own mock weapons.

Serious players buy expensive uniforms and equipment, including bulletproof vests and fake weapons, to make the experience more realistic. The guns are exact replicas of M-240s and other military weapons, down to their weight. Baker said the M-16s are the real thing, just gutted and refitted to fire BBs.

The 25-year-old is usually the only American who plays, though some have talked of arranging a U.S. military-versus-South Koreans match. He likes being with the Koreans &#8212; helping them practice their English and eating lunch with them &#8212; but he plays because it&#8217;s fun.

"It&#8217;s kind of good to practice Army combat skills," he said. "We do drills in the Army, just kind of moving with our rifles and stuff, but it&#8217;s better to actually shoot."

Survival games are also a popular group outing. In a Confucian culture that values group cohesiveness, businesses commonly send their employees to play in an effort to build camaraderie and teamwork.

Lee Gun-hwa, a 29-year-old banker, was one of several dozen employees from Standard Charters Korea First Bank who spent a recent Saturday at CQB OPS for the annual company outing. She wanted to go to a musical, but the men in her male-dominated department lobbied for her to play a survival game.

To her surprise, she liked it.

"It&#8217;s like a real war," said Lee. "I was so surprised to see everybody fighting so fiercely, tooth and nail."

All able-bodied South Korean males are required to serve two years in the military. But Seo Jae-shik, a 28-year-old copywriter playing a survival game on a company outing, said he felt like he was in combat for the first time that day.

Kang said he is "98 percent certain" that survival gamers would outfight South Korean troops in a real battle.

He said U.S. servicemembers tend to be better at the game than South Koreans. The Americans are more flexible, and make decisions on their own. South Koreans rely too much on the decisions of their commander, he said. But for the gamers, the dress is as much a part of the experience as the shooting.

Lee wears a U.S. Army uniform with a captain&#8217;s insignia he bought on the Internet. He plans to give himself higher ranks as he gets older.