South Koreans honored for rescue of American from burning car 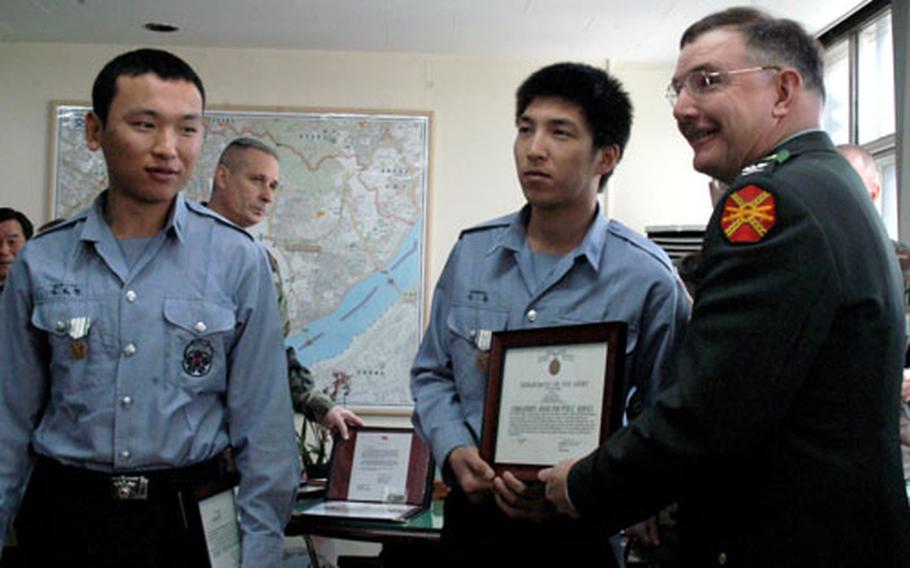 Cpl. Kim Bo-hyun, left, and Pfc. Kim Hoon pose with Area II commander Col. Timothy McNulty during a ceremony Thursday in Seoul. The two young officers were honored for pulling the husband of a U.S. officer from a burning car. (Teri Weaver / S&S)

Elliott L. Myrick &#8212; the husband of an 8th U.S. Army captain &#8212; was driving near Yongsan Garrison around 3 a.m. on March 13 when his car rammed into a tree and burst into flames, according to 8th Army officials and the two South Korean officers who saw the accident near Gate 37 behind the commissary.

Cpl. Kim Bo-hyun and Pfc. Kim Hoon, both 21, rushed over, pulled Myrick out through the passenger door and carried him away from the burning car, they said in interviews this week.

They used the little English they knew: &#8220;Hello, are you OK?&#8221; but got no response from Myrick. They took off their coats to cover the injured man and called for help.

&#8220;They put themselves at risk in order to remove the USFK family member&#8221; from harm, Area II Commander Col. Timothy McNulty told the two officers and their bosses through a translator. &#8220;Putting themselves at risk deserves a special award.&#8221;

McNulty presented the men with certificates of appreciation on behalf of himself and USFK Commander Gen. Leon J. LaPorte. LaPorte wrote a personal note to the men, saying that for Myrick, they &#8220;made a difference between life and death.&#8221;

Myrick suffered a broken leg and shoulder and was treated at the 121st General Hospital on Yongsan, base officials said. He is now recovering at home, according to the 8th Army&#8217;s public affairs office.

The night of the accident, Kim Hoon said, he sighed with relief when an ambulance arrived to help Myrick.

&#8220;When we were left alone again, we talked to each other how good and proud we really felt to save somebody,&#8221; Hoon said Thursday.

Both men, however, said they felt they were doing their job.