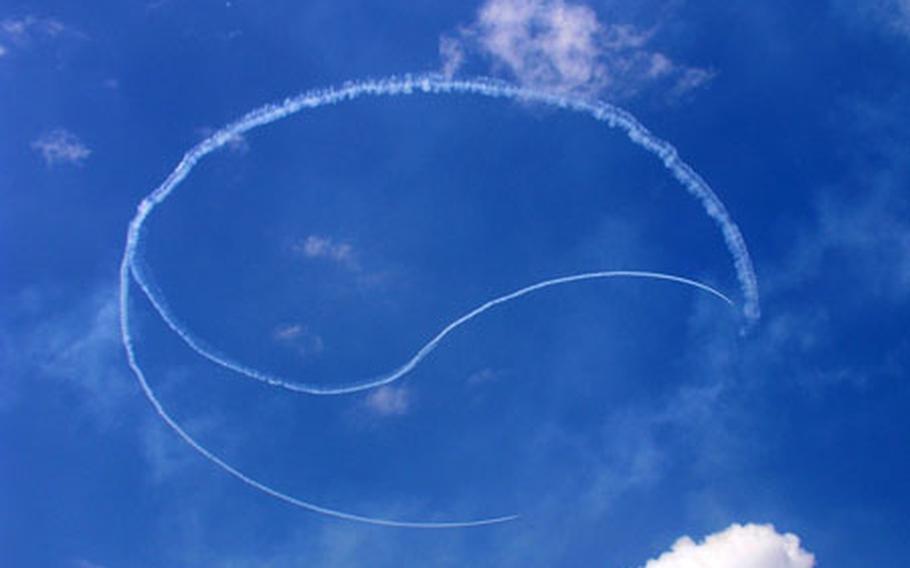 OSAN AIR BASE, South Korea &#8212; With their necks craned toward the hot blue sky and the roar of jet engines in their ears, several thousand mostly South Korean spectators turned out Sunday for the 2005 annual air show, hosted by the U.S. Air Force at Osan Air Base.

In a picnic-like atmosphere, the visitors &#8212; many of them entire families, with parents, young children and grandparents &#8212; got to see a series of flyovers by jets and other military aircraft of various types and walked the tarmac for a close-up look at dozens of other warplanes lined up for display.

But if many visitors were dazzled by the aircraft flyovers, others seemed content to set up for a picnic and talk among themselves. Their conversations were drowned out periodically when jets would climb, dive or streak low across the flight line, their engines resounding like a rock slide somewhere in the heavens.

The Black Eagles flew in six A-37 jets. One Black Eagle maneuver saw the jets make a long, plunging vertical descent in tight formation before breaking away abruptly in a kind of starburst, traceable by long, white smoke trails.

A high point for many Korean spectators came when two jets took center stage and, in smoke trails, drew two images. The first was a large valentine shape. That brought forth approving murmurs from the spectators.

But it was the second that won their hearts: Two aircraft made a white smoke circle, so simple it had the crowd in suspense to see what more it would become. Then, another white line was starting, and several seconds before the planes had even finished their skywriting, the crowd anticipated the finished product and broke into applause &#8212; it was the emblem that appears in the center of the South Korean national flag.

The air show&#8217;s first day was Saturday, with the audience limited to members of the U.S. military community and its South Korean employees.

For 6-year-old Richard Wayman, Sunday brought a chance to climb the boarding stairs for a close look at an A-10 fighter plane. He first made it clear he&#8217;d like to have the pilot accompany him.

The two climbed to the cockpit of the A-10 Thunderbolt II, a plane used for close air support and nicknamed the Warthog. Rassmussen is an A-10 pilot with the 25th Fighter Squadron and its assistant director of operations. The squadron is part of Osan&#39;s 51st Fighter Wing.

Richard asked Rassmussen whether the A-10 would fire its rockets in wartime.

Was Richard enjoying the show overall, someone asked.