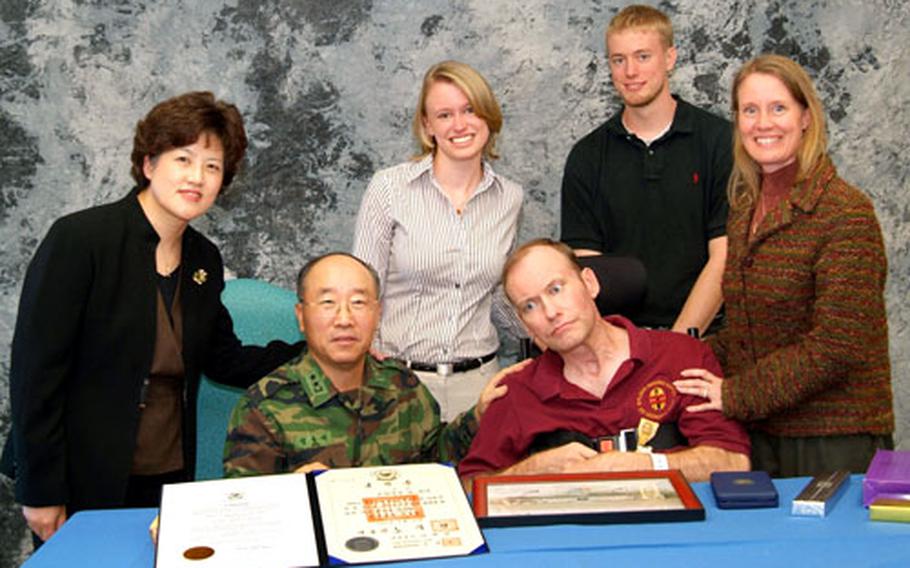 SEOUL &#8212; A U.S. Army colonel who collapsed during a military exercise with Korean forces in the spring has received a meritorious service medal from the Korean military, the first time the award has been pinned on an officer who ranks below general-grade, according to U.S. and Korean officials.

Col. Bryan D. Keifer was the chief of munitions for the Combined Forces Command, the U.S. and Korean team that controls 600,000 troops from both countries that plan and train in case of war. He served in South Korea from June 2004 to last May.

In March, Keifer collapsed during RSOI (Reception, Staging, Onward Movement and Integration) and Foal Eagle, one of the two countries&#8217; largest training exercises, according to Korean military officials. Keifer is now living at the Hunter Holmes McGuire Veterans Medical Center in Richmond, Va., and recovering from neurological damage resulting from an angioplasty procedure, according to U.S. Forces Korea.

Last month, Korean Maj. Gen. Chung Joong-suk traveled to the States and presented Keifer with the Korean Order of National Security Merit Samil Medal. The medal usually is presented to general-grade U.S. officers upon completion of their time in South Korea.

&#8220;Through his planning and integration he helped the millions of Korean and U.S. citizens that depend on intrepid soldiers like him to hold the line against the forces of aggression,&#8221; Chung told Keifer&#8217;s family, according to USFK. &#8220;Col. Keifer, we hope and pray for your speedy recovery and for you and your family&#8217;s health, happiness, longevity and prosperity.&#8221;

During his tenure, Keifer developed a system to better track current munitions stocks, created a way to dispose of obsolete munitions for the combined command in Korea to save shipping costs and implemented a new way of forecasting the weaponry needed during a wartime event, according to USFK.