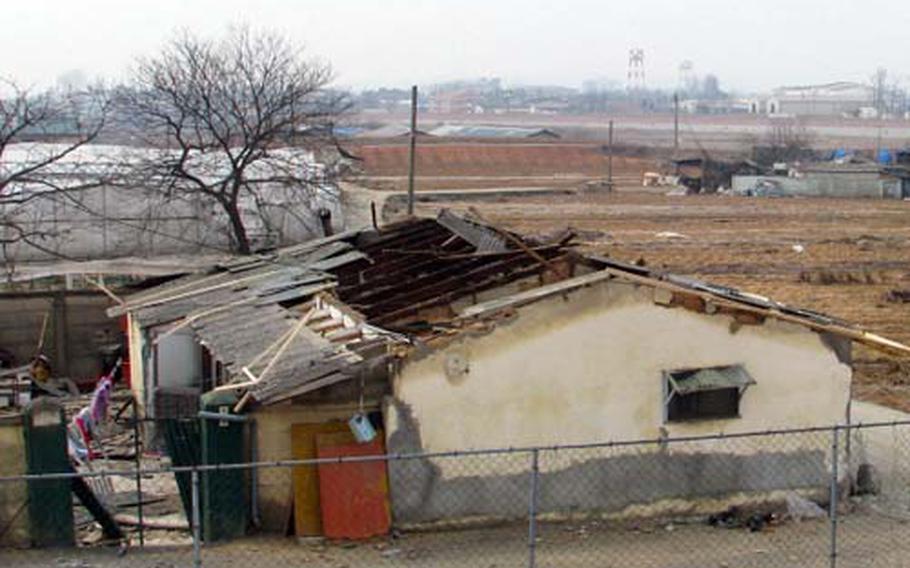 Pyeongtaek resident Kim Si-nam says his house was left uninhabitable after a U.S. Army helicopter kicked up strong wind gusts, blowing off part of his roof. Kim lives next to Camp Humphreys. (Courtesy of Kang Sang-won)

Pyeongtaek resident Kim Si-nam says his house was left uninhabitable after a U.S. Army helicopter kicked up strong wind gusts, blowing off part of his roof. Kim lives next to Camp Humphreys. (Courtesy of Kang Sang-won) 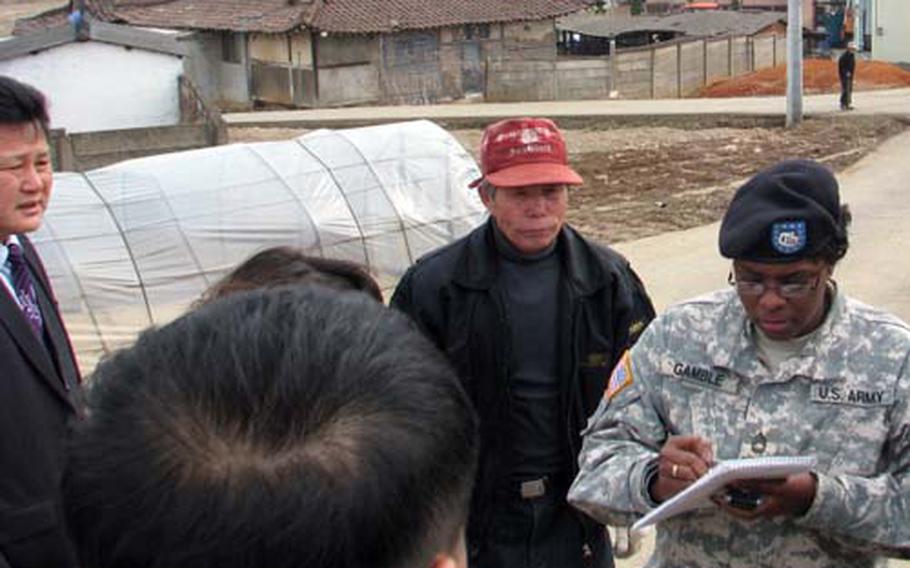 Sgt. 1st Class Krishna M. Gamble of the 2nd Combat Aviation Brigade at Camp Humphreys, South Korea, talks with villagers in Songhwa-ri, in February 2009. Black women are enlisting in the military at far higher rates than are white or Hispanic women, based on a new study by the Pew Research Center. (Courtesy of Kang Sang-won) 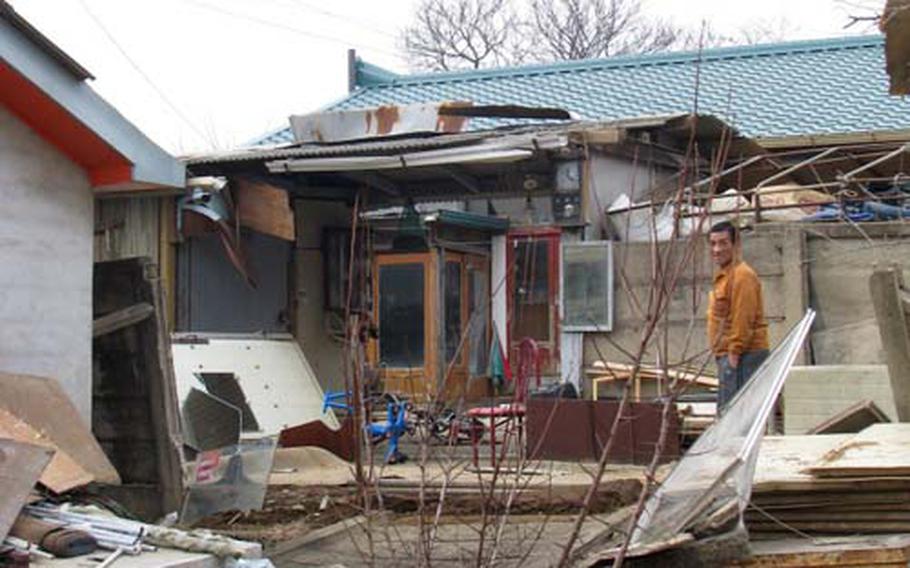 Kim Jong-chan&#39;s says his gate, fences and greenhouse were broken down Wednesday by gusts from a U.S. Army helicopter outside Camp Humphreys, South Korea. (Courtesy of Kang Sang-won)

PYEONGTAEK, South Korea &#8212; Residents whose homes took a thrashing from air gusts thrown down by a big helicopter outside the U.S. Army&#8217;s Camp Humphreys appealed Thursday for quick help from the U.S. military in getting them into shelter and repairing their homes.

"If they are our real &#8216;neighbor&#8217; as they claim, they should take immediate measures," said Lee Soon-gyu, head of Songhwa-ri, a village of about 60 households and 300 people just outside the perimeter of Camp Humphreys, which is in Pyeongtaek. Many of the residents are aging rice farmers.

The blast of air from the helicopter&#8217;s beating rotors cut through the village like a buzz saw Wednesday, ripping at roofs, fences, walls, doors, windows, pottery and other objects of domestic life, according to residents.

The incident occurred around 12:15 p.m. as the CH-47 Chinook heavy-lift helicopter was leaving Camp Humphreys with a piece of excavation equipment slung underneath.

"We have no place to go right now," said village resident Kim Si-nam, 63, who stayed at a hotel Wednesday night because the roof tiles were ripped from his home.

Kim and his wife were scrambling Thursday to find a place to spend the night, he said.

Said Kim of the U.S. military: "I am just hoping they can fix my home or arrange the accommodation for us."

Lee said it was as if the village had been hit "with a bomb" in wartime.

"Our town looks so devastated," he said.

Lee said that although the U.S. military has said it is working closely with local officials to help the residents, it&#8217;s up to the Americans to take the lead in getting the displaced into temporary shelter and fix the damage quickly.

Kim Jong-chan, 74, said the helicopter was carrying a "vehicle" of some type and appeared to be tilting to one side as if struggling with its load.

The roaring of the Chinook&#8217;s engines along with the dust kicked up by the wall of rushing air left him "a bit frightened," Kim Jong-chan said.

"I could hardly open my eyes later," he said.

His greenhouse was blown down, as were the gate and some fencing at his house, he said.

"Whenever the U.S. helicopters are taking off, the windows, doors of my house, are rattling hard," he said. "I cannot watch TV. Now I am really an old man. I take these annoyances for granted. But this was the biggest I&#8217;ve ever experienced."

Kang Sang-won, head of the civic group Pyeongtaek Peace Center, said his organization has frequently urged the U.S. military to change its air routes and has expressed concerns about the altitudes at which the helicopters fly.

But the U.S. military has dismissed the group&#8217;s concerns, Kang said.

Army Maj. Vincent Mitchell, spokesman for the 2nd Infantry Division, said he had no immediate information on Kang&#8217;s allegations, but that the U.S. military&#8217;s flying practices adhere to rules agreed upon between the United States and South Korea.

"We work closely with the Republic of Korea on the way we operate in this country, and so we do everything we can to be good neighbors," Mitchell said.

Mitchell said the Chinook was assigned to the division&#8217;s 2nd Combat Aviation Brigade and at the time of the incident was hauling a piece of equipment used in excavation work.

"All the details, everything, will come out in the investigation that is under way," Mitchell said.

Responding to residents&#8217; concerns about getting help with shelter and home repairs, Mitchell said the Army was "cooperating fully" with Pyeongtaek city officials.

"And we are going to do everything to ensure that any damage we may have caused is rectified, and the people affected by this are put back into their homes [and that] their homes are restored to their former condition," he said.

"I can&#8217;t get into specifics, but I do know that we are undertaking actions to ensure that those persons that have been affected are helped," Mitchell said.