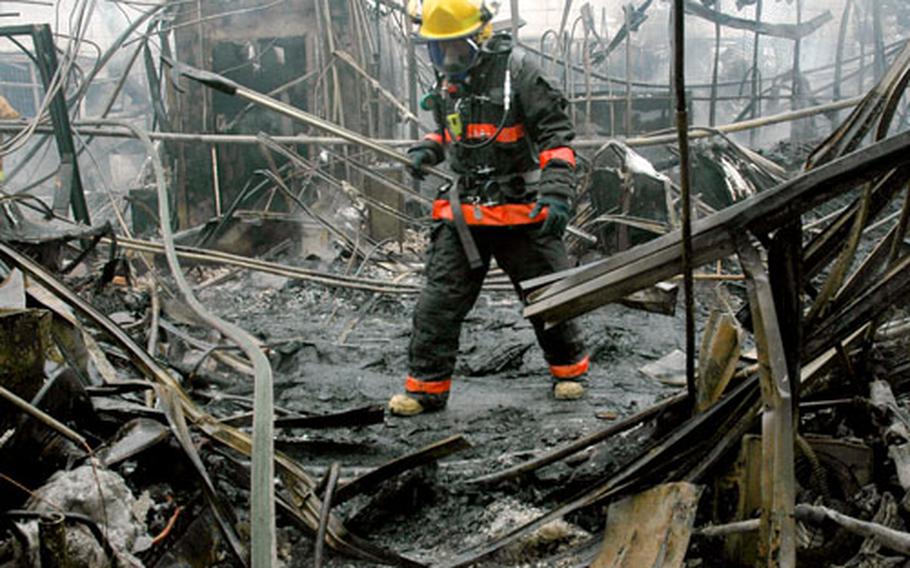 A firefighter walks through the remains of a DPW building on Yongsan Garrison, South Korea, on March 16. (Teri Weaver / S&S)

SEOUL &#8212; A 57-year-old South Korean woman faces arson charges after confessing to investigators late last week that she started last month&#8217;s fire on a U.S. military compound next to Yongsan Garrison, according to local police.

Kweon Jung-ja told South Korean police she went through an unlocked gate onto a U.S. military compound &#8212; which houses the Korean Service Corps &#8212; sometime before the March 16 fire, according to Oh Sang-seok, leader of the violent crime investigation team at Yongsan-gu police station.

Oh said the woman told police she entered an open-air carpentry area on the compound, found some work gloves on a pile of lumber and lit them with a cigarette lighter.

The statement was made on Friday. Oh said Tuesday that police were planning to recommend charges to the Seoul West District Prosecutor&#8217;s office. As of Tuesday afternoon, Kweon had not been charged.

Police no longer consider as suspects any of the five Korean Service Corps workers who were at the March 16 fire, Oh said. The five men had returned to their office to sleep after a night of dining and drinking. One of the workers admitted to police he left the gate to the compound, Gate 22, unlocked.

Kweon has been in police custody since the early-morning fire, which destroyed a service corps building and two Directorate of Public Works buildings and burned three Korean workers. The three men remained hospitalized this week, one still in critical condition, Oh said.

Kweon was found at the fire claiming she started it but she had refused to talk with police until Friday. Before the fire, Kweon had been seen outside the U.S. military base, complaining about the South Korean government and asking the United States for help, South Korean police have said.

It will be up to the Seoul prosecutor to decide whether her police confession reflects competency, the police said.

On Tuesday, the Yongsan police said the carpentry area building was within Yongsan Garrison&#8217;s DPW. But a USFK spokesman said that the only carpentry shop in that area is on the service corps compound. That compound has a separate, outside entrance at Gate 22 and does not lead directly into Yongsan Garrison, military officials have said.

South Korean police are the lead investigators in the fire, though military police and fire officials also are investigating.