Taxi drivers from Worldcup Arirang protest outside Camp Casey in Dongducheon on Wednesday, day five of a taxi cab strike in Area I and Area II. (Teri Weaver / S&S)

Taxi drivers from Worldcup Arirang protest outside Camp Casey in Dongducheon on Wednesday, day five of a taxi cab strike in Area I and Area II. (Teri Weaver / S&S) 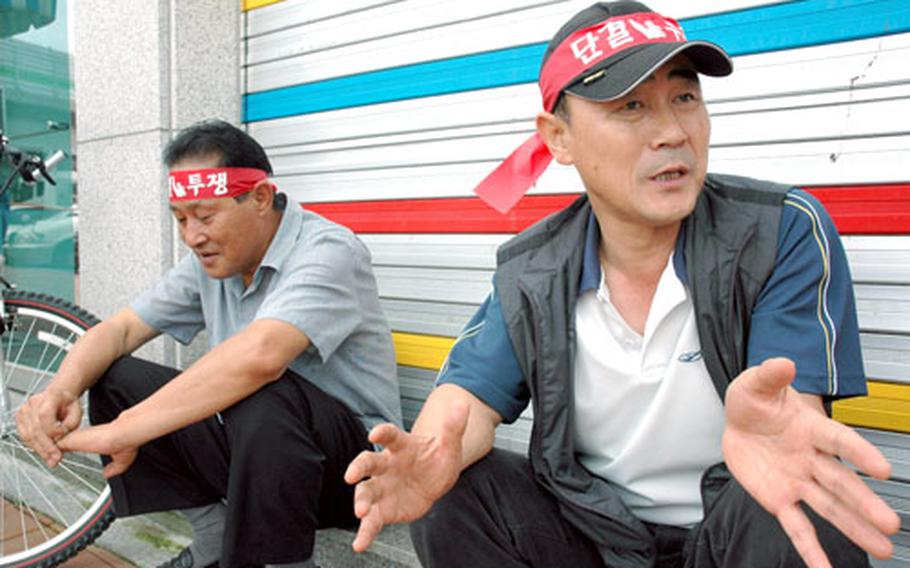 Park Byeong-hui, right, has been driving for Worldcup Arirang in Area I, Dongducheon and Uijeongbu, for 10 years. Park said he likes the work schedule as an on-base taxi driver but is worried the company doesn&#39;t invest enough in its workers or its taxi cabs. (Teri Weaver / S&S)

DONGDUCHEON, South Korea &#8212; A five-hour, overnight negotiation session between Worldcup Arirang Tourism Company Ltd. and its taxi drivers failed early Wednesday morning, with drivers still demanding a raise and company officials saying their only counteroffer would be to close the business, according to officials from both sides.

The negotiations &#8211; the first since taxi drivers stopped service on U.S. military bases in Areas I and II last weekend &#8211; were from 10 p.m. Tuesday to 3 a.m. Wednesday, both sides said.

Drivers have said they want a $105 monthly pay raise. The company says it is operating in the red and cannot afford to increase wages. Participants left the table without setting a date for future talks, union president Shim Woo-chang said Wednesday.

More than 100 taxi drivers from Area I &#8211; including Dongducheon and Uijeongbu &#8211; gathered outside Camp Casey Wednesday morning to protest the South Korean company&#8217;s management.

Choi Byeong-sik, Arirang&#8217;s Dongducheon office manager, watched the protesters from a nearby sidewalk. He said he was not a part of the overnight negotiations but knew meeting details.

Arirang contracts with the Army and Air Force Exchange Service to provide U.S. Forces Korea personnel with on- and off-base taxi service. AAFES officials have warned Arirang the strike is forcing AAFES to seek another taxi company.

All told, most drivers bring home $1,259 to $1,363 each month, not counting tips. That extra monthly money comes in government-required overtime pay, holiday and weekend pay and a regular monthly bonus of $105. The drivers also get to keep half of every cab fare they earn after meeting an $87 quota on each 13-hour shift, Shim said.

In recent weeks, union and company officials worked with a South Korean Labor ministry arbitrator to reach a settlement. The government official recommended a raise of 50,000 won, or $52. That was rejected, drivers have said.

Another demonstration was planned for Area II drivers in Seoul for this afternoon near Yongsan Garrison.