Yongsan Garrison firefighters remove Pfc. Jo H.S. from an elevator shaft after his head caught between the elevator and a metal support bar at Building S-1683, about a block from the “kimchi pot” gate at 1:45 p.m. Monday. (Erik Slavin / S&S)

Yongsan Garrison firefighters remove Pfc. Jo H.S. from an elevator shaft after his head caught between the elevator and a metal support bar at Building S-1683, about a block from the “kimchi pot” gate at 1:45 p.m. Monday. (Erik Slavin / S&S) 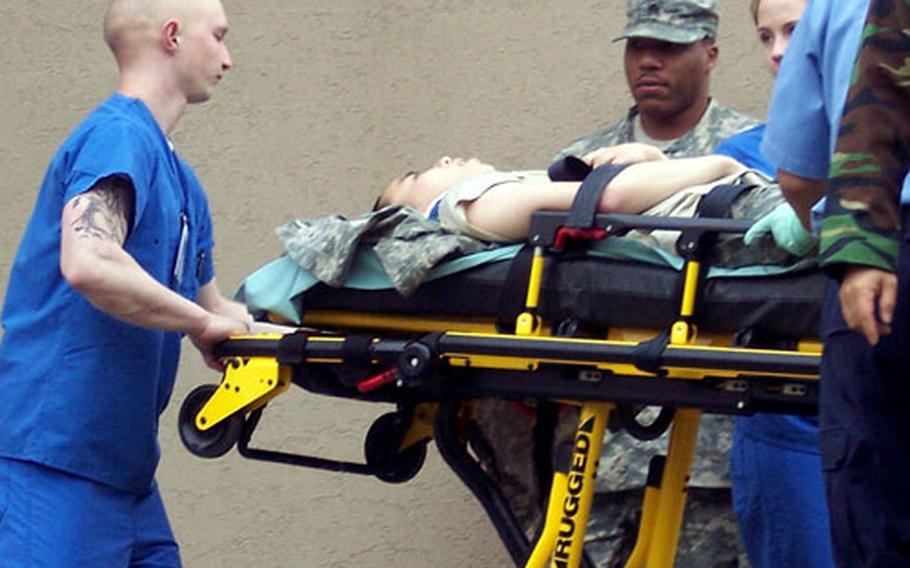 Medical personnel take the South Korean soldier to the 121st Combat Support Hospital, where he was treated and released the same day. (Erik Slavin / S&S)

YONGSAN GARRISON, South Korea &#8212; A South Korean soldier whose neck lodged between a metal bar and a service elevator was treated and released from a hospital Monday night, 8th Army officials said.

Pfc. Jo H.S. &#8212; whose full given name was unavailable &#8212; caught his head between the bar, glass and elevator car while moving supplies up a three-story outdoor service elevator at 33rd/85th Engineering Detachment Building S-1683 between 1:30 p.m. and 1:45 p.m., according to witnesses.

A woman who walked out of the building saw Jo, a Korean Augmentee to the U.S. Army, and placed a chair under his dangling feet to keep him from hanging, witnesses said.

Soon after, South Korean KATUSA soldier Cpl. Nam S.B., whose given name also was unavailable, ran under him and took Jo&#8217;s weight on his shoulders, according to a witness.

Firefighters arrived at about 1:45 p.m. and broke the glass, freeing Jo, who remained conscious.

Jo, who is assigned to the 501st Military Intelligence Brigade, was then escorted to a stretcher and sent to 121st Combat Support Hospital, 8th Army spokesman Lt. Col. Brodrick Bailey said.

Jo was delivering mail and packages when the mishap occurred. The elevator began going up before Jo expected and kept rising while Jo struggled, officials said. As of Monday night, it was unclear whether there was a mechanical problem.

No information was immediately available regarding the elevator&#8217;s safety and service record, Bailey said.