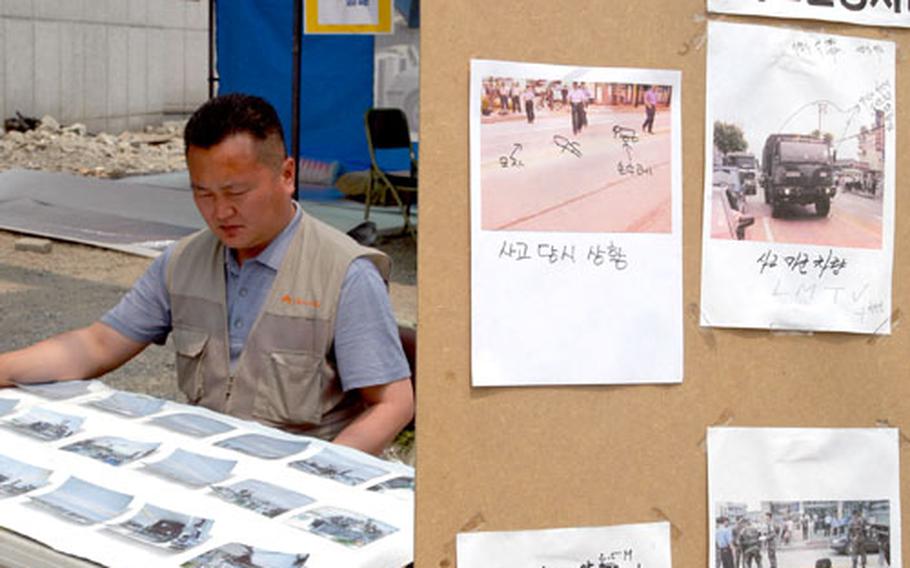 A South Korean protester looks at accident photos displayed Tuesday at the site where a woman was killed after being struck by a U.S. military vehicle last week in South Korea. (Seth Robson / S&S)

YANGU, South Korea &#8212; A group of residents will continue a sit-in at the site of a fatal traffic accident involving a U.S. military vehicle until an investigation concludes, the group&#8217;s leader said Tuesday.

Kang Hong-gu, head of the 160-person Tongducheon Civil Association, said the group began protesting minutes after an Army 2.5-ton truck hit and killed a 51-year-old woman who was pulling a yogurt cart down Peace Street on Friday afternoon.

One idea, he said, is to restrict the movement of bigger military vehicles during peak traffic times.

Kang said members of his group rushed to the accident site Friday to take photographs and gather witness comment. He said witnesses saw the woman &#8212; identified by funeral home personnel as Kim Myung-ja &#8212; crushed by both front and back tires.

Chu said the investigation is focusing on whether Bryant could see the 5-foot-2-inch woman on the street in front of the vehicle. The police official said Bryant denied seeing her in statements he made Friday night.

U.S. officials say they are cooperating fully with the South Korean investigation.

Kang also blasted the process that South Koreans must use to request compensation from the U.S. military after an accident. Many South Koreans become frustrated, he said, because it&#8217;s too difficult &#8212; and takes too long &#8212; to fill out and submit paperwork for a claim he said usually doesn&#8217;t result in enough compensation. &#8220;The Korean victims cannot be compensated properly for all the damages,&#8221; Kang said.

U.S. military officials visited the victim&#8217;s family members Saturday to apologize and offer a solatium payment, which traditionally expresses remorse but not guilt.

On Tuesday, 8th Army officials declined to say how much was paid to the family.

The payment is &#8220;considered a private matter between the Army&#8221; and those affected by the accident, said spokesman Lt. Col. Thomas Budzyna.