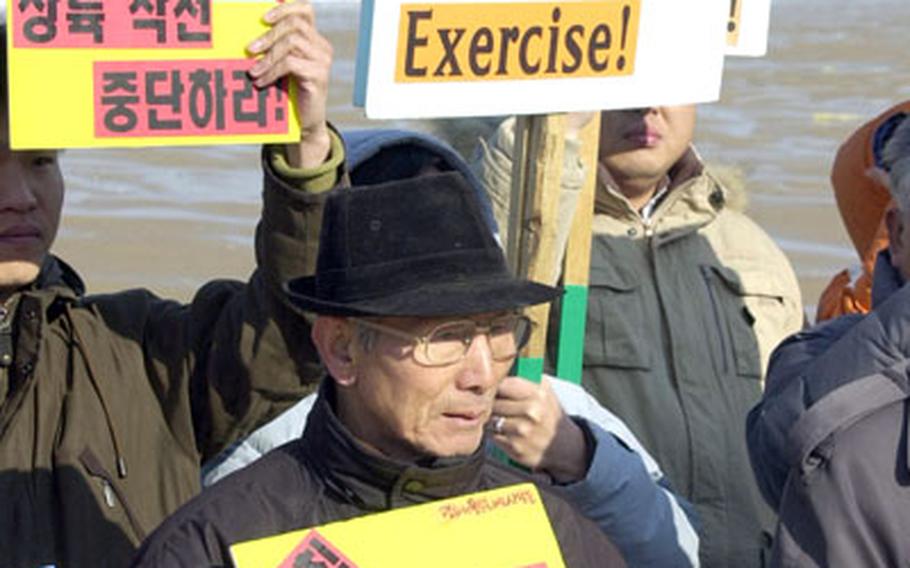 In this March 2006 file photo, a small group of protesters gathers before a beach assault exercise on Malipo Beach. Eight protesters who were on site that day were given suspended jail sentences Friday – nearly 21 months after the incident. (pnw# 39p cs) (T.D. Flack / S&S)

Seosan District Court officials said the eight were found guilty and were sentenced for &#8220;interfering with government officials in the execution of special duty.&#8221;

According to court officials:

Park Jong-yang, Kim Pan-tae, Gong Dong-gil and Choi Bong-yeol were sentenced to six months in jail, but their sentences were suspended for two years.

Kim Young-sik was sentenced to four months in jail with a one-year suspension.

During a phone interview late Friday, Choi told Stripes all the defendants were appealing the verdicts.

Choi, a member of the Pan National Unification Association, said he and other people gathered on the beach during the exercise to hold a news conference to raise awareness of the injustice of the training exercise.

Choi argued that the landing exercise isn&#8217;t focused on defending the nation, but instead is meant as practice for a pre-emptive strike against North Korea.

Shortly after the incident, the Ministry of National Defense released a statement that the &#8220;demonstrators, by illegally intruding (on) the training ground,&#8221; put themselves and the Marines at risk. The release also stated the training &#8220;is not an exercise to invade North Korea, as the demonstrators claim.&#8221;

As the first wave of U.S. amphibious assault vehicles hit the shore that day, the South Korean protesters surrounded one vehicle and chanted anti-military slogans. They also prevented one South Korean tank from off-loading by standing in front of the ramp of the U.S. Navy landing craft it was on. The only physical contact witnessed by Stars and Stripes on the beach was when some of the South Koreans pulled on a U.S. Marine&#8217;s backpack as he tried to move inland.

The beach landing was part of Reception, Staging, Onward Movement and Integration &#8212; the Combined Forces Command&#8217;s largest annual training exercise, during which forces work on their ability to receive and integrate forces from outside the country.