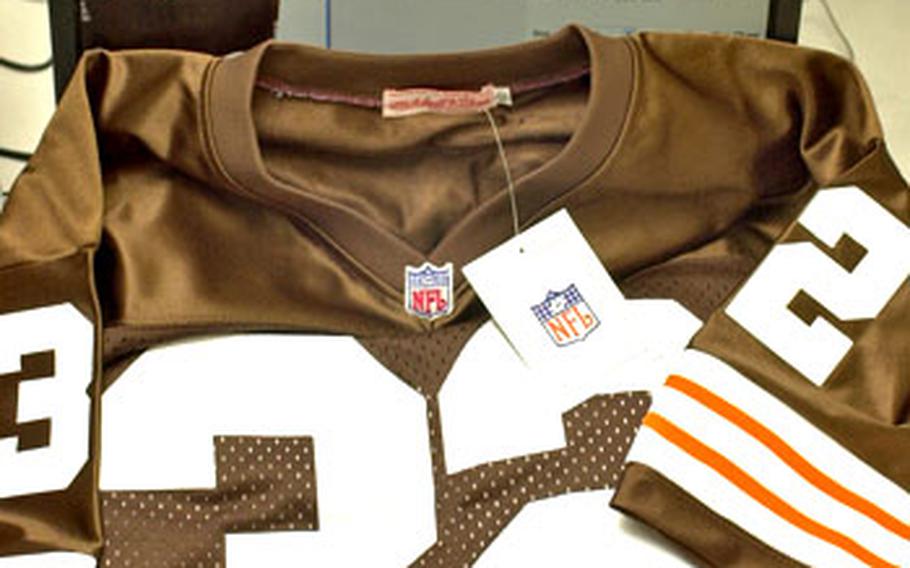 A jersey purchased for $15 at a store outside Camp Casey in South Korea is displayed in front of the NFLshop.com Web page advertising the jersey from the same manufacturer for $284.99. However, given differences between the jersey and the one pictured on the Web page — including the NFL logo on the neckline and the length of the sleeves — the one purchased appears to be a knockoff. Mitchell & Ness patches have apparently been affixed to a Reebok-style jersey. (Jon Rabiroff / S&S)

DONGDUCHEON, South Korea &#8212; U.S. troops who buy Korean-made counterfeit professional sports jerseys on the cheap and send them home for resale are in effect acting as middlemen in the illegal international distribution of the goods, authorities here say.

U.S. personnel are buying up jerseys bearing the names of players from the National Football League, National Basketball Association and Major League Baseball, and shipping or bringing the fakes home to the U.S. where they can be resold for upwards of 10 times their South Korean price, Gyeonggi Provincial Police said.

The problem has gotten so bad, police said, that the U.S. Embassy has gotten involved and is pressuring South Korean authorities to crack down on the counterfeit-jersey industry.

Three South Koreans were arrested recently for selling the knockoffs at a shopping mall near Camp Casey, and more than 4,000 jerseys were confiscated with an estimated market value of close to $500,000, police said.

An unnamed Gyeonggi Provincial Police official was quoted in the Kyeongin Daily newspaper as saying the "U.S. Embassy has requested us to stop fake-item sales, informing that some (U.S. Forces Korea) soldiers are buying this imitation clothing at one-tenth of the price of the original items and selling them at expensive prices in their home country.

"That&#8217;s the reason for the sudden crackdown on fake-clothing sales."

Embassy spokesman Aaron Tarver said he did not know where police got that information but said embassy officials could not comment further on the issue.

A senior investigator with the Gyeonggi Provincial Police, who spoke to Stars and Stripes but declined to give his name, said the investigation into the production and distribution of counterfeit jerseys was launched at the request of U.S. Embassy officials.

The investigation continues and police hope to eventually shut down the factory or factories responsible for manufacturing the fake jerseys, he said.

While there are countless Web sites dedicated to the difficult task of telling the difference between authentic name-brand jerseys and knockoffs, Stripes was able to identify at least one apparent fake being sold near Casey &#8212; a 1964 Jim Brown Cleveland Browns jersey bearing the label of manufacturer Mitchell & Ness that sells online for $285, but also with several features consistent with a similar jersey produced by Reebok which can be found on NFLshop.com for $125.

The sale of sports merchandise is big business, with annual sales estimated at $4 billion, according to Forbes.com. Likewise, counterfeit sports jerseys have flooded the market in much the same way as have knockoff designer clothes, watches and sunglasses.

While U.S. soldiers were not implicated in the case that brought the arrests outside Camp Casey, the investigator said he had a message for them: "I want to tell them not to buy these fake goods. I think they may not know it is against the law regarding protecting intellectual property rights."

The Jim Brown jersey appeared at first glance to be a high-quality, name-brand item. However, when it was compared to the Mitchell & Ness-manufactured jerseys for sale on both the company and NFL Web sites, it was clear the label and the features on the jersey did not match. The jersey in the store had the NFL logo on the neckline and Brown&#8217;s name on the back &#8212; two features not found on the Mitchell & Ness jersey for sale on the Web. In addition, the sleeves on the store jersey were shorter than those pictured on the Web.