South Korean man with coronavirus is from Pyeongtaek, US military says, urging caution 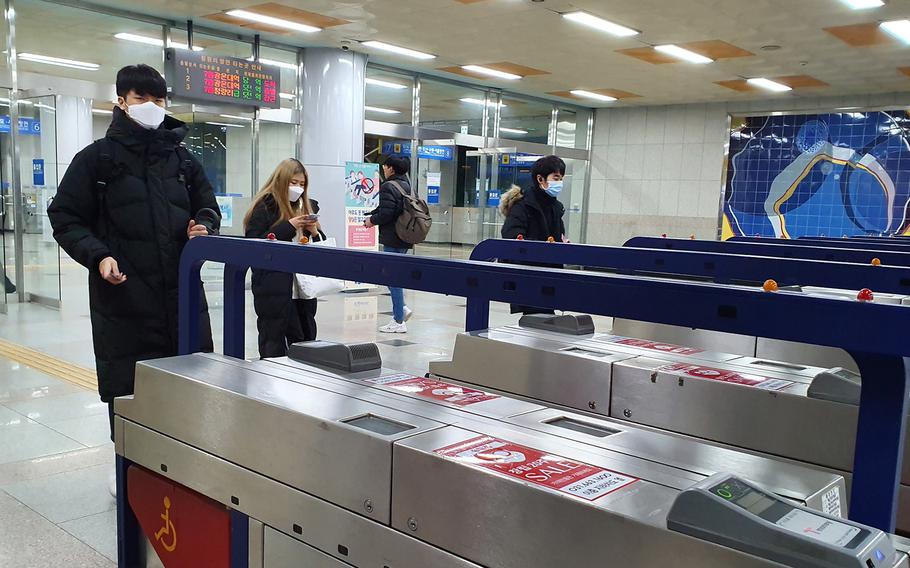 SEOUL, South Korea — The U.S. military urged people to seek medical care when necessary and avoid nonessential travel to China after confirmation of a case of coronavirus in a South Korean man from the vicinity of two U.S. bases.

A man from Pyeongtaek, a city close to Camp Humphreys and Osan Air Base, is one of four South Koreans with the potentially deadly, flu-like disease, according to a U.S. Forces Korea announcement Monday.

President Moon Jae-in, meanwhile, ordered that all people entering South Korea from the Chinese city of Wuhan be checked amid growing fears about the spread of the virus.

U.S. Forces Korea, the main command for some 28,500 American service members stationed on the divided peninsula, issued a carefully worded public service announcement on social media in a bid to prevent panic.

South Korea has confirmed that four people recently returned from China had been infected with the virus, which originated in Wuhan, an industrial city with a population of 11 million.

The most recent was a 55-year-old South Korean man who tested positive after he visited a local clinic with cold symptoms on Jan. 21, a day after returning home from Wuhan, according to the Korea Centers for Disease Control and Prevention. KCDC officials declined to provide more details, saying the case was still under investigation.

“There has been a recent global outbreak of a new virus spreading from Wuhan (China) with four confirmed cases in Korea and one of the four patients, who resides in Pyeongtaek, being admitted to Seoul National University hospital for observation and treatment,” the USFK notice said.

“There are no known cases where the virus is being transmitted from person to person in Korea,” it added. “Be advised that this is cold and flu season, and the coronavirus shares similar symptoms.”

The military urged people experiencing those symptoms to “seek US medical care/treatment” and to “call ahead to the medical clinic to advise them of recent travels and current symptoms.”

Other guidelines included wearing masks or covering your mouth and nose with a tissue or sleeves when coughing or sneezing and washing hands with soap and water for at least 20 seconds or using alcohol-based hand sanitizer.

It also advised people to “avoid nonessential travel to Wuhan and China if possible,” and to avoid travel or contact with others while sick.

China has implemented sweeping efforts to contain the viral disease as the death toll in the country rose to 80. Several infections also have been confirmed in other countries and in the U.S., including in Washington, Illinois, California and Arizona.