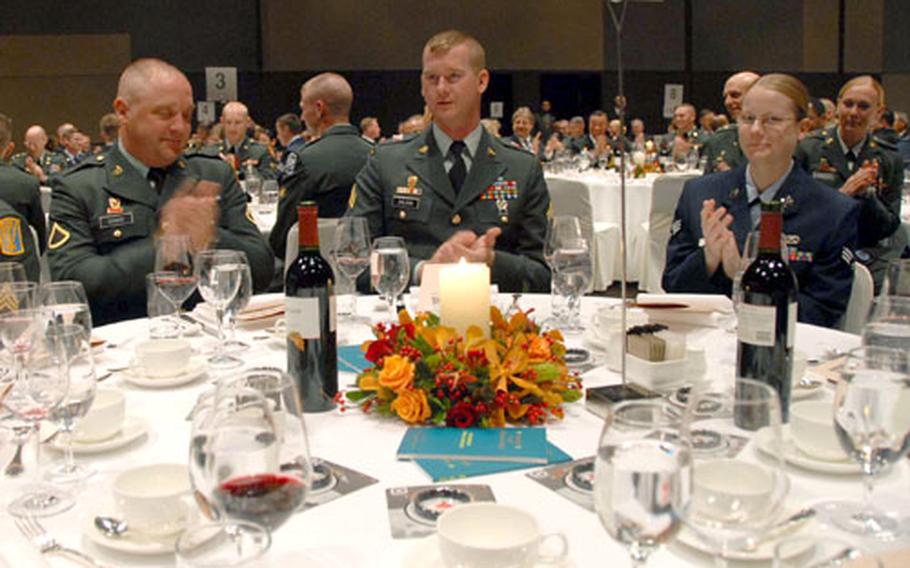 The troops, clad in their dress uniforms, were welcomed to an enormous Shilla Hotel ballroom by association chairman Dr. Wang Sang-eun, who told them that they were part of a long line of U.S. personnel who have made invaluable contributions to the country and region.

He explained that the U.S. military presence has enabled South Korea to make huge economic, political and social strides since the end of the Korean War.

He also called on South Korean politicians to support the U.S.-South Korean alliance, saying that the majority of the country&#8217;s citizens don&#8217;t trust the ruling party.

U.S. Forces Korea commander Gen. B.B. Bell told the guests &#8212; enlisted troops and company-grade officers &#8212; that KAFA plays an important role in the peace, security and stability on the Korean peninsula. Bell said that when the organization was formed in the mid-1970s, founders said, &#8220;we need a way to project the friendship between the two nations.&#8221;

The association, which sends troops on countless day trips, home visits, concerts and other events &#8212; such as Tuesday&#8217;s annual party &#8212; has spent more than $9 million supporting U.S. troops since its inception, Bell said.

He also said that the goal is to maintain the U.S.-South Korean alliance, &#8220;as long as we are welcome and wanted&#8221; in this country.

Bill Stanton, deputy chief of mission for the U.S. Embassy in Seoul, gave the toast before the buffet-style dinner, thanking the South Korean government, KAFA and the U.S. troops.

When Private 1st Class Mark Domingo, of the 38th Chemical Detachment, learned that he could win an airline ticket, he had a quick response. &#8220;I hope I get it,&#8221; he said.