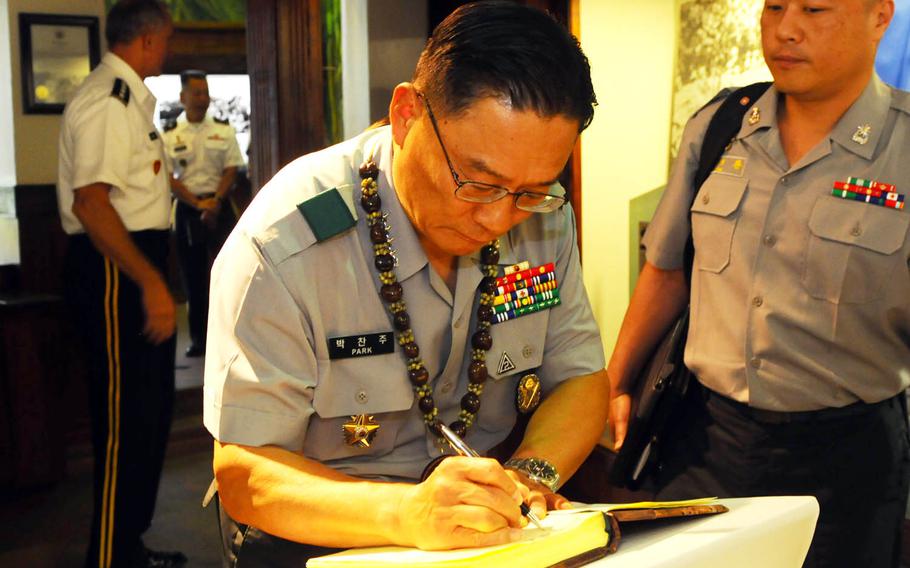 South Korean soldiers serving at the official residence of Gen. Park Chan-ju were ordered to remain on-call around the clock and wear electronic bracelets that vibrated whenever family members called on them, the defense ministry said. (Christopher McCullough/U.S. Army)

SEOUL, South Korea – A four-star South Korean general and his wife have been accused of treating soldiers like “slaves,” prompting calls for measures to improve conditions for the nation’s conscripts.

Soldiers serving at Gen. Park Chan-ju’s official residence were ordered to remain on-call around the clock and wear electronic bracelets that vibrated whenever family members called on them, the defense ministry said.

They also had to pick up golf balls, take care of gardening, do laundry and chauffeur the couple’s children in a private car, the ministry said, adding it is still investigating other allegations.

Park’s wife also has been accused of treating the soldiers as though she was their commander and subjecting them to verbal and physical abuse.

The scandal, which was initially raised by the nongovernmental Center for Military Human Rights Korea, cast a spotlight on South Korea’s system of assigning so-called “housekeeping soldiers” to commanders’ residences.

More than 100 soldiers are on duty at some 90 residential compounds of Army commanders nationwide, according to the Yonhap News Agency.

The Army has launched a review into the operation of the official residence soldier system.

Defense Minister Song Young-moo convened an emergency meeting with top commanders from all the branches Monday to find ways to improve conditions for members of the 625,000-strong military.

"Unless the human rights of troops are protected, the people won't trust our military," Song was quoted as saying.

Issues concerning possible military abuses receive a lot of attention in this U.S.-allied nation because all able-bodied South Korean men are legally required to serve about two years in the military.

The United States maintains some 28,500 servicemembers in South Korea, which is still considered to be at war with the North since the 1950-53 conflict ended in an armistice instead of a peace treaty.

President Moon Jae-in has made military reform one of his main goals since taking office on May 10.

The Center for Military Human Rights Korea said in a July 31 statement that it had received several tips from former and current soldiers revealing years of abuses by Park and his wife, who has been identified only by her surname, Jeon.

The troops were “treated like slaves” by the general’s family members, it said.

The activist group said one soldier suffered such extreme stress from the couple’s demands that he tried to commit suicide in 2015.

The general, who led the army’s 2nd Operational Command, offered to take responsibility for the scandal and to be discharged, but he didn’t confirm or deny the allegations in a text message sent to reporters last week, according to Yonhap.

Moon replaced Park as part of a military-wide reshuffle on Tuesday. But the defense ministry won’t allow him to be discharged while the investigation is ongoing, an official told Stars and Stripes on Tuesday, speaking on condition of anonymity to discuss details.

Park’s wife is being questioned as a witness because she’s a civilian, the official said, adding that nobody has been detained or charged in the case.

The U.S. military has a similar program in which enlisted aides work for commanders and flag officers to help with cleaning, cooking, maintaining uniforms and military equipment and other tasks.

They were even called servants in the past, but that word was replaced with the newly created term “enlisted aide” during Dwight D. Eisenhower’s presidency. Defense Department directives now heavily limit their duties, mandating that they must relate to “the military and official duties” of the officer, and they may not “contribute only to the officer’s personal benefit.”