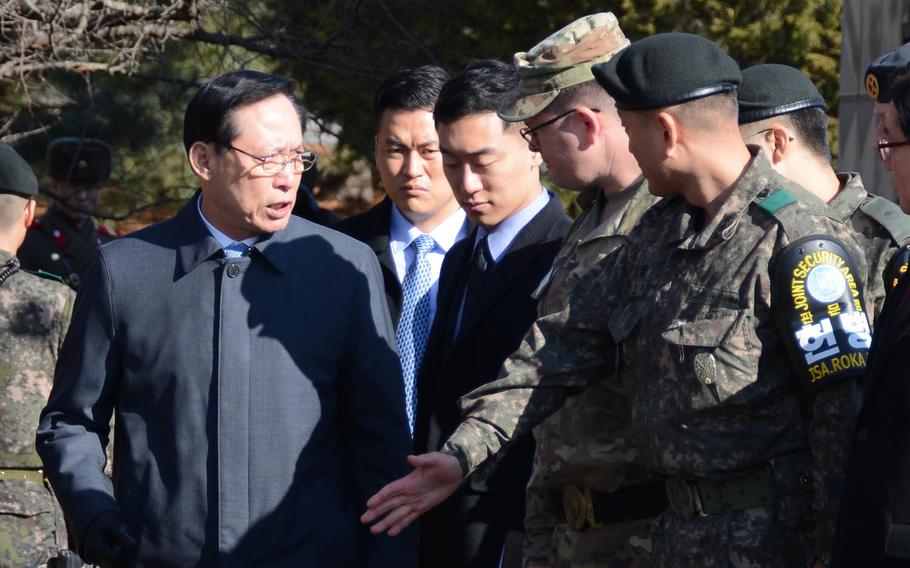 PANMUNJOM, South Korea — South Korea’s defense minister promised to keep it short as he began a speech before eating lunch with U.S. and South Korean soldiers. But the way he said it is getting all the attention.

“When it comes to miniskirts and pre-meal addresses, the shorter, the better,” Song Young-moo said Monday, before heaping praise on the joint security battalion in the jointly patrolled area where a North Korean defector escaped earlier this month.

Song later apologized after coming under heavy criticism on social media and in South Korean media for what many called “inappropriate” remarks, which threatened to upstage his visit to the site of the daring escape on Nov. 13.

He said he was only trying to assure soldiers his speech would be short after arriving late at the mess hall following his tour of the Demilitarized Zone’s Joint Security Area.

“I feel terribly sorry that there was an inappropriate expression different from my real intention,” he said in a statement.

The remark came amid heightened awareness about offensive behavior toward women after the storm of allegations about sexual assaults and harassment unleashed following accusations against prominent film producer Harvey Weinstein. Many commentators on social media warned Song to “watch your words.” Another noted “it could be a joke in the old days, but nowadays it’s sexual abuse.”