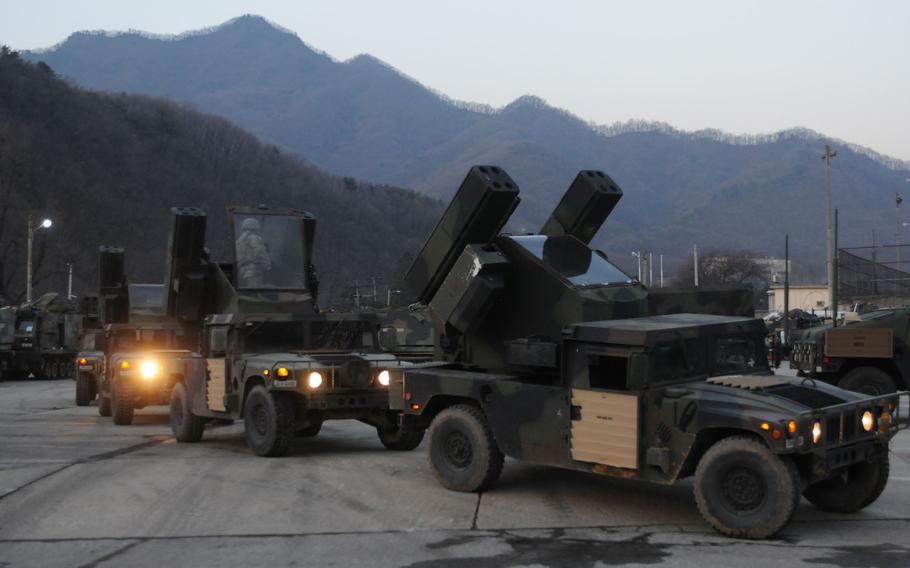 SEOUL, South Korea — The mayor of a city near the North Korean border is seeking $2.7 billion from the South Korean government, claiming the delayed relocation of American troops from Dongducheon is hurting the local economy and redevelopment plans.

City officials say Mayor Oh Se-chang told Defense Minister Han Min-koo that if Dongducheon — home to camps Casey and Hovey — doesn’t see some show of support from the government by the end of the year, the city will consider holding a large demonstration and a nonbinding referendum on whether U.S. troops should remain there.

Approximately 5,900 soldiers are assigned to the 2nd Infantry Division in Area I, which extends from just north and east of Seoul up to the Demilitarized Zone.

“If U.S. troops want to stay in Dongducheon, they should be of help to the local economy or all of them should go away,” a city official said, speaking on customary condition of anonymity. He said troops should be spending more money at off-post Korean-owned businesses instead of shopping solely at post exchanges or other on-base facilities.

The city also wants the government to establish a task force to “manage and lead” government organizations in support of the city’s development plans, according to a document given to Han.

Oh declined an interview through a city spokeswoman, who cited ongoing discussions between the city and U.S. Forces Korea. USFK declined a request for an interview.

Some 1,000 people protested last month near Camp Casey after officials announced plans to keep the 2nd Infantry Division’s 210th Field Artillery Brigade there as a residual force when most U.S. troops move to regional bases south of Seoul in 2016 or ’17, according to South Korea’s Yonhap News. Plans to indefinitely delay the transfer of wartime operational control from 2015 and to leave the combined forces headquarters in Seoul until the transfer of operational control takes place were announced at the same time.

Officials cited the North Korean threat as a reason for the delays.

How many troops will stay and whether other units will remain in Area I have not been decided, according to the 8th Army.

While U.S. and South Korean officials have said little publicly about the negotiations that led to the decision to leave the brigade in place, Scaparrotti told reporters a year ago that “there may be a need, operationally, to leave some residual (troops) in those areas just for proper defense and response.”

The city planned to build a university, an industrial complex and parks on land currently used by U.S. forces. But a city official, speaking anonymously, said Dongducheon now believes that plan is “impossible” because of the postponed handover of the bases and wants to develop another area of the city.

He said the city believes it is losing about 43 billion won, or roughly $39 million, per year as long as troops remain in the city. Much of the money the city is requesting would be used to build infrastructure and other facilities related to Dongducheon’s hoped-for industrial complex and for “convenience facilities” including parks, a gymnasium and a culture and arts center, according to the document given to the defense minister last month.

The official said the declining number of soldiers is hurting the South Korean businesses that used to cater primarily to U.S. troops, but as long as Casey and Hovey remain under U.S. control and prevent the area from being redeveloped, new customers can’t move in.

A spokesman for the Ministry of National Defense USFK Base Relocation Office said Han told the mayor he would “do everything he could” to address the matter and that the ministry is considering the compensation request.

The spokesman, who said Casey is currently projected to return to South Korean control around or after 2020, said the ministry seems to be considering Oh’s request favorably. He also said the Defense Ministry has suggested alternate development plans for Casey after U.S. troops leave.