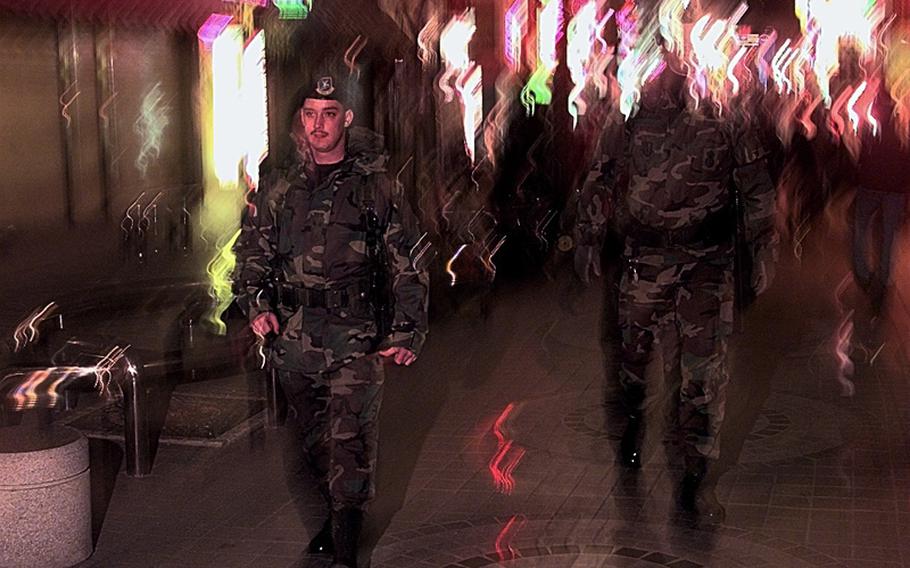 Airmen from the 51st Security Forces Squadron, Osan Air Base, Republic of Korea, patrol the streets outside the base's gates in this file photo from Oct, 31, 1998. (Jeffrey Allen/U.S. Air Force)

SEOUL — A government call center, set up to handle compensation requests from South Koreans who think they are victims of U.S. military wrongdoing, received 255 inquires during its first year of operation, according to the Ministry of Foreign Affairs.

The rest ranged from traffic complaints to requests for copies of the bilateral Status of Forces Agreement, which sets legal rights and privileges for U.S. servicemembers. The document is widely perceived here as unfairly protecting troops who break the law, a sensitive issue in South Korea.

A MOFA official, speaking on customary condition of anonymity, said last month that the success of the SOFA Counseling Center should be judged on whether it helps citizens, not on the number of calls it receives.

“Some people didn’t even know where to get compensation,” she said. “I think the process for them moved more easily and quicker than it did before the center opened.”

“The intent of the center is to minimize inconveniences to people,” liaison with other organizations and conduct public relations work, MOFA said in a statement earlier this year.

Opened in April 2013, the center provides counseling and legal assistance to people alleging they were victims of USFK crime and advice on alleged property damage due to U.S. military activities, such as environmental pollution from bases or crop damage from aircraft crashes.

“We’re not making this center with bad intentions toward USFK,” a MOFA official told Stars and Stripes as the center prepared to open. “We are doing this to explain the (compensation) procedures to people.”

The center’s Korean-language website includes contact information for USFK and South Korean offices and explains what kind of documentation victims might need to provide. For instance, women claiming sexual abuse by U.S. troops can call a hotline for counseling and support, then contact the national prosecutor’s office to pursue compensation from USFK.

MOFA would not say how many complaints have led to callers receiving compensation or to charges being filed against USFK personnel, referring questions to USFK and the Ministry of Justice. The ministry said it was “inappropriate” to answer those questions because it does not oversee the call center. USFK referred questions to the call center.

Citizens who are hurt by USFK personnel can receive money from the South Korean government through a state compensation system. Procedures differ on whether the damage was caused by troops who were on or off duty.

MOFA said earlier this year that it has received a steady number of inquiries each month, though it refused to provide a month-by-month breakdown. However, Stars and Stripes was told that the center received 47 inquiries during a 4 ½ month period ending May 7.

Complaints received (as of May 7)

Civil cases: 47 General SOFA cases (includes questions about where callers could find copies of the Status of Forces Agreement, when it was revised, and other questions about its content): 45 Labor: 44 Criminal cases: 37 Traffic violations: 31 Noise: 14 Commerce/business: 11 Immigration (in and out into South Korea): 5 Installation zone: 7 Environment: 7 Local procurement (how Korean businesses can sell materials or labor to USFK): 3 Non-appropriated funds organizations (includes questions about how to make purchases or gain access to USFK commissaries or restaurants): 2 Disease control: 1 Animals and plants: 1Source: South Korean Ministry of Foreign Affairs