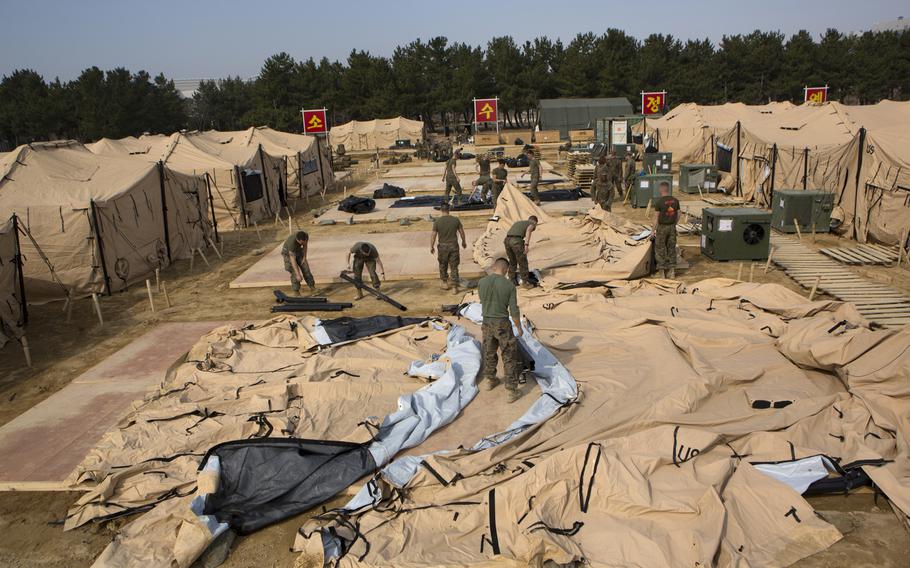 SEOUL — South Korean lawmakers this week are expected to vote on a controversial defense cost-sharing agreement that has sat untouched for months in the National Assembly, even as the resulting funding shortage has forced the U.S. military to take drastic steps to avert mass furloughs of its Korean employees.

The U.S. and South Korea reached an agreement on the latest Special Measures Agreement — which sets Seoul’s annual contribution toward the upkeep of the 28,500 U.S. troops regularly stationed on the peninsula — in January after months of negotiations. However, the agreement won’t go into effect until it is approved by the National Assembly, where it has faced stiff opposition from politicians who claim it obligates Seoul to pay too much money while not giving them enough oversight of how U.S. Forces Korea spends the funds.

The latest SMA requires Seoul to increase its contributions 5.8 percent in 2014, and — despite complaints about the lack of transparency — requires USFK to submit reports to the Korean government about its spending of those funds. In addition to paying 920 billion won, or about $866.6 million annually, South Korea will make unspecified contributions toward labor, logistics and construction. The previous SMA, signed in 2009, set South Korea’s annual contributions at $775 million with provisions for inflation increases.

South Korea has offset the costs of the stationing of U.S. troops in the country through SMAs since 1991.

Failure to approve the SMA would be a major source of embarrassment for conservative South Korean President Park Geun-hye, particularly as she prepares to welcome U.S. President Barack Obama to Seoul next week, analysts say.

“It’s a good sound bite for your constituents that you’re trying to save money for the taxpayers,” said Daniel Pinkston, based in Seoul for the International Crisis Group.

Bruce Bechtol of Angelo State University in Texas said that failure to pass the SMA would be a major setback to the Park administration, and would send the message to the U.S. that — rightly or wrongly — South Korea isn’t shouldering its share of the burden of defending the peninsula.

Last month, Park urged the National Assembly to pass the agreement, warning that not doing so would harm South Korean workers and companies hired by USFK and could hurt the nation’s credit rating.

Under the SMA, South Korea normally funds as much as 71 percent of the salaries of USFK’s Korean employees. A funding shortfall caused by the National Assembly’s failure to ratify the agreement led USFK to announce in February that thousands of those workers could be furloughed on April 1. However, USFK announced last month that it would make up the shortfall in order to avoid furloughs.

A key roadblock to ratification of the agreement has been the supposed lack of oversight of USFK’s use of South Korean funds, a perception that has been widely disseminated in the media and by some politicians. However, South Korea’s foreign ministry has previously declined to comment on why Seoul believes its oversight of defense fund spending has been inadequate. A February report to Congress on U.S.-South Korea issues said that in response to South Korean criticism, the latest agreement makes U.S. use of SMA funds more transparent by requiring South Korea’s Ministry of National Defense to approve every contract using those monies. USFK is also required to submit an annual report on its use of SMA funds to the National Assembly.

“Even with these changes, Korean opposition lawmakers complained that the agreement is ‘humiliating,’ “ the report said.

It also noted that some lawmakers believe the U.S. might use SMA money to fund some of its relocation to installations south of Seoul, which would be a violation of a 2004 agreement.

Yang Uk, a senior research fellow of the Korea Defense and Security Forum in Seoul, said he believes the controversy surrounding the agreement is simply an example of the normal tug-of-war between opposing political parties, and that the National Assembly will ultimately end up ratifying the agreement as it have done with previous SMAs.

If it doesn’t, South Korea will come under fire for trying to get a free ride from the U.S.

“There could be a misunderstanding on both sides, so we need to handle this quickly and carefully and make sure there is no apprehension between the two allied nations,” he said.