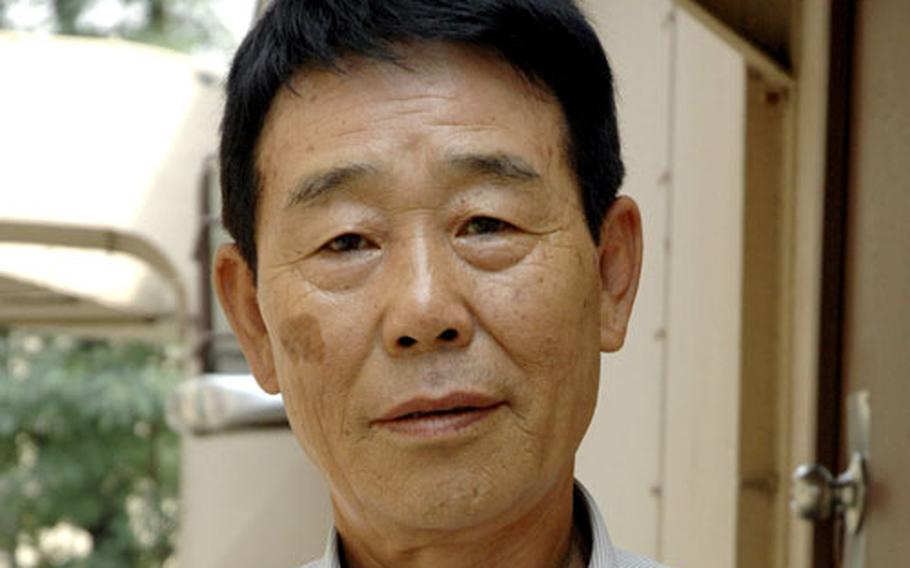 Chung Hwa-kyom, better known as Charlie, has worked at Yongsan Garrison in Seoul for 47 years. At 72, he was forced to retire. (Teri Weaver / S&S)

YONGSAN GARRISON, South Korea &#8212; Woodrow Jackson grew up without a father, but eight years ago he met someone at the American Forces Network offices in South Korea that he says now fills those shoes: Chung Hwa-kyom, or Charlie, as he&#8217;s known at work.

Chung&#8217;s day came Thursday, his last day working on Yongsan Garrison after 47 years. He was showered with praise, recognition and thanks for his work that started when he was a kitchen helper in the long-gone AFN Club and most recently as a warehouse worker who helped keep the broadcasting crew&#8217;s equipment in order.

But Chung would have preferred to stay, both he and his colleagues say.

Chung, 72, got a letter in July saying that he must retire by the end of August. He had long ago surpassed the mandatory retirement age of 60 for South Korean workers, but like many others he had been granted waivers to continue through the years.

Now workers like Chung are being moved out to make way for younger South Korean staff as U.S. Forces Korea and its component commands prepare for the downsizing and adjustments needed in the next few years.

Everyone&#8217;s main goal is to avoid as many layoffs as possible, said Chi Hyon-taek, USFK Korean Employees Union president. But that also means there will be fewer spots for workers like Chung who&#8217;ve spent much of their lives working on American bases, Chi said.

&#8220;Our No. 1 priority right now is how to secure our job and how to prepare ourselves for an uncertain and very gloomy future,&#8221; Chi said.

The union has 11,000 members, and Chi said last week he&#8217;s unsure how many positions will be left once the U.S. military finishes its own downsizing and moves most of its forces south of Seoul to Pyeongtaek.

For example, Camp Hialeah, in the southern city of Busan, closed and more than 200 workers left their base jobs, said Kim Yong-tae, a labor adviser for USFK and U.S. 8th Army. Technically, there were no layoffs. Those workers younger than 60 with permanent status were offered jobs at other bases, but some chose not to take the jobs or relocate, Kim said.

Chi also said no layoffs had happened to date, but that many people are waiting to see what might happen down the road.

Eighth Army officials are preparing as well. A job training program in place will allow up to $1,100 in training costs for each laid-off permanent worker, and those taking the training can get paid up to 20 hours per week to attend classes, according to USFK. The program was established in the summer of 2005, but no one has used it to date, according to USFK.

There&#8217;s a hiring freeze for all USFK jobs for South Koreans, both men said. That means all open slots are filled from the existing pool of workers, Kim said. If a new person must be hired, that person will be put on the rolls as a temporary or contract worker and will not have the same job guarantees as a permanent worker, he said.

Gradually, Chi said, more older workers like Chung will be forced to leave.

Chung said he learned English from soldiers at work and helped raise two sons and two daughters at home. On his days off, he travels east to Incheon to fish.

Now, in retirement, he could fish more. Except for one thing.