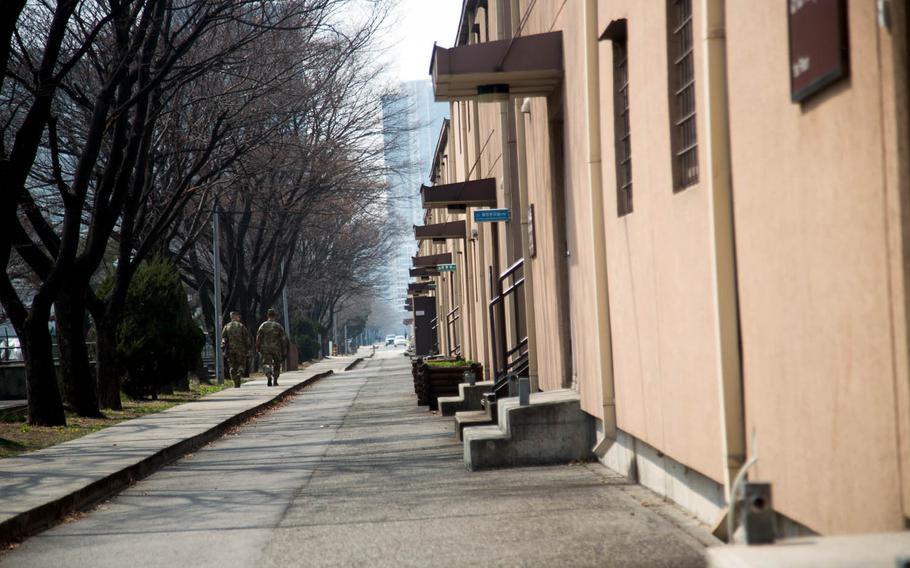 Three groups, which obtained documents detailing incident reports from 1990-2015 after filing a Freedom of Information Act request, said the number and scale of the spills were much greater than those made public by U.S. Forces Korea or the South Korean government.

Though the largest spills happened more than a decade ago, activists expressed concern about the lack of transparency and the possibility of continued water contamination as USFK plans to turn over much of the massive compound to South Korea in coming years.

“The critical question for negotiations is who will take responsibility for the environmental pollution at Yongsan garrison before it’s returned,” the groups said in a statement.

The seven largest spills — recorded between Oct. 2, 1997, and May 14, 2002 — ranged from 1,250 gallons of jet fuel known as JP-8 to 7,620 gallons of diesel, according to a table provided by the groups. They said USFK had shared information about the two largest accidents with the South Korean government but apparently not the others.

The amounts in recent years have been smaller, but several spills also were reported with the amount listed as unknown, the groups said.

“The main sources of the oil spill incidents were aging oil storage tanks and piping,” the statement said, adding that it was often difficult to know when the leaks began with regard to underground tanks.

The groups Green Korea United, Lawyers for a Democratic Society and the Association of Residents to Recover U.S. Army Garrison Yongsan called on USFK to apologize and offer full transparency. They also demanded a joint U.S.-South Korean investigation that includes city government officials and experts recommended by civic groups.

“We cannot leave the Yongsan base return issue to be dealt with only by the irresponsible U.S. military and incompetent Korean government,” Kim Eun-hee, a member of the residents’ organization, said at a press conference to release the findings.

“Since the records confirm that the oil spill incidents at Yongsan garrison have occurred on a large scale, the suspicion of residents can only be resolved once a U.S.-Korean joint investigation team has been formed,” she added.

“Our responsibilities are defined in SOFA and relevant agreements, and USFK and [the South Korean government] have a time-tested, reliable and effective agreed upon process for addressing health and environmental concerns,” it said in an email. “Our number one priority remains ensuring the continued health and safety of our service members, families, civilian workforce, and Korean neighbors.”

Activists and residents have long expressed concerns about possible water and soil contamination from oil spills on U.S. bases in South Korea, particularly an area near the trendy Itaewon neighborhood adjacent to Camp Kim. But the issue has taken on new urgency as the repeatedly delayed plans for relocating the bulk of U.S. forces in South Korea to a base south of Seoul gain momentum.

The city has said in the past that it plans to turn the base into a park after the land is reclaimed.

In 2000, the 8th Army commander apologized after the military discharged untreated toxic waste into the Han River, a main source of drinking water for Seoul.

The Seoul city government said last year that tests had shown the levels of benzene and other contaminants were more than 500 times the standard in underground water. It has reportedly spent more than $400,000 a year since 2004 in cleanup efforts.

South Korea’s Environmental Ministry reportedly commissioned three studies of contamination on Yongsan between May 2015 and August 2016 but has not released the results.

A ministry official said a decision to publicize the results must be made jointly with USFK via a joint subcommittee, according to the allies’ status of forces agreement.

“We can’t give a definite answer right now because the subcommittee needs to discuss it with USFK,” the official said, speaking on condition of anonymity.

The United States maintains 28,500 servicemembers in South Korea, which remains technically at war with the North after the 1950-53 conflict between the two countries ended with an armistice instead of a peace treaty.