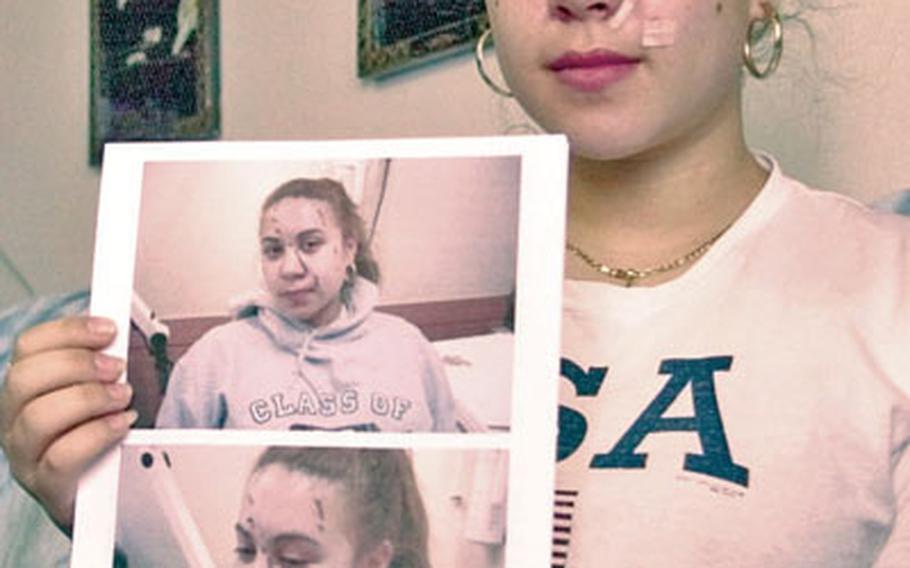 Jasmyn Chambers, 18, shows pictures from the hospital on Feb. 25, the day Pfc. Christoper Myers allegedly sliced her face with a broken beer bottle outside a Seoul nightclub. South Korean officials have decided not to prosecute Myers. (Erik Slavin / S&S)

SEOUL &#8212; South Korea will not charge a soldier accused of smashing a broken bottle into a Seoul American High School student&#8217;s face in an off-base nightclub district, a Seoul prosecutor said Thursday.

Pfc. Christopher Myers, 20, still faces aggravated assault charges brought by U.S. Forces Korea in connection with an attack on Jasmyn Chambers, 18, outside an off-limits nightclub in the Hongdae District on Feb. 25.

&#8220;We decided that USFK would exercise jurisdiction&#8221; over the case, said Kweon Jung-hun of the Seoul Sebu District Prosecutors&#8217; Office.

Chambers&#8217; father contends the decision to turn down the case may make it more difficult for his daughter to recover medical costs or any punitive damages.

Myers admitted he threw the bottle but said he was not aiming at Chambers, according to South Korean police who questioned him in March.

Chambers suffered a deep cut over her nose and several others across her face, requiring about 80 stitches.

She faces ongoing cosmetic surgery to minimize scarring, which her insurance may not fully cover, said her father, Yongsan Garrison contractor Jim Chambers.

Since military law has no provision for civil penalties, Chambers would have to file civil charges in South Korea.

But Jim Chambers said he isn&#8217;t optimistic about getting a South Korean civil ruling enforced in the United States.

And if Myers is found guilty and sent to prison, he may not have the income to pay restitution, Jim Chambers said.

Although Myers initially was arrested by military police after he returned to post on Feb. 25, South Korea had primary jurisdiction because the incident occurred off post outside Stompers nightclub at 4:30 a.m.

Jasmyn Chambers has said that Myers was inciting a man to fight her friend while holding a bottle.

She&#8217;s said that when she asked him for the bottle, Myers threatened to cut her if she persisted.

When she did, Jasmyn Chambers alleged, he followed through on his threat.

He said he had to learn through U.S. Forces Korea that the Seoul prosecutors had declined to pursue the case.

Jasmyn Chambers, who has said she kicked and scratched Myers as he attempted to leave that night in a taxi, was unavailable for comment Thursday evening.